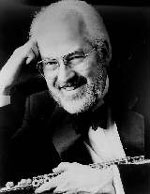 Fenwick Smith is a member of the Boston Chamber Music Society, the Boston Symphony Orchestra and, with violist Burton Fine and harpist Susan Miron, the Mélisande Trio. His annual Boston recitals enjoy consistent popular and critical acclaim for their imaginative programming and high musical standards. Mr Smith's Hyperion recording of Koechlin's flute music is the result of a five-year investigation of the composer's solo and chamber works with flute, an undertaking which resulted in numerous performances and four world premieres.

Fenwick Smith is a faculty member of the New England Conservatory and the Tanglewood Music Center. He worked for ten years as a flutemaker for Verne Q Powell Flutes Inc, and plays a Powell flute which he built himself.