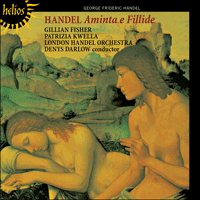 ‘Strongly recommended’ (Gramophone)
‘The string ensemble of the London Handel Orchestra under Denys Darlow gives lively and reasonant support to the voices and the recorded sound is clear and pleasantly balanced. First-class presentation by Donald Burrows and Anthony Hicks is complemented by Platzer's striking miniature of a youthful Handel. Strongly recommended’ (Gramophone)
‘A suitably pastoral cantata, it depicts the shepherd Aminta’s wooing of the initially reluctant nymph in a series of charming arias’ (BBC Music Magazine)
‘Outstanding’ (The Guardian)
‘Even after 17 years this performance still dazzles. Significantly, no other group has touched the cantata since the disc was made. One can understand why: its charms would be hard to match. A celebration of Handel’s youthful genius, this recording fully deserves its reissue’ (International Record Review)
‘The two singers are superb … the purity of their voices, the splendid intonation and the secure high notes are worthy of our sincere admiration’ (MusicWeb International)

In the autumn of 1706 Handel travelled to Italy. By then he had three years of valuable experience with the Hamburg Opera to his credit, and he went to Italy with the encouragement of the Prince of Tuscany. According to John Mainwaring’s Memoirs of the Life of the late George Frederic Handel (the first biography of the composer), Handel had been assured by the prince that ‘there was no country in which a young proficient could spend his time to so much advantage, or in which every branch of his profession was cultivated with so much care’. And so it proved. In Italy, Handel’s style matured, and matured quickly. By the time he composed Dixit Dominus in April 1707, all of the essential elements of a fluent musical technique were in place and he had cast off the occasional clumsiness which is apparent in his Hamburg opera Almira. He remained in Italy until early 1710. During his three-and-a-half years there he moved around as opportunities presented themselves. He composed two operas: Rodrigo was produced in Florence, Agrippina in Venice. His extended cantata Aci, Galatea e Polifemo was composed for ducal wedding celebrations in Naples.

The details of Handel’s itinerary pose problems that have teased scholars for a century, and some matters are still uncertain. However, it is clear that in addition to the places already named, Rome was an important base for Handel, and one to which he returned several times. Although there were no opportunities for opera in Rome, other musical activities flourished there and it was an important cultural centre for those with musical or literary interests. Musicians gathered in the city under the encouragement of a group of cultivated patrons and found congenial, artistically rewarding employment. Corelli, the famous violinist whose music was the classic model for the Italian instrumental style, was established there: he led the orchestra for the first performance of Handel’s oratorios Il Trionfo del Tempo and La Resurrezione. Corelli’s trio sonatas published as Op 2 and Op 4 bore dedications to the Cardinals Panfili and Ottoboni, names familiar from Mainwaring’s Memoirs as two of Handel’s Rome patrons.

As it happens, the Memoirs do not mention the name of the man who was probably Handel’s most significant Roman patron, though perhaps rather inferior in fame and status to the cardinals, the Marquis (later, Prince) Ruspoli. The extent of Ruspoli’s patronage only became clear in 1967 when Ursula Kirkendale’s transcripts of documents from the Fondo Ruspoli in the Archivio Segreto Vaticano were published. In addition to the extensive material concerning the first performance of La Resurrezione, these documents include copyists’ bills for nearly fifty of Handel’s Italian cantatas and three of his Latin motets, and details of occasional payments which identify the performers in the cantatas and motets. Ruspoli employed Handel for three extended periods during 1707/8. It was apparently the composer’s task to provide a new (secular) cantata each week for the Sunday conversazione, and other cantatas for special occasions as required. In addition to his palace in Rome, Ruspoli had country estates at Vignanello and Cerveteri, and Handel presumably followed him round the circuit of his residences.

Most of the cantatas are for solo voice accompanied by basso continuo (harpsichord, presumably played by Handel himself, and ’cello), but on some occasions Handel had two singers available or was allowed to splash out a little with cantatas ‘con stromenti’. Aminta e Fillide is one of these more ambitious cantatas. There is no copying bill for the music of the cantata in the Fondo Ruspoli, but the date of its performance is established by a payment to two additional violinists for Saturday 14 July 1708. The performance was a special occasion, not part of one of Ruspoli’s regular conversazioni but a contribution to celebrations of the Arcadian Academy.

The Arcadian Academy originated from the activities of a group of men of letters who had gathered in Rome under the patronage of Queen Christina of Sweden. Christina, a convert to Roman Catholicism, fled to Rome after abdicating her throne and established herself there as a generous supporter of the arts. She was CoreIli’s principal Roman patron in the year immediately preceding his engagement by Panfili and is reputed to have engaged an orchestra of 150 under his leadership for the performance of an opera by Pasquini. She died in 1689 and in the following year the Arcadian Academy was founded in her honour by members of her former artistic circle. The original objects of the Academy centred around literary reform, particularly with regard to the pastoral style, which they hoped to reform from the extravagances (as they saw them) of its seventeenth-century Italian manifestations to a simpler mode based on Aristotle’s rules on tragic poetry.

All members of the Aracadian Academy assumed pastoral names, and the reed-pipes of Pan became the Academy’s symbol. The baby Jesus was chosen as the Academy’s ‘protector’, on the grounds that simple shepherds of Bethlehem had been the first to receive news of the Saviour’s birth. Naturally, the members of the Academy varied in their emphasis on literary reform and did not always share the same interpretation of the Arcadian ideal, but as the Academy developed it provided an important forum for the discussion of literary topics and its programmes gave opportunities for the performance of new pastoral works, poetic, dramatic and musical. According to Giovanni Maria Crescimbeni, who published a history of the Academy’s progress in 1712. the Arcadians gained 1300 members in their first twenty years and had 114 ‘colonies’ outside Rome. Inevitably, however, the true home of the Arcadian movement remained in the place of its foundation.

In September 1707 Ruspoli succeeded Prince Giustiniani as ‘host’ of the Roman Arcadian Academy. The meetings of the Arcadians were held in the warmer months so that the ‘shepherds’ of the Academy could convene out-of-doors without interruption from some of nature’s less idyllic activities. Aminta e Fillide was almost certainly composed for, and performed at, the first general meeting of the Arcadians in 1708. The venue was Ruspoli’s garden south of San Matteo in Merulana; the performers were provided by Ruspoli. Since only two additional violinists were paid, the remaining musicians must have been in Ruspoli’s regular employment. The solo parts were probably sung by the sopranos Durastante and Mariticcia, and the orchestral parts were performed by perhaps as many as five violinists (one doubling viola where necessary), a single cellist (possibly in company with a bass viol) and Handel at the harpsichord. Ruspoli showed the same discrimination in his employment of performers as he did in his choice of resident composers, and we may be sure that the ensemble did full justice to Handel’s new cantata. Interestingly, the performance may have included four musicians with whom Handel worked some years later in the London opera house—Durastante, the violinists Domenico and Pietro Castrucci, and the cellist Amadei.

The characteristic material of pastoral drama has been summed up as ‘shepherds and shepherdesses engaged in amorous pursuits against an idyllic pastoral backdrop’. Aminta e Fillide falls happily within this description. For the physical ‘backdrop’ we have to imagine the Arcadians’ ideal bosco (wood): no doubt Ruspoli’s garden served well enough for this. The line of argument by which Amyntas wins his suit is rather esoteric, but we are dealing in the conventions of an ideal world where constancy and fidelity eventually melt the ‘cruel heart’ of the lady. After the initial excitement of the furioso section of the overture (which presumably represents Amyntas’ pursuit of the fleeing nymph), the pace of the drama is leisurely, unfolding through eleven full da capo movements. The affects of the individual moments in the drama are well characterised musically, and so the arias themselves have considerable variety.

Handel also skilfully varies the texture of the orchestral accompaniment from aria to aria, ranging from a continuo-accompanied aria at the simplest to a four-part string arrangement with internal solo/tutti contrasts at the most complex. The high proportion of ‘compound time’ arias (five out of eleven, plus considerable triplet movement in ‘Fu scherzo’) reflects perhaps a characteristic and appropriate musical reaction to the pastoral style. Handel has a firm control over the longer-term aspects of key structure. A tonic area of G minor/B flat major surrounds the more distant keys of ‘Se vago rio’ and ‘Sento che’, the turning-points in the drama. In ‘Forse un giorno’ and ‘Fu scherzo’ Aminta’s part is in G minor, Fillide’s in B flat major: by ‘AI dispetto’ and ‘Vincesti, Aminta’ their key-centres and modes have been reversed. As to the quality of individual movements, Handel gave his own implicit testimony when he quarried the cantata for his subsequent operas. Some music went into Agrippina; the first movement of the overture was transferred to fulfil the same role in Rinaldo, Handel’s first London opera, and ‘Se vago rio’ became the mermaids’ song ‘Il vostro maggio’ in Act 2 of the same work.

As already noted, no payment to a music copyist for Aminta e Fillide is recorded in the Fondo Ruspoli. Nevertheless, a score of the cantata copied mainly by Angelini, Handel’s principal Roman copyist, survives in company with other ex-Ruspoli music in the Santini Collection at Münster. This score helps to interpret Handel’s surviving autograph of the cantata and supplements it in one important respect. All the music from the beginning of the aria ‘Chi ben ama’ to the beginning of the final duet was a last-minute addition. If we only had Handel’s autographs as evidence we would probably assume, as Friedrich Chrysander did a century ago when he published Handel’s cantatas for the first time, that ‘Chi ben ama’ was an independent work. The Münster score shows where the music fits within Aminta e Fillide. Furthermore, it reveals that Handel changed his mind on one important matter even after he had completed his autograph of the additional music. The aria ‘Non si può’, composed in G major in Handel’s autograph, appears in B flat in the Münster score, with the preceding recitative recomposed to accommodate the change. The newly-worked recitative is in Handel’s own hand, so there is no doubt about the authenticity of the final arrangement.

The present recording has been made according to Handel’s intentions as shown in the Münster score. Having restored the cantata to its most complete form, it is now difficult to imagine it without the lines which might serve as its motto: