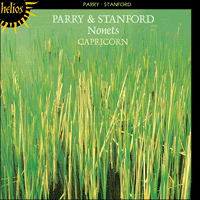 ‘The performances are clean and contained, but also affectionate, with recordings fresh and sensitively balanced’ (BBC Music Magazine)
‘The music will give uncomplicated delight’ (Fanfare, USA)

In spite of the considerable technical developments in the design of wind instruments during the nineteenth century, the repertoire of wind music written during that time is surprisingly slender. During the Classical era, the genres of Harmoniemusik, and to a lesser extent the military wind band, had provided useful and interesting opportunities for composition. A large quantity of it was written purely and simply for light entertainment – a typical example being the Haydn divertimenti. However, the more intimate nature of, for example, Mozart’s serenades, indicate that there were also moves to explore the more serious possibilities of the idiom. Yet once the ideals of Romanticism had taken root later in the nineteenth century, the attractions of wind music dwindled considerably in preference to the expressive potential of strings. Certain works come to mind as important landmarks: Brahms’s Serenade in A (Op 16) for wind and lower strings (1858/9), Dvorák’s Serenade in D minor (Op 44, 1878), Strauss’s Serenade in E flat for 13 wind instruments (1881), and Gounod’s Petite Symphonie (1885, though not published until 1904).

Parry’s Nonet in B flat, written in 1877 as an ‘experiment’ as he himself described it, pre-dates the aforementioned works by Dvorák, Strauss, and Gounod. It was begun in October, and soon after the first ideas were conceived and committed to paper, Parry took it to his teacher, Edward Dannreuther. By 4 November the first movement was completed. Three weeks later the Scherzo and slow movement were finished, leaving the Finale which, having given him more problems than the other movements, was eventually completed on New Year’s Eve. Only two further references are made to the work, on 4 and 5 February 1878, when Parry was correcting the parts. Curiously, however, it appears that though a performance was evidently contemplated, one was never given during the composer’s lifetime, and it was not until 1937 that the work was heard for the first time.

Besides the intimate concerts at Dannreuther’s home at 12 Orme Square, Bayswater, where most of Parry’s chamber works were first performed, the other main focus of his attention was the regular series of concerts at the Crystal Palace. Dannreuther, as a celebrated concert pianist, provided his pupil with an introduction to the orchestra and their resident conductor, Sir August Manns, who subsequently gave the first performances of Parry’s unashamedly Wagnerian concert overture Guillem de Cabestanh (March 1879) and the Piano Concerto in F sharp with Dannreuther as soloist (April 1880). Therefore it is quite likely that the Nonet was composed for the wind players of the Crystal Palace orchestra and may have been rehearsed by them. But after February 1878 there is no further mention of the Nonet. The fact that it was not published may suggest that Parry was characteristically dissatisfied with the score and decided to shelve it as he did with so many other substantial instrumental works from this period, such as the Concertstück in G minor (1877), the Fantasie Sonata in B (1878), Guillem de Cabestanh (1878-9), the String Quartet in G (1878-80), and the Piano Concerto (1879/80).

A second reason may have been the purpose of its composition – that it was nothing more than a serious exercise in experimental form and wind orchestration. In the summer of 1874 Parry had heard Brahms’s Serenade, Op 16, performed at the Philharmonic Society, which had delighted him. The score was immediately acquired and taken by him to Mount Merrion near Dublin, the Irish seat of his brother-in-law, the Earl of Pembroke, where it was fastidiously copied out. Besides being a useful means of studying contemporary compositional technique, it was without doubt a valuable lesson in orchestration.

Yet even though Parry may have absorbed Brahms’s manner of instrumentation from the Serenade, the Nonet’s combination is unusual for its inclusion of a cor anglais instead of a second oboe. Moreover, its musical style is not so redolent of Brahms’s intellectualism as are Parry’s other chamber works. Indeed, the intense cyclic nature of the Nonet reflects Parry’s fascination for Schumann and Liszt (as does his Fantasie Sonata).

The first movement introduces a three-note ‘motto’ figure, B flat-D-F (a), played in unison, which prefixes the opening lyrical theme. This then leads into a second idea (b) characterised by its declamatory dotted rhythm and fluctuating harmonic progressions. After a second statement of the ‘motto’ figure, the music makes a sudden tonal deviation to the flat submediant where we are introduced to the third idea (c), built on a descending arpeggio. The second group, equally rich and thematically full of contrast, is dominated by (a), as is the extensive and tonally exploratory development. Furthermore, Parry’s appetite for structural experimentation can be heard in the somewhat dramatic and strikingly unconventional recapitulation. Particularly arresting are the emphatic octaves on the tonic played by the whole ensemble, contradicted by the abrupt shifts to an A flat minor triad, after which the first group begins its restatement in the ‘wrong’ key.

The Scherzo consists of two main ideas, the first based on (a), the second on (b), while the trio (marked ‘meno mosso’) is a sort of pastoral evocation replete with drones and shepherd’s pipe tune. The slow movement, which more readily reveals Parry’s interest in Wagnerian harmony, incorporates the motto idea more subtly. In the opening song-like melody, (a) is more elusively situated towards the end of the horn’s descending phrase, and then later influences the basic outline of the second-group material.

The Finale represents the climax of the work’s cyclic construction, in that the principal themes from previous movements form the basis of the movement’s sonata structure. The first group recalls (a), (b) and (c), which undergo slight modification owing to the change of metre. The main slow movement theme and the trio section of the Scherzo form the basic material of the second group. However, the ultimate climax of the entire cyclic scheme – a thematic tour de force – is reserved for the coda, where many of the major themes appear simultaneously over a protracted dominant pedal.

The instrumental combination of Stanford’s Nonet, Op 95, is less unusual than Parry’s in that it conforms to the more conventional nineteenth-century scoring of wind and strings, as deployed by Spohr, Onslow and Rheinberger. Stanford differs slightly, however, in dispensing with the oboe and adding a second violin. The work was written in London in June and July 1905, the year in which Stanford had been engaged in the composition of his Sixth Symphony, Op 94, ‘In memoriam G F Watts’, as well as enjoying some international success with his Requiem, Op 63, in Düsseldorf.

The Nonet was played at a Broadwood Concert in The Aeolian Hall in London on 25 January, 1906, and was received with great favour. The critic of The Times was full of praise the following day in drawing attention to the work’s spontaneity, charm, and classical purity of structure. Parry, who was privately Stanford’s severest critic, also heard it and was similarly impressed. Later he heard it again in March 1913 played by a student ensemble at the Royal College of Music when he described it as ‘a nice specimen of his [Stanford’s] work’.

The light mood and texture of the Nonet (hence its title ‘Serenade‘) provides refreshing relief to the Brahmsian earnestness essayed in many of Stanford’s chamber works, notably the Cello Sonata in D minor (1893) and the Piano Trio No 2 in G minor (1899). Nevertheless, he symphonic nature of its composition clearly betrays Stanford’s Teutonic allegiance in the province of instrumental music – a feature especially apparent in the first movement. The Scherzo in A minor is perhaps the most original movement as the first part of the ternary structure is a set of highly inventive variations that vary in tempo, metre and phraseology. Stanford also derives the material of his trio from the Scherzo theme which, besides providing much needed tonal contrast, effectively serves as a further, more protracted variation. The slow movement has a vein of nostalgia evoked by the diatonic simplicity of the clarinet’s ‘vocal’ melody. Here we are reminded of similar gestures in Stanford’s Irish Rhapsodies, a connection reinforced by the more mystical and imaginatively orchestrated central idea. A humourous, lopsided, eleven-bar theme dominates the lighthearted finale which, in its coda, alludes wittily to material from previous movements.