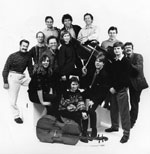 Capricorn was formed in 1973 and received outstanding critical acclaim for its London début, since when the group has established itself in the forefront of British chamber ensembles, becoming well-known for its deeply committed playing of a wide repertoire from the classical era to the present day.

In 1975 Capricorn made the first of many visits overseas, winning a special prize at the Gaudeamus International Competition in Rotterdam. The ensemble has appeared regularly on radio and television throughout Europe, and at festivals including those of Aldeburgh, Almeida, Cheltenham, Edinburgh, Holland, Huddersfield, Nuove Sincronie in Milan, and Aspekte in Salzburg, and at the BBC Proms. Capricorn has given premieres of many new works and has commissioned pieces from numerous composers. In 1994 they celebrated their twentieth anniversary with a retrospective series of some of the outstanding works commissioned over the years.