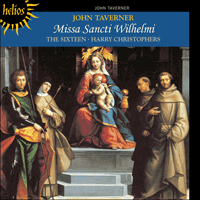 Cover artwork: Madonna and Child with SS William of Aquitaine, Clare, Anthony of Padua and Francis by Garofalo (?1481-1559)

O Wilhelme, pastor bone is one of Taverner’s more forward-looking and immediately attractive compositions, written in an uncomplicated note-against-note style, with largely syllabic text setting and systematic alternation of choral groupings. There are only two surviving sources, dating from the 1540s and the 1580s, both of which give the first line as ‘Christe Jesu, pastor bone’. Nevertheless, it is now thought that the text was originally addressed to St William, twelfth-century Archbishop of York, and that the second verse included a prayer for Cardinal Wolsey. The statutes of Cardinal College required that antiphons to St Mary, the Holy Trinity, and St William be sung daily after Compline. Wolsey was Archbishop of York, and the tercentenary of his predecessor’s canonisation fell a few months after Taverner’s appointment to the College, so that it is quite likely that a special setting of St William’s antiphon should be written for celebrations of that event. It would have been a simple matter, after the re-founding of the College, to adapt the text so that it became a Jesus antiphon with a prayer for the king in the second verse; in the 1580s it was altered once again into a prayer for Queen Elizabeth.

In his setting of the Easter respond Dum transisset Sabbatum Taverner only composed polyphony for those portions of the chant which were sung by the full choir. In this he reversed the hitherto normal procedure for respond settings, and was perhaps reflecting the fact that at a richly endowed foundation like Cardinal College the entire choral body was skilled in the singing of polyphony. In common with Taverner’s other responds, the plainsong is sung in notes of equal value in one voice, in this case the tenor. The resultant ‘scaffolding’ creates a regular harmonic rhythm within which the other four voices combine in counterpoint which features a significant amount of imitation for this type of composition, suggesting that it is a comparatively late work.

The only texted source of the music performed here (customarily identified as the second of Taverner’s two five-part settings) is a rather retrospective anthology compiled about 1581, by which time the respond no longer had its original liturgical function, and the breaks in the polyphony required by the traditional formal scheme have become obscured. In this recording the sectional divisions have been restored, so that the work is heard in its probable original form.

Since the Missa Sancti Wilhelmi incorporates passages from the antiphon O Wilhelme, pastor bone, it is possible that the title ‘Small Devotion’, found in two of the sources, is in fact a scribal corruption of ‘S Will devotio’. Taverner borrows from his antiphon at the beginning and end of the Gloria and in the Agnus Dei. Elsewhere the Mass is newly composed, so that it does not make the extensive and systematic use of a model that was characteristic of the fully developed sixteenth-century ‘parody mass’. The four movements (the Kyrie, as was the English custom, not being set) are instead unified through a consistency of style, mode, vocal scoring, and formal proportion.

The Mass is scored for five voices, within which Taverner makes effective use of contrasting high and low groups. Simple and clear textures, and extensive use of imitation, combine to create a decidedly more ‘modern’ music than is found in his large-scale and elaborate six-voice masses. The ‘long’ movements, the Gloria and Credo, are set in a functional, predominantly syllabic style, while the Sanctus-Benedictus and Agnus Dei are given melismatic treatment, so that the four movements are balanced in length and weight. Overtly expressive writing is limited to the conventional pauses at ‘Jesu’ and ‘Et homo factus est’, but Taverner achieves a marvellous sense of climax through his favourite device of melodic sequence in the Osanna of the Sanctus.

The Matins respond for the Feast of St Nicholas, Ex eius tumba, incorporates a prosa, ‘Sospitati dedit aegros’. This is an interpolated text, consisting of eight verses which refer to several legends associated with the life of the fourth-century saint. The verses were set in pairs, so that there were four different plainsong melodies. All the verses had the same end-rhyme, the final syllable of which, ‘–o’, was taken up by the chorus in repeating the melody of each of the first seven verses, the last verse leading (both musically, and in the sense of the words) directly into the repetition of the final part of the respond. Taverner provided polyphony for all the verses, so that each of the four plainsong melodies received two different treatments, the result being a kind of variation chain. As well as varying the scoring, Taverner also varied the presentation of the plainsong itself in each verse. In the first verse, for instance, the melody appears, somewhat elaborated, in the second voice down (the mean); while in the following verse the same melody is given canonic treatment in the mean and the tenor.

So far as we know, Taverner’s is the only sixteenth-century setting of this text, and the style and texture of the music, as well as its formal complexity, place it firmly in the medieval tradition, and suggest that it may be among Taverner’s earlier works, perhaps written while he was still at Tattershall. Polyphonic and structural intricacies do not, however, diminish the inherent qualities of Taverner’s graceful melodic lines and varied sonorities.

Cover artwork: Madonna and Child with SS William of Aquitaine, Clare, Anthony of Padua and Francis by Garofalo (?1481-1559)