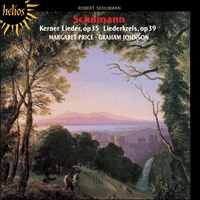 ‘An outstanding Helios CD … singing and playing of the highest order’ (Gramophone)
‘A superb Schumann disc’ (The Penguin Guide to Compact Discs)
‘Margaret Price sings consistently like an angel here, though it probably needs a human to inject such variety and ardour as we find throughout this recital … Price and Johnson are in wonderful accord, and in a year already notable for Lieder recitals this will take a high place’ (Classic CD)

For all his literary inclinations, the young Schumann showed scant interest in song-writing. As a student in Leipzig he produced a clutch of Lieder, including five to poems by Kerner. But he spent his twenties drawing rich and fanciful new sounds from the piano; and as late as June 1839 he wrote to the composer Hermann Hirschbach: ‘All my life I have regarded vocal music as inferior to instrumental and never considered it great art.’ Yet by the end of 1840 he had composed around 140 songs, plunging himself into the new genre with characteristic feverish intensity. There are several reasons behind this apparently sudden conversion. For one thing Schumann was beginning to feel frustrated writing for the piano alone, claiming it was inhibiting his creativity; then there was the influence of Schubert, whose late songs he had studied avidly when they were published in 1838/9, and of his friend Mendelssohn, who urged him to try his hand at vocal music. But the chief catalyst was Clara Wieck, to whom Schumann had become secretly engaged just before her eighteenth birthday in September 1837. On a mundane, practical level the publication of songs offered financial rewards beyond anything his piano music (described by Clara as ‘too cryptic for the public’) could provide; and Schumann, anxious to impress his credentials on Clara’s implacable father, needed all the financial security he could muster. But at a more fundamental level the wonderful effusion of song in 1840 was a response to a profound emotional and psychological need. For these songs are in essence love songs to Clara, the most rapturous and intensely felt in all music. In them he could express overtly, specifically, what was covert and implied in his piano music: his passion and longing for her, his despair at their enforced separation, his vision of sexual and spiritual fulfilment and his obsessive fear of losing her.

Schumann’s great song year began in February with the Heine Liederkreis, Op 24, and the Myrthen collection, Op 25. During April, while still awaiting the Court’s permission to marry against Wieck’s wishes, Robert and Clara were able to spend a few happy days together in Berlin; and when Robert returned to Leipzig, remembered bliss and the pain of renewed separation inspired him to his greatest achievements as a song composer: Dichterliebe and the cycle (Liederkreis) based on poems by Joseph von Eichendorff (1788–1857), which he described to Clara as ‘my most romantic music ever, containing much of you in it.’

Eichendorff’s allusive, epigrammatic verse, full of strange half-lights and vague, ecstatic yearnings, was as closely attuned to Schumann’s genius as the poetry of Heine. For the Liederkreis the composer drew on several different Eichendorff sources, including the stories Viel Lärmen um nichts (‘Much Ado about Nothing’) and Ahnung und Gegenwart (‘Future and Present’) and the novel Dichter und ihre Gesellen (‘Poets and their companions’). And though the songs do not form a cycle in the manner of Schubert’s Schöne Müllerin or Winterreise, with their clear sequence of events, they are linked by recurrent images of loss and longing, of solitude and mystery, of night and the forest, of wistful reverie and rapturous soaring. The cycle’s unity of theme and atmosphere is underlined by a carefully integrated key scheme, with the F sharp minor–A major–E major sequence of the first three songs mirrored by the E minor–A major–F sharp major of the final numbers; and by Schumann’s love of thematic cross references, usually veiled, occasionally explicit, as with the use of the same motif at the beginning of No 7 (‘Auf einer Burg’) and No 8 (‘In der Fremde’).

The ceaseless left-hand piano arpeggios in No 1, In der Fremde, were probably suggested by the harp accompaniment to which the poem is sung in Eichendorff’s Viel Lärmen um nichts. Schumann’s unified texture is wonderfully rich in detail: the keyboard accents at the beginning suggesting lightning; the chromatically descending minims in the bass at ‘Vater und Mutter sind lange tot’; the haunting piano cantabile at ‘Wie bald, ach wie bald’; and the delicate spreading of the right-hand chords to evoke the rustling forest. Intermezzo is a declaration of love to Clara, half musing, half urgent, and growing from a falling five-note figure Schumann often associated with her in his music. In the piano postlude the theme is adorned with a new counter-melody, as if to symbolize the longed-for union with the beloved.

The third song, Waldesgespräch, is the only one in the cycle to embody a dramatic narrative. Eichendorff’s version of the Lorelei myth combines three favourite themes of the German Romantics—night, the forest, and the supernatural. And Schumann’s music graphically portrays scene and character: the confident, galant young huntsman (with the suggestion of horns in the accompaniment), the insinuating, treacherous witch, heralded by a sudden, disquieting dip from E to C major, and the shock moment of recognition, conveyed with another abrupt shift of key. The hunting horns continue to sound in the postlude, with grimly ironic effect.

The next two songs are suffused with an atmosphere of stillness and secrecy. In Die Stille the shy, confiding melodic line expands and soars at ‘Ich wünscht’, ich wär ein Vöglein’ (with a fleeting echo of the hunting horns from Waldesgespräch at ‘wohl über das Meer’) before the subtly modified repetition of the opening verse. Mondnacht is perhaps the loveliest of all Schumann’s songs, with its evocative musical imagery (the sky’s mystical embrace immediately suggested by the downward curling lines of the piano prelude), its rapt, tenderly repeated vocal phrases and the exquisitely calculated dissonances of the accompaniment (Schumann magically delays the resolution on to the tonic chord until ‘die Erde’ in bar ten, the moment of union between sky and earth).

Time past is a recurring theme in the following three songs. In Schöne Fremde and Auf einer Burg images of antiquity create an atmosphere of romantic strangeness: exotic in the former, conceived in a single breathless sweep, austere and ominous in the latter, with its gloomy, incantatory vocal line, modal harmonies and solemn touches of canonic imitation. The mournful, unresolved final cadence leads directly into In der Fremde, where the singer’s anxious, broken phrases sound against the murmuring of the nocturnal forest. The tragic twist at the end is underlined by a threefold repetition of the final line and a ghostly echo of the piano’s ‘murmuring’ motif deep in the bass.

Wehmut, with its mingled yearning, rapture and melancholy, is another love-song to Clara. Unusually for Schumann, the piano right hand doubles the voice part throughout; but the keyboard texture is wonderfully rich and sonorous, deepening mysteriously at the close to enhance the ‘tiefe Leid’ of the poem. Zwielicht is the most enigmatic and disturbing of the Eichendorff poems Schumann chose to set; and the eerie, treacherous twilight finds its metaphor in this extraordinary brooding, shadowy music, oppressive with a chromaticism that threatens to dissolve familiar tonal outlines. After the terrible warning at the close, declaimed by the singer unaccompanied, the bright key of A major and lusty 68 ‘hunting’ rhythm of Im Walde provide an almost physical relief. But in the second verse the impetus slackens and the tonality shifts strangely as the joyous memory fades, leaving only the dark, sighing forest and the poet’s nameless fears. In 1840, his future with Clara still uncertain, Schumann had placed Auf einer Burg as the final song in the cycle, ending with the forlorn singer and the weeping bride. But real life provided a happier outcome; and when the Liederkreis was published in 1850, Schumann substituted the cycle’s most ecstatic outpouring, Frühlingsnacht, with its ardent, quivering piano figuration, luminous wisps of counter-melody and triumphant final ‘Sie ist dein!’

On 12 August 1840 the Court of Appeal finally pronounced its verdict: Schumann and Clara were free to marry. The wedding duly took place a month later, the day before Clara’s 21st birthday. And within a few weeks Schumann began sketching his ‘Spring’ Symphony, heralding a decisive shift from song to instrumental composition.But before the year was out he did produce two more song-cycles, the Rückert settings, Op 37, and the twelve songs to poems by Justinus Kerner, Op 35. Kerner (1786–1862) is remembered today almost exclusively through Schumann’s songs, though in his time he was a noted doctor and author of a book on parapsychology whose romantic verse, often sombre and mystical, enjoyed a certain vogue.

Schumann entitled the Kerner group ‘Liederreihe’ (‘Song Sequence’) rather than ‘Liederkreis’; and though images of wandering and of tragic loss recur through the songs, there is no attempt at the internal unity of the Eichendorff Liederkreis. In contrast, too, to the private, withdrawn atmosphere of the Liederkreis, several of the Kerner songs are in Schumann’s most vigorous, open manner: Lust der Sturmnacht, where the piano’s syncopated, minor-keyed storm music becomes major-keyed background to the blissful domestic scene; and the two quintessentially German walking-songs, Wanderlust and Wanderung, both marked by the heartily insistent dotted rhythms often favoured by Schumann. In more contemplative vein are the folk-like Erstes Grün, with its touching contrast between the voice’s bittersweet minor-keyed tune and the major-keyed piano interludes suggestive of the burgeoning spring; the twilit Sehnsucht nach der Waldgegend, rich in Brahmsian nostalgia; and Auf das Trinkglas eines verstorbenen Freundes, with its gravely ceremonial chorale melody and awesome remote modulations. There is a similar sense of ritual solemnity in Stirb, Lieb und Freud, whose accompaniment suggests a Bachian organ prelude sounding softly in the distance (and looks forward, incidentally, to the cathedral movement in the ‘Rhenish’ Symphony).

Towards the end of the collection the mood grows more inward. Stille Liebe, with its poignant chromatic harmonies and unmistakable allusion to Schubert’s Dass sie hier gewesen, is another love-song to Clara. Its key and melodic outline are echoed in the tiny Frage which ends, aptly, on an unresolved dominant chord. The following Stille Tränen looks back to the Eichendorff Mondnacht in its evocation of secret moonlit reverie, and in its exquisitely sensitive repeated-note accompaniment. Schumann may here emphasize the imagery of Kerner’s first verse at the expense of the nocturnal sorrow that lies at the heart of the poem; but the fervent, arching melodic lines, veiled harmonies and rhapsodic piano postlude of this wonderful song enshrine the essence of the composer’s luxuriant romantic yearning.

The two final numbers return to the epigrammatic simplicity of Frage. In a sense they form a single strophic song: both are set to virtually identical music, with the last song marked to be performed ‘still more softly and slowly’ as the poet withdraws ever more into himself. But whereas Wer machte dich so krank? ends with a tiny piano postlude, Alte Laute fades into silence on the singer’s final ‘nur’, leaving the song—and the whole Liederreihe—with an enigmatic, inconclusive feel.