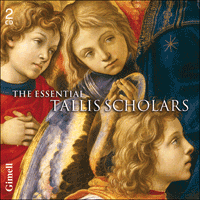 "I am delighted to recommend this selection from our recordings. It is an excellent introduction to our work and to Renaissance music in general." (Peter Phillips)

The First 30 Years
The first concert I ever directed took place on 3rd November 1973 in the Church of St. Mary Magdalen, Oxford. Since the programme on that occasion was entirely of renaissance sacred works (by Lassus, Ockeghem, Josquin and Obrecht) and since four of the ten musicians involved in the concert (Philip Cave, Julian Walker, Ashley Stafford and myself ) are still associated with the group, I think it is fair to describe this event as the starting point of The Tallis Scholars.

This first concert was typical of so many experimental undergraduate vocal ensembles before and since, which have drawn on the supply of talented young singers attached to the choral foundations: there was an indefinite number of rehearsals, though the only time all the participants were present was at the concert; and the audience was tiny. It is hard to remember quite what I thought I was doing 30 years ago. If someone had claimed then that a group which did nothing but sing Latin-texted renaissance sacred music would survive to celebrate its 30th anniversary and that this would be of anything but the most local interest, they would have been laughed at. Likewise to claim now that I had spotted a gap in the musical market and methodically went about plugging it would be to invest me with quite unjustified foresight. Indeed, one of the most interesting questions to me now is how I and some of the first singers in the group could have been so apparently disinterested in starting a proper career. I was simply doing what I enjoyed doing most—exploring renaissance sacred music, with the best singers I could find.

The fact is that there were very few prospects for unaccompanied vocal ensembles in 1973, and probably none for those which insisted on doing renaissance polyphony only. Almost all such groups were amateur. Renaissance music was not a serious option—and it never occurred to me that it might be.

But then it never occurred to me that it wasn’t either. I believed in the music of course and I passionately believed, as I still do, that the sound we were striving to produce could create the most moving interpretations of it. Since I found it so convincing—and I soon discovered that some of the singers agreed with me—I didn’t see why music lovers in general shouldn’t do so as well. So it was, strong in hope and with no experience, that we gave concerts wherever we could, often in chaotic circumstances and to small audiences. For many years I made my living from teaching which supported our concerts and recordings—doing that very un-eighties thing of waiting to see what would happen. In fact, nothing very significant did happen until we won the Gramophone Record of The Year Award in 1987.

Of course that achievement did not come out of the blue. For years we had been honing the sound which I had kept in my head from the earliest days of the group. Essentially this sound has not changed; and I came to realize that our decision not to sing any other kind of music was a rare strength. In particular, Steve Smith and I had spent countless hours editing tapes, which I believe slowly came to create in the public mind a sense of a new approach to choral sonorities and a new standard in achieving them. What was perceived to be obtainable from these recordings duly fed back into our concert giving, and indeed set a bench mark for younger singers who eventually came to sing this repertoire.

The last decade has seen great success for this music. The sound of renaissance polyphony has been heard in some very unlikely places and, since I didn’t predict it, I have found the scale of its appeal bewildering. Nothing surprises me more than to see concert halls in countries whose cultures are very different from our own packed with people to hear Latin-texted sacred polyphony. Bewildering also has been the pressure which constant touring has brought on our home lives, some of which, including my own, have buckled under the strain. To travel regularly may appear attractive but the greatest reward remains the pleasure derived from performing this music. Despite the unexpected career possibilities, this pleasure continues essentially to be just as it was 30 years ago.

The Music
The pieces on these two discs are taken from over fifteen years of recording by The Tallis Scholars, starting with the now-famous recording of Allegri’s Miserere from 1980. Over the years the group has made more than 40 discs, almost entirely in two venues—Merton College Chapel in Oxford and Salle Church in Norfolk. Both these buildings were chosen for the clarity of their acoustic.

All the music sung here benefits from clarity, both in the singing and the surrounding building, whether its sonority includes very high notes, as in some of the English repertoire, or has thick textures, as with the Flemish writing and especially Brumel’s 12-voice Gloria. The very nature of polyphony—many voices weaving round each other—requires it. However, the differences in sonority between disc 1 and disc 2 are fascinating. The English school (disc 2) built up an idiosyncratic use of voices in the early half of the sixteenth century, which included a high treble part and four independent voice ranges underneath (to be heard most spectacularly in Sheppard’s Media vita and Cornysh’s Salve regina) while all the continental writing on disc 1 kept to the more familiar present-day scoring of soprano, alto, tenor, bass (and in the Flemish school quite low soprano, as in Josquin’s Praeter rerum seriem). So the English music tends to be lighter and brighter than the more densely scored Flemish writing. Palestrina and Victoria come somewhere between the two. However, by the late-sixteenth century the two traditions had drawn much closer, as may be heard in Byrd’s Five-part Mass.

Allegri’s Miserere essentially lies outside this discussion, since it is not written in renaissance polyphony. Allegri himself lived well into the baroque era, dying in 1652, which is reflected in the chordal structure of the music. The famous embellishments, the subject of so much speculation and excitement ever since Mozart transcribed them from memory at the age of 14, are even less of this period, having been improvised on the spot until towards the end of the last century, when the tradition of doing this gradually died out. The version sung here was first put together in the early-twentieth century—and has become for several generations of listeners the Allegri Miserere.

Apart from the Allegri the only other pieces on disc 1 which are not Flemish are Victoria’s 8-part Ave Maria and Palestrina’s Sicut lilium, both pieces contemplative in mood, the first making direct reference to the Virgin Mary, the second probably indirect reference to her through the rhapsodic poetry of the Song of Songs. Otherwise the disc maintains the consistent, intense sonority of Flemish polyphony—highly complex in the case of the 8-voice Pater peccavi of Crecquillon, 7-voice Descendi of de Rore and 12-voice Gloria of Brumel, beguilingly transparent in Isaac’s 4-voice Tota pulchra es. The three Lassus items convey a more modern, almost baroque idiom, two of them (Alma redemptoris and Salve regina) predicting the Venetian antiphonal style of Gabrieli and Monteverdi.

Disc 2 falls into two parts. The pieces by Sheppard, Tallis, White and Cornysh come from the first half of the sixteenth century or, in the case of the Tallis motets, recall the pre-Reformation idiom. Here the music is made up of relatively long lines, more notes than syllables, with the emphasis on the part-writing and not on the harmonic background. Media vita is probably the most substantial piece written in a single movement to come out of the English school, arguably Sheppard’s masterpiece, scored for high treble, mean, two countertenors, tenor and bass. If this is virtuosic so in a slightly different way is Cornysh’s Salve regina, which ends with some of the most testing embellishments a singer could hope to meet, even in operatic composition. By contrast his son’s Ah, Robin gives an example of the beautiful music set to English words at the court of Henry VIII.

The second part of disc 2 is Byrd’s Five-part Mass, which was written in the 1590s. It is one of three settings of the mass which Byrd wrote for a recusant Catholic community, being obliged to publish it without a title-page in order to avoid prosecution. The style of Byrd’s music has drawn closer to the Flemish idiom—imitative between the voice-parts, largely syllabic in setting with the occasional examples of word-painting (as at “Et ascendit” in the Credo), and the ranges of the parts closer together than in Sheppard and his contemporaries. But the mood has a different intensity from the writing on disc 1—darker and more questioning, reflecting the uncertain state of the Catholic church in England. Never was polyphony put to more passionate expression than in Byrd’s masses, of which the five-part is the crowning achievement.