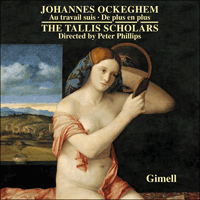 Specially recorded by The Tallis Scholars to celebrate the music of Johannes Ockeghem in the year of his 500th Anniversary. Ockeghem died on 6 February 1497.

‘The great strength of The Tallis Scholars' Ockeghem disc is in Peter Phillips's choice of two contrasting Masses … Phillips's approach to the work (as he himself describes it) is more like 'chamber music, gentle and undemonstrative'. Yet the sense of excitement here is none the less palpable in the judicious use of solo voices: listen to the kaleidoscopic changes in the Credo, and exhilarating final melismas. The singers' individual contributions are the touchstone of this splendid reading of Au travail suis, those who want to savour Ockeghem at his boldest really ought to start here. The Tallis's frequently astonishing technical resources have rarely if ever been used to better purpose’ (Gramophone)

The 500th anniversary of Ockeghem’s death, which occurred on 6 February 1997, provided one of the most effective opportunities in many years to rehabilitate a major figure from the Renaissance period. In the words of one recent biographer (Fabrice Fitch in the Musical Times, September 1995, p.456) Ockeghem was ‘the most original musical mind of the 15th century’, an originality which shows in all the forms which he cultivated – Masses, motets and chansons. To give an impression of his achievement we present two of his less well-known Masses – settings in markedly contrasted styles; and the chansons on which they were based, one probably by Ockeghem himself. Here, then, are three angles on his many-sided genius.

Ockeghem’s biographical details are scanty. There has been considerable debate over where and when he was born. The New Grove Dictionary of Music and Musicians (1980), following a long-held belief that he died at a very old age, tentatively suggested 1410; but recent scholarship has found evidence that it was probably some time after 1420 in the French-speaking part of modern Belgium, probably Saint-Ghislain near Mons. In 1451 he arrived at the court of the French king Charles VII and served him, his son, and grandson until his death forty-six years later. Perhaps because his life at court was uneventful there is very little reference to Ockeghem in contemporary documents, though one significant detail is that in 1459 Charles VII appointed him Treasurer of the Abbey of St Martin in Tours, where the king himself was titular abbot. This title brought with it personal responsibility for the administration of the largest abbey in France and considerable financial reward. It also suggests that, early on in his time at court, Ockeghem was highly regarded as much as a politician as a musician. That he was also, when needed, a diplomat is hinted at by the circumstances of his only documented journeys – one to Spain and one to Flanders – which may well have been on royal business. One contemporary description of him is as a ‘counsellor’.

His compositional output, so far as is known, was relatively small – fewer than two dozen songs, perhaps nine motets and thirteen undisputed Mass-settings. It has been argued, therefore, that composition was only an occasional activity for Ockeghem, ‘only one of many activities pursued in parallel, perhaps even a recreation from the rigours of court life’. This would also help to explain why so many of his compositions either seem to confront specific compositional problems, which are sometimes resolved in the most elaborate way, or to explore quite sharply defined stylistic issues. The much-admired Missae Prolationum and Cuiusvis toni obviously come into the former category; De plus en plus and Au travail suis, similar in their starting-points but so different in the working-out, come into the latter one.

The similarity is that they are both based on the tenor parts – only – of a chanson (that is, the middle voice part of three). They make a convenient comparison partly because these are the two leading examples of Ockeghem using a secular tenor melody as his model or cantus firmus (it has also recently been argued that the Missa Mi-mi is based on the chanson Presque transi); and partly because the paraphrase is effected in these Masses in two quite different ways. The Missa De plus en plus shows the historically more advanced method of stating its model in long notes, like a chant cantus firmus, in the third part down of the four. The statements are heavily embellished and not infrequently extended towards the cadences, but the entire melody is eventually given once in each movement after which (with the exception of the Sanctus) the first phrase is detached and repeated to form a coda. This cantus firmus part sings little other than the chanson melody, which means it never joins in the duets and trios which are always free compositions. The chanson references in the Missa Au travail suis, equally in the third part down of the four, are much less frequent though, in one sense, this setting is more obviously held together by the chanson element: the opening notes of the chanson tenor are used to form a very audible and effective head-motif at the beginning of each movement. After that – no more than the first ten notes – references to any part of the chanson are hard to pin down and very much in passing.

The essence of Missa De plus en plus lies in the contrast between the full and reduced-voice sections, the former carrying the chanson melody, the latter being free compositions. The full passages can be quite lengthy and substantial blocks of sound (for example, the whole of the Kyrie and most of the Agnus Dei); the reduced-voice ones can be highly virtuosic, almost bewilderingly so since they often come without warning (to emphasize the distinction the reduced-voice lines are sung by solo voices on this recording). The formality of this arrangement contrasts markedly with the method of Au travail suis, where inclusion of the chanson melody is not an issue after the first few bars of each movement. Here full sections may last just a handful of notes, surrounded by different pairs of voices singing briefly together and then forming trios. Some of the writing, almost all of which is free composition, is conceived in simple chords which set the text syllabically. The impression of De plus en plus, therefore, is of a grand setting, designed to impress both in its formal planning and in its difficulty of execution; Au travail suis, by contrast, has the manner of chamber-music, gentle and undemonstrative, expressive in its very stillness, as the Agnus Dei II so memorably shows. Both settings constantly point to Ockeghem’s genius for writing melodies, sometimes concise, sometimes complicated in their rhythm, sometimes almost oriental in their incorporeal twisting and turning. The two Masses are contrasted in their scorings as well: De plus en plus is for the fairly standard Alto, High Tenor, Low Tenor, Bass (four distinct ranges); Au travail suis is for the most unusual Soprano, Alto and two Basses (three distinct ranges).

The ability to write straightforwardly expressive melodies is nowhere more clearly evident than in the chanson Au travail suis, composed either by Ockeghem or by his Franco-Flemish contemporary Barbingant. Although it begins with a rare instance of imitation in this genre (which is carried into the head-motif of the Mass to beautiful effect), the seductiveness of the music lies in the way the lines seem to come and go without specific reference to each other, untrammelled. In Binchois’s De plus en plus the interest is more exclusively in the top part, for all that it is the tenor which is used in paraphrase in the Mass. Here the conception is of a free-flowing tune with accompaniment, the lower parts being left untexted. Both the chansons follow the long-established form of the rondeau, one of the standard late-medieval formes fixes: AB A A AB AB. Neither the adherence to an old-fashioned form nor, for that matter, to the intricacies of meaning in its courtly song texts, seems to have had any repercussions for the Masses which are based on these chansons.

Ockeghem’s music has long posed a problem of identification. Each of his few compositions seems to be different from the next, and each to carry its own puzzle. As Manfred Bukofzer pointed out nearly fifty years ago, his compositional style has often had to be described in negatives: non-imitative, non-sequential, assymetrical, irrational. It is to be hoped that the Ockeghem anniversary and the new opportunities for hearing his music it promoted – this recording among them – will help to find the pattern and rationale; and show why Ockeghem was the most highly regarded composer of his time.