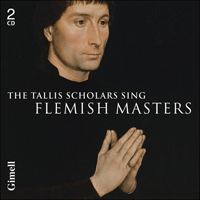 "The Flemish masters have been at the heart of our work from the beginning, just as they were at the heart of the whole Renaissance musical scene—and their Masses were the showcase in which they displayed their most sophisticated achievements. This specially priced selection of previously released recordings features five of the greatest, from five of the greatest masters." (Peter Phillips)

‘As ever Peter Phillips directs these performances with clarity, precision and a feel for a nicely modulated line. A great deal of scholarship has gone into producing the music on the disc, but when you listen you forget scholarship and simply lie back and enjoy some fabulous music, beautifully and intelligently sung’ (MusicWeb International)» More
‘This is a little-known landmark of the music of the sixteenth century, and it's not an easy piece for any choir. If you can sample, dip into the 14-minute Sanctus and Benedictus, and hear how the Tallis Scholars' focus holds up the piece's almost symphonic architecture. This release will help fill out any shelf of Renaissance choral music with pieces that should really be there’ (AllMusic, USA)» More

Just as the Flemish school of composers was central to every aspect of Renaissance music, so these composers have been central to the work of The Tallis Scholars. At regular intervals we have dedicated whole albums – as well as whole concerts – to their compositions, and particularly to their Mass-settings. Here one finds the essence of their art, the showcase in which they displayed their most sophisticated techniques.

This selection contains five of the greatest examples of Flemish Mass-composition. They were written in the hundred years between about 1475 (the Ockeghem) and 1575 (the Lassus), in which time the scope of such music had expanded enormously. The time-line is instructive. The earliest – the Ockeghem – is for four voices. Next came the Isaac, for six voices, followed by the Rore, for seven, and the Brumel, for twelve. The sequence is rounded off by the Lassus for eight voices, disposed in the late-Renaissance manner of double choir. Interestingly the greatest of all the Flemish writers – Josquin des Prez (whose Masses we have recorded elsewhere, intending eventually to record them all) – kept to four voices in all his Mass-settings. For him the Mass was a vehicle for the most subtle chamber music; for the composers represented here it was more an opportunity for grandeur, which meant increasingly polychoral sonorities.

Other techniques link these settings, proving that they were the products of a school of training which passed its techniques from one generation to the next. For example they are all based on pre-existing material: three on polyphonic models (all of Flemish provenance) and two on chant. This means that each composer had to find a way of quoting his model while surrounding it with his own inventions. Typically for Flemish writers these inventions tended to be motivic and imitative, the melodic lines pieced together like a jigsaw puzzle of interlocking fragments. This could lead to extreme contrapuntal ingenuity – much beloved of the Flemish more generally – in such devices as canon. Only by the time of Lassus did these national techniques begin to become genuinely international and proto-Baroque, harmony taking over from the more linear thought of the earlier writers.

The Missa De Apostolis of Heinrich Isaac (c.1450–1517) is unusual in being an alternatim setting. This means that by constantly alternating between chant and polyphony many of the polyphonic sections are contained within a single phrase. Isaac met the challenge of brevity by intensifying his part-writing and using sonority to spectacular effect: a six-voice texture was a rarity around 1500, and only the English at that period could dream up quite such thickly dissonant cadential formulas. This Mass was based on a selection of Gregorian chants taken from the repertoire of the Feast of the Apostles, and must have been written for court use in Vienna, where Isaac was employed and where it was customary not to include the Credo as part of the Ordinary.

By contrast the Missa Au travail suis by Johannes Ockeghem (c.1425–1497) was based on a secular model – a chanson either by Ockeghem himself or the unknown ‘Barbingant’. In fact Ockeghem only quoted the tenor from this three-part model (at that time the tenor was often held to be the ‘tune’), doing so infrequently but obviously: the first ten notes of it may be clearly heard at the beginning of each movement as a head-motif. After that references are hard to identify and the music settles into a pattern of gentle, undemonstrative chamber-music, the second Agnus Dei summing up the stillness of Ockeghem’s conception. The reason why this music sounds earlier than anything else on these discs is that it lacks High Renaissance sonority. As was customary in the fifteenth century, Ockeghem kept his four voices within a narrow compass (except in the extreme case of the second Agnus) and regularly scored down to duets and trios.

From the other end of the historical spectrum comes the Missa Osculetur me of Orlandus Lassus (1532–1594). Here everything is sonority: brilliant sounds created by using eight voices in the ‘Venetian’ double-choir arrangement, replete with high soprano parts and wide overall tessituras. In this, as in much else, he had effectively ceased to be a Flemish composer, his long years in Italy having taught him a more avant-garde style.

In fact Lassus’s three double-choir Masses – the other two are the Missa Vinum bonum and the Missa Bell’ Amfitrit’ altera – represented an important step in the general advance towards Baroque music. Andrea Gabrieli visited Lassus in Munich in the 1560s after Lassus himself had made repeated visits to Venice. Clearly he was influential in the development of the new idiom, and there is a certain irony in the fact that it was a Flemish composer, whose training was in techniques antipathetic to everything Baroque, who led the way. Nonetheless one admires how he instinctively avoided the tedium which later would beset so much polychoral writing and its too-obvious effects. Here his alternating phrases are quite long, so that simple imitation between the parts is possible; and he was careful to make a strong difference in sonority between passages for one choir and those for both choirs together. The result is an early, but genuinely virtuosic, exercise in an idiom which would last for at least another two hundred years.

The Missa Praeter rerum seriem by Cipriano de Rore (c.1515–1565) was probably written only a decade or two before the Lassus – Rore was an older contemporary of Lassus but died considerably younger; and if the exact date of the Lassus is not known, the Rore must come from the period (1547–58) when he was employed by Duke Ercole II d’Este of Ferrara, whose name he invokes throughout the composition. Yet despite this temporal proximity to Lassus, and the fact that Rore spent an unhappy year (1563) as maestro di cappella at St Mark’s in Venice, this Mass is a trenchant example of Flemish writing. It is based on one of Josquin’s greatest motets, already in six voices, to which Rore had the skill to add an extra soprano part. He then turned the first alto part into a long-note cantus firmus, perpetually quoting the words ‘Hercules secundus dux Ferrarie quartus vivit et vivet’ to the devotional song melody used by Josquin. Much of the power of this wonderful music derives from the Josquin motet, but close inspection shows how resourceful Rore was in his use of it. New counterpoints abound, and the extra soprano part adds a brilliance to the sound which is patently of the High Renaissance.

Much of what I have talked about here is summed up in the astonishing Missa Et ecce terrae motus by Antoine Brumel (c.1460–c.1520). Clearly this is a composition of an earlier period than the Rore and Lassus, yet it is the most sonorous of all. Since twelve-part writing was extremely rare in the period before 1520 Brumel was effectively making up the idiom as he went along. That he was successful is shown by how famous both he and this music became in the sixteenth century: the only surviving source was copied in Munich under the direct supervision of Lassus, who himself sang tenor II in an early performance; and only Josquin received more laments from his fellow composers on his death.

This idiom is quintessentially Flemish, blown up to vast proportions. Many of the twelve-voice sections are underpinned by a canon, quoted in long notes between the first bass and the first two tenor parts, using the first seven notes of the Easter plainsong antiphon at Lauds, Et ecce terrae motus. The purpose of this scaffolding was to give Brumel huge harmonic pillars, which move slowly. At first hearing this measured harmonic turn-over may seem disappointing, but soon the logic of it becomes apparent: Brumel needed to move slowly in order to work out all the motifs he has invented. In doing so he effectively abandoned polyphony in the sense of independent yet interrelated melodic lines, and resorted to sequences and figurations of the kind Josquin was exploring with no more than four voices.

Yet despite its fame, Brumel’s masterpiece remained an isolated achievement, an unforgettable one-off. It is a tribute to his genius, and the vibrancy of the Flemish cultural scene, that such a glorious experiment could ever have been commissioned, written and performed.