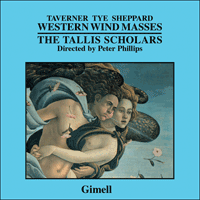 The Western Wynde Masses of Taverner, Tye and Sheppard make a unique set. Not only was there no other example in English Renaissance music of a linked series of Mass compositions by different composers, there was also no precedent in English composition for a Mass based on a secular tune.

The Taverner and Tye Masses are also available on the specially priced double album The Tallis Scholars sing Tudor Church Music – 1. The Sheppard setting is included on Volume 2 of the same series.

The Western Wind Masses of Taverner, Tye and Sheppard make a unique set. Not only was there no other example in English Renaissance music of a linked series of Mass compositions by different composers, there was also no precedent in English composition for a Mass based on a secular tune. If Taverner’s was the first of this set to be written, it was breaking important new ground, probably deliberately emulating the justly famed Continental Mass-settings on such popular songs as L’homme armé and Mille regretz. Tye and Sheppard then took up the challenge of turning Taverner’s initiative into a Continental-style series. From the listener’s point of view the linking is both obvious and satisfying since the three settings use the same unusual four-part scoring of treble, mean, tenor and bass; and the Western Wind melody, beautifully tuneful in itself, is almost always audible within the polyphony.

There is no independent source for the tune which these three composers set, though the love lyric ‘Westron wynde when wyll thow blow?’ was possibly a popular one at the court of Henry VIII. One setting of these words does survive in a Henrician manuscript (BL MS Royal App. 58) but its melody is at best only vaguely related to the one found in the Masses, since they do not go together fluently in counterpoint, and they are too dissimilar for one to be a reworking of the other. Although scholars have for decades assumed that the two must be connected because of the coincidence of their titles it is more logical to suggest that the melody of the Masses was a separate courtly song, a deliberate composition, sophisticated and well-balanced, in its own right. It is just possible that Taverner himself wrote it, since a number of secular songs by him date from his early years at Henry VIII’s court. As there is no source, the underlay of the words is conjectural.

It has long been assumed that Taverner’s setting came first and that the ones by Tye and Sheppard were written to complement it. There are a number of good reasons for believing this, though none puts the matter beyond all doubt: Taverner was the senior figure both in reputation and age (and sufficiently admired for several of his other works also to be taken as models, most famously the ‘In nomine’ section of his Missa Gloria Tibi Trinitas); the Taverner setting was placed first in the main source (the ‘Gyffard’ part-books), followed by the Tye and Sheppard in that order; Taverner at some point gave the Western Wind melody to every voice but the mean, while Tye gave it only to the mean, suggesting that he was deliberately completing a scheme; Taverner was the most likely figure of the three to experiment with secular melody – neither of the others seems to have written any secular songs – and indeed the most likely to do something as untraditional as use one in a sacred context.

In fact the three settings are stylistically quite distinct, so that it was only an idea which Taverner bequeathed the others, not a method. Taverner himself used the melody thirty-six times in all, without any free passages in between the quotations, citing it nine times in each of the four movements. Twenty-one of these statements are in the top part (where they are at their most audible), ten in the tenor and five in the bass (where they can most easily be overlooked: perhaps the most evident example is at the beginning of the Agnus Dei). The melody is occasionally ornamented in the cadence, but is varied only to the extent that in one statement in each movement the third and last phrase is dropped. In general Taverner’s method is to treat the tune as the scaffolding for a set of variations rather than to use it as a cantus firmus in the traditional way.

Of the three settings Taverner’s is both the most varied and the most sectional. Only very rarely, as in the third Agnus, did he run through two consecutive statements of the melody without changing the number of voice-parts; almost invariably each statement defines a scoring and a type of figuration. It is for this reason that tribute is so often paid to his resourcefulness in inventing these figurations and their counterpoints – he came up with well over thirty of them, and they each add something to one’s appreciation of the melody itself.

Tye’s version is more through-composed than either of the others, as may be heard at the outset where three statements of the melody run almost continuously into each other. This process is encouraged, of course, by Tye keeping the tune, quoted twenty-nine times, in just one of the four voices, the mean. If this insistence on the mean was a deliberate attempt to ‘answer’ the Taverner, Tye made at least one other direct reference to Taverner’s work: at the beginning of the Sanctus he has six statements of a descending scale in the bass, where Taverner had five ascending ones of exactly the same compass in the same voice. A rather striking difference between the two treatments, however, is Tye’s addition of an extra beat between the second and third phrases of the melody, which neatly disturbs its otherwise regular duple time. Sheppard made this addition as well, though not so consistently.

Although Tye’s Mass undoubtedly lacks the sheer variety of detail which Taverner conceived, it does contain perhaps the most virtuosic passage of all, at ‘Benedictus’. In addition it includes some of the most unexpected, even bizarre, harmonic turns to be found in any music of the period, presumably in the interests of finding new harmonies to the same melody note. These tend to occur at cadences, for instance at the end of the ‘Benedictus’. Yet in the end it is the seamlessness of Tye’s treatment of the melody, and the beautiful harmonies along with the part-writing which he deployed around it, which make it such a satisfying work.

Sheppard’s Western Wind Mass is the shortest of the three, in number of bars nearly half the length of the Taverner, involving twenty-four repetitions of the melody which are to be found in every part except the mean. The majority of these are not complete since Sheppard regularly omitted the third phrase of the tune (partly a repeat of the second). He also made the most substantial cuts of the three from the text of the Mass. But the most significant reason for the brevity of the Sheppard is its musical language, which shows every sign of having been fashioned some time after that of Taverner and Tye. Although there are passages which pay homage to the melismatic, rhythmically complex style of the early sixteenth century, a good deal of this setting is more or less syllabic, possibly influenced, consciously or unconsciously, by the new Protestant ideals of textual clarity.

This relative simplicity has led many commentators into concluding that Sheppard’s Western Wind Mass must have been a student exercise: in fact he knew very well what he was doing. It seems likely that the work was intended for liturgical use, which, by Queen Mary’s reign when it was probably written, meant that it could not be too protracted, yet this brevity contributes to the powerful sense of direction which each movement has. The Gloria and Credo have a verve which shows off the normally almost nostalgic-sounding Western Wind melody in a rather different light from anywhere else in the set. And in the Sanctus and Agnus, where the shorter texts allowed Sheppard to adopt a more melismatic style, there are some remarkable passages of abstract composition: the Sanctus opens with a thorough and noticeably dissonant working of a five-note motif, which gradually moves from the bass into the tenor and mean; the third Agnus produces the only example in all these pieces of an extension of the melody by dividing its phrases up and repeating them, like an echo, between the contributing voices.

Of the three settings it is Taverner’s Western Wind Mass which has in recent years received the most attention. However, as long ago as 1913, H B Collins described the Tye as ‘perhaps the finest of the three’ (Proceedings of the Musical Association XXXIX, p.59). After listening to this recording one may decide for oneself.