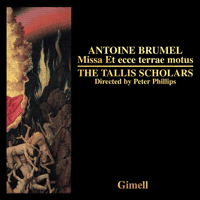 There is nothing comparable to Brumel's Earthquake Mass in the Renaissance period and this recording featuring 24 carefully selected voices from the UK and beyond caused quite a stir when it was first released.

‘The Tallis Scholars bring to this performance of Brumel's 'Earthquake' Mass … their faultless sixteenth-century technique and their wide experience of renaissance music. In addition, the clean acoustics of the parish church of Salle in Norfolk provide them with ideal sound conditions for tackling music of such complexity. Indeed, the lines are easily distinguished and the overall effect is one of controlled precision and perfection … the inclusion by Phillips of Brumel's two wonderful deep-toned Good Friday Lamentations is greatly to be welcomed and the composer's solemn Mode II Magnificat setting was a brilliant choice with which to round off this fine recording’ (Gramophone)

It is hard to think of any other piece of music quite like the twelve-part ‘Earthquake’ Mass by Antoine Brumel (c.1460–c.1520). Both in its employment of twelve voices for almost its entire length and in its musical effects, there is nothing comparable to it in the renaissance period, even if some of those effects may remind the listener of the forty-part motet Spem in alium by Thomas Tallis (c.1505–1585). Brumel’s masterpiece did not inaugurate a fashion for massive compositions; but it did quickly establish a formidable reputation for itself, admired throughout central Europe in the sixteenth century as an experiment which could not easily be repeated. It is tribute enough that the only surviving source was copied in Munich under the direct supervision of the late renaissance composer Orlandus Lassus (1532–1594), who nonetheless never tried to rival its idiom in his own work.

A pupil of Josquin des Prés (c.1440–1521) and one of the leading Franco-Flemish composers around 1500, Brumel was famous throughout the sixteenth century. In a period which has left a large number of laments in memory of its great composers, Brumel received an exceptional number, more than Obrecht (c.1450–1505), Mouton (c.1459–1522) and Agricola (?1446–1506) put together. Thomas Morley (in A Plain and Easy Introduction to Practical Music, 1597) was probably the last writer to praise Brumel for his skill, the only master he ranked alongside Josquin, making particular reference to his ability in the art of canonic composition. Brumel is important to modern commentators because he was one of the few leading members of the Franco-Flemish school to be genuinely French, which is to say that he was born outside the boundaries of the Burgundian Empire, somewhere near Chartres. He was initially employed in France proper at the Cathedrals of Chartres and Laon and (in 1498) at Notre Dame in Paris where he was responsible for the education of the choirboys. However, he seems to have had a restless temperament, which led to his dismissal on at least two occasions, and he soon began the peripatetic life of so many musicians of the renaissance period. There is evidence that he was employed in Geneva, Chambéry and probably Rome; but the high-point of his career was the fifteen years he spent as successor to Josquin and Obrecht at the court of Ferrara (between 1505 and 1520) in the retinue of Alfonso d’Este I.

Brumel’s reputation as a writer of canons would not have been greatly increased by the simple example which underlies the Missa Et ecce terrae motus, for all that the presence of the canon plays an important role in understanding the unusual musical style of the whole. Brumel restricted his quotation of the Easter plainsong antiphon at Lauds, Et ecce terrae motus, to its first seven notes (which set the seven syllables of its title to D-D-B-D-E-D-D), working them in three-part canon between the third bass and the first two tenor parts during some of the Mass’s twelve-part passages. These statements occur in very long notes compared with the surrounding activity and their details may vary slightly from quotation to quotation (for example, which of the three voices begins and what the interval between them may be). By and large, though, the realization of this canonic scaffolding is not rigorous and many of the sections of the mass are free of canon altogether.

However, the influence of these slow-moving notes can be heard throughout the work, whether they are actually there or not, in the solid, slow-changing underlying chords. A casual listener to the Missa Et ecce terrae motus, confused at first by the teeming detail of the rhythmic patterns, may hear only some rather disappointing harmonies. Closer listening will reveal why Brumel chose to write in so many parts: he needed them to decorate his colossal harmonic pillars. In doing so he effectively abandoned polyphony in the sense of independent yet interrelated melodic lines, and resorted to sequences and figurations which were atypical of his time. The effect can even be akin to that of Islamic art: static, non-representational, tirelessly inventive in its use of abstract designs, which are intensified by their repetitive application. This style of writing is so effective that anyone who might be reminded of Tallis’s Spem in alium would be unable to conceive of the need for another twenty-eight parts.

The manuscript source for Brumel’s ‘Earthquake’ Mass (Munich Bayerische Staatsbibliothek Mus.MS1) was copied for a performance in about 1570 at the Bavarian court. The names of the thirty-three court singers are given against the nine lower parts (the boys are not named), amongst whom Lassus sang Tenor II. Unfortunately the last folios, which contain the Agnus Dei, have rotted, leaving holes in the voice-parts. Any editor of the piece is presented with the unusual task of trying to guess where the notes which he can read might fit, as they are placed on the page in individual parts rather than in score; then re-compose what is missing. This was done for Gimell by Francis Knights. A further Agnus Dei, on the Et ecce terrae motus chant and attributed to Brumel, survives in Copenhagen; but it is widely thought not to belong to the twelve-part Mass, since it is for six voices, which use different vocal ranges from those in the twelve-part setting. In addition its musical style differs in various important respects from that of the larger work, not least in quoting many more than the first seven notes of the chant. For these reasons it has been omitted from this recording. The Mass is scored for three sopranos, one true alto, five wide-ranging tenors and three basses. The tessitura of all these parts (except perhaps that of the sopranos) is unpredictable to the point of eccentricity. Countertenor II, for example, has a range of two octaves and a tone, the widest vocal range I have ever met in renaissance music.

Such eccentricity is not found in the two remaining items on this recording, both scored for four voices. Brumel’s only surviving set of Lamentations, one of the most beautiful in the repertory, is also one of the most sombre, building up a rare mood of desolation by low scoring and slow harmonic movement. As was customary, the Hebrew letters (in this case Heth and Caph) are set separately from the main body of the text; less usual was the conception of the last section in triple time, though this suits rather well the accents in the word ‘Ierusalem’. Like most of the music on this recording, though unusually for a Franco-Flemish composer of the period, there is little true counterpoint in the writing and no imitation. The intense, essentially chordal style rather reminds one of the music of the Spanish composer Tomás Luis de Victoria (1548–1611) of nearly a hundred years later. In this respect, as in the sequences to be found in the Mass and Magnificat, Brumel seems to have been in advance of his time.

Brumel’s Second Tone Magnificat is a through-composed setting, where most would have alternated chant and polyphony. Its compositional style is surprisingly close to that of the twelve-part Mass, except that the chant is stated mainly in the top part in embellished form. Brumel here again relied on rhythmical sequences, at times almost baroque in their vitality, which give an interesting perspective, in four parts, to the astonishing twelve-part music of the Mass.