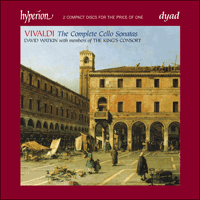 ‘Ranks honourably among the best available … Watkin has the advantage of outstanding continuo support and a recording of surpassing beauty and unexaggerated perspectives. If faced with a choice I'd opt for David Watkin's consistently articulate playing, the decisive criterion being Hyperion's rapturously seductive sound’ (BBC Music Magazine Top 1000 CDs Guide)

When Vivaldi died in Vienna on 27 or 28 July 1741, his family had the task of disposing of the vast collection of manuscripts (mainly of his own works but also containing sacred music by other composers) he had left behind in Venice. By 1745 at the latest these manuscripts, bound into the twenty-seven volumes today belonging to the Foà and Giordano collections in the Biblioteca Nazionale of Turin, were in the ownership of a noble Venetian bibliophile, Jacopo Soranzo. Oddly, these volumes contain few sonatas of any description and none at all for one instrument and bass. Vivaldi must have retained autograph manuscripts of these works in order to produce neat copies in response to commissions, and one can only speculate about the reason for their absence. Perhaps they were sold off separately and subsequently perished. At any rate, their loss means that it is impossible to gauge with any accuracy how many cello sonatas Vivaldi produced during his long career as a composer, which began no later than 1705 (the date of his Op 1) and continued up to his death.

It is certain that Vivaldi was familiar with the technique and idiomatic qualities of the cello. In his day it was normal for players to have a working knowledge of all the instruments in the ‘family’ to which the one in which they specialized belonged. Moreover, Vivaldi was for several years the only teacher of stringed instruments at the Pietà, the famous Venetian institution for foundlings, and it is hardly conceivable that he gave lessons only on his own instrument, the violin. In fact, documents establish that he also had to provide tuition on the viola inglese, a rare instrument with sympathetic strings, for which he earned a special supplement to his pay. As a matter of course he supplied concertos, and perhaps also sonatas, to the highly skilled cellists in the Pietà’s all-female orchestra. Once Vivaldi became established as a composer, commissions for cello sonatas from other players or their patrons began to arrive. Whereas he had two sets of violin sonatas (Opp 2 and 5) published, he never did the same for his cello sonatas. Presumably, the market for cello music was too small and too specialized at this time.

Three manuscript collections of Vivaldi’s cello sonatas survive. The most significant, containing six works grouped as a regular set, is owned by the Bibliothèque Nationale in Paris. It was most probably this very manuscript which served as the exemplar for an edition of the same works brought out (almost certainly without the composer’s involvement) by the Parisian publisher Charles-Nicolas Le Clerc towards 1740. In the late 1730s an extraordinary vogue for the cello emerged in Paris (Le Clerc issued at least twenty-six volumes of cello sonatas between about 1738 and 1750), giving rise to Hubert Le Blanc’s bitter polemic Défense de la basse de viole contre les entreprises du violon et les prétensions du violoncel (1740). In the Ryom catalogue the six ‘Paris’ works are numbered RV47, 41, 43, 45, 40 and 46 respectively. The preparation of the manuscript (for a customer whose identity remains unknown) must have antedated the works’ publication by several years; paleographical evidence suggests that the works were copied during the 1720s.

Manuscripts of three sonatas (RV39, 44 and 47) are preserved in the library of the Naples Conservatoire. Once again, there are no clues to a patron, but the fact that RV47 also exists in the Paris collection (as Sonata I) suggests a similar date.

Two sonatas, RV42 and RV46, are found in the library of the Counts of Schönborn-Wiesentheid at Wiesentheid Castle in Unterfranken, Germany. They were collected, and perhaps commissioned, by Count Rudolf Franz Erweln von Schönborn (1677–1754), an enthusiastic amateur cellist who also obtained several cello concertos by Vivaldi. RV46 is, of course, identical to Sonata VI in the Paris collection.

It remains merely to cite a further sonata, RV38, of which the Leipzig publishing firm Breitkopf once held a manuscript copy (the work is advertised in a catalogue of 1766) but which does not survive today.

The coevality of the nine extant sonatas explains the uniformity of their structure. In terms of form, the parallels with Vivaldi’s twelve ‘Manchester’ violin sonatas of the mid-1720s are numerous. Without exception, the cello sonatas are laid out in four movements conforming to the plan slow–fast–slow–fast. Each movement is in binary form, with two repeated sections. The third movements frequently move to a different key for contrast. Many movements have a distinctly dance-like character: in the Wiesentheid sonatas (but not the concordance of RV46 in Paris) all appropriate movements bear actual dance titles. It must be admitted, however, that—just as in the ‘Manchester’ sonatas—the rhythmic character of these movements is too varied and individual for the titles to sit comfortably on them. One can most suitably regard the sonatas as ‘composite’ in type, belonging fully neither to da chiesa (church) nor to da camera (chamber) models.

Vivaldi recognized very well the main peculiarity of the cello as a solo instrument. It is neither wholly a ‘tenor’ instrument (a ‘violin’ playing down an octave, as it were) nor a ‘bass’ instrument doubling or ornamenting the bass line, but can switch at will between these two functions, even within the same phrase. This duality of role offers great scope for ‘interior dialogues’ within the cello part itself and lends it great mobility between different registers. But beyond these important technical considerations, writing for the cello seems to have drawn from Vivaldi a special empathy: there is a degree of seriousness and expressive depth which is encountered much less consistently in his violin music. Perhaps it has something to do with the cello’s low register, since similar qualities inform his writing for bassoon.

The instrumentation of the accompaniment to the solo cello in these sonatas (and others like them) has drawn from editors and musicians many different proposals and solutions. The sources give no direct help: the accompanying bass line is either bereft of all description or is unhelpfully titled simply ‘basso’. The solution most commonly adopted today goes back to C P E Bach’s general recommendation (1753) to use a harpsichord and a cello for continuo parts. But Bach was only one voice among many and was recommending his favoured practice rather than describing general usage (let alone usage in Italy some thirty years earlier). True, the use of both a bowed instrument and a keyboard instrument aids good balance between the obbligato (notated) parts and ensures harmonic fullness, but it can be very limiting if it excludes other possibilities. In the present recording several different combinations are employed. They include the use of chamber organ in addition to harpsichord (reflecting the popularity of organetti in Italy at the time) as well as the theorbo, archlute and baroque guitar. The presence of plucked instruments, rarely employed in previous recordings, is especially significant; it is only in recent times that we have become aware of how durable their popularity (and widespread their employment) was in late-baroque music. In Vivaldi’s oratorio Juditha triumphans, performed at the Pietà in 1716, no fewer than four theorbos were at hand to play obbligato parts in one of the arias, and we even find an obbligato part for archlute in a Miserere composed for the Pietà by its maestro di coro Gaetano Latilla as late as about 1760.