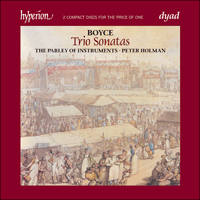 The music of William Boyce has always retained a special place in the English repertory, it being written of him that, 'there is an original and sterling merit in his productions, founded as much on the study of our own old masters, as on the best models of other countries' (Burney).

This recording is of the Twelve Sonatas for Two Violins with a Bass for the Violoncello or Harpsicord, published in 1747, and three unpublished Trio Sonatas newly edited from a manuscript in the Fitzwilliam Museum, Cambridge. These particularly attractive works boast a wide range of stylistic features and forms and for many years held centre-stage in England as masterpieces in the genre. The performances are divided between a solo quartet and the full Parley of Instruments, so ensuring over two hours of varied and inspiring listening.

‘Yet another treasurable document of England's musical heritage’ (Gramophone)
‘The works, large and small, have an air of sweet reasonableness. The fugues are warmly greeted but never aggressively attacked; the string tone in the slow movements is very appealing, sweet and well blended. The two solo violins carry on an urbane and charming dialogue, their voices twining in and out of each other like those of a long-married couple who can anticipate what the other will say. In the final Gigues everyone lets their hair down for an end-of-concerto romp. Attractive music performed with skill’ (BBC Music Magazine)

The publication in 1747 of William Boyce’s Twelve Sonatas for Two Violins with a Bass for the Violoncello or Harpsicord confirmed his position as one of the leaders of English musical life. He was born in London in 1711, the son of a cabinet maker, and was a choirboy at St Paul’s Cathedral before studying with Maurice Greene and John Christopher Pepusch. He was appointed a composer to the Chapel Royal in 1736 while he was still in his twenties, and in that year wrote his short oratorio David’s Lamentation over Saul and Jonathan. It was the start of a series of extended concerted works that brought him to the notice of the public, including the opera Peleus and Thetis (recorded on Hyperion CDA66935) of about 1740 and the serenata Solomon of 1742 (CDA66378).

The Twelve Sonatas appeared at a time when it looked as if the trio sonata was in decline in England. A fair number of sets of trio sonatas had been published in London earlier in the century, including two by Handel, but in the 1740s there was renewed interest in the concerto grosso, prompted doubtless by the establishment of amateur orchestral societies in many provincial towns. Boyce gave the English trio sonata a new lease of life, in part because his collection was seen as suitable material for professional and amateur orchestras. The enormous subscription list of 487 names includes individuals the length and breadth of Britain (as well a number in America), among them Handel, Arne, Pepusch, Greene, and many lesser composers. Some subscribers asked for several copies (631 were spoken for), and it is likely that some of them, such as Jonathan Tyers of Vauxhall Gardens (4), John Rich of Covent Garden (4) and the Philharmonic Society of Dublin (6), were intending to make up sets of orchestral parts. Indeed, Charles Burney wrote that Boyce’s trio sonatas ‘were longer and more generally purchased, performed and admired, than any productions of the kind in this kingdom, except those of Corelli’, and were ‘not only in constant use, as chamber Music, in private concerts, for which they were originally designed, but in our theatres, as act-tunes, and public gardens, as favourite pieces, during many years’.

Despite Burney’s statement that Boyce originally intended his sonatas ‘as chamber Music’ for ‘private concerts’, there is evidence that at least some of them were composed with orchestral performance in mind. We have included in this recording three sonatas (numbered here 13 to 15) that survive only in a manuscript at the Fitzwilliam Museum in Cambridge. They are ascribed to Boyce with a note that they were ‘not published’ and were ‘copied from a MS in the Handwriting of S.Wesley Esqre.’. Samuel Wesley (1766–1837) studied with Boyce as a child and may have obtained them direct from the composer. They certainly seem to be genuine, though Nos 13 and 15 are probably early, immature works much influenced by Corelli’s da camera sonatas Opp 2 and 4. This may be why they were left out of the 1747 publication, although they also have solo and tutti marks, and No 15 ends with a minuet entirely in two parts, so perhaps Boyce also thought them too overtly orchestral in texture to appeal to chamber music enthusiasts. No 14, by contrast, is a true chamber work mostly in a light, galant style, with the first two movements covered in trills and ornamental triplets; it was probably written long after 1747.

The Twelve Sonatas do not have unambiguous solo and tutti marks, though the middle section of the minuet in No 3, scored for two violins, is marked ‘Solo’, which could be prescriptive (indicating solo rather than tutti) as well as descriptive (pointing out that the continuo is silenced at that point). Boyce certainly used sections of one of them as an orchestral piece—the ‘first and last part Dr Boyce’s 9th Sonata’ being specified as the overture of one of his Shakespeare odes—and in general the success of Boyce’s collection seems to have popularized a new genre of orchestral trio sonatas, though solo and tutti indications are found as early as 1733 in a set by J S Humphries. A number of later sets of trio sonatas also contain solo and tutti marks, and J G Freake wrote on the title-page of his Op 5 (1758) that ‘These SONATAS may be played as CONCERTOS those who play ye Ripieno’s must observe the Words Solo & Tutti’, while J G Cushin’s set of c1780 has the note: ‘These Sonatas may be performed as Concertos by Doubling each part, & leaving the Solo-Parts for the two Principal violins & violoncello’. The practice of playing trio sonatas orchestrally was not unknown on the Continent. Works by a number of Viennese court composers, including Fux and Gottlieb Muffat, survive in sets of parts with multiple copies, while Johann Stamitz’s Six sonatas à trois parties Op 1 are said on the title page to be ‘à trois, ou avec toute l’orchestre’.

It is significant that the Twelve Sonatas seem to divide into two groups. The odd-numbered ones contain most of the movements with overtly orchestral textures, such as the minuet of No 3, the outer movements of No 5, the fast movements of No 9, and the Affettuoso of No 11. They also have all the fugues, perhaps the movements that most demand the power of an orchestra. By contrast, the even-numbered sonatas are generally written in a more detailed, virtuosic style that demands solo instruments. For this reason, we have alternated orchestral and one-to-a-part performances on this recording, though we have made an exception of No 8, particularly because of its charming galant minuet which seems to foreshadow the world of the Mannheim symphonists. We have mostly turned the orchestral sonatas into concerti grossi simply by treating the passages marked piano as solos, though in a few movements, such as the expressive Andante of No 7 and the delightful Affettuoso hornpipe in No 11, we have been unable to resist the temptation to devise more elaborate schemes. Solo and tutti marks only appear sporadically in Nos 13 and 15, and we have added a number of others; there are none, for instance, in the first two movements of No 15, but they are clearly implied by the writing. Following Boyce’s orchestral practice as documented in his autograph scores and sets of parts, we have doubled the bass with violas, and added a bassoon in some of the movements.

It is often said of Boyce’s trio sonatas that they are remarkably varied in form. Although, as we have seen, they fall roughly into interlocking da chiesa and da camera sets, there is an astonishing range of forms and styles among the fifty-odd movements. The Twelve Sonatas are all in three or four movements, though Boyce often avoids slow–fast–slow–fast and fast–slow–fast, the conventional trio sonata patterns. Thus, in No 1 a slow movement is followed by two fast ones, and in No 2 two slow movements are followed by two faster ones, while in No 4 there is only one fast movement: an extended and impassioned Gratioso is followed by a haunting funeral march and a lively gavotte. The pattern of No 12 is of particular interest, since a lively gavotte encloses an expressive minuet. Boyce may have invented this unusual and effective design, and probably used it first in his early overture to Peleus and Thetis.

The Twelve Sonatas are equally varied in style. Boyce and his contemporaries were trained in an idiom that drew on Corelli, Handel and Purcell, and in later life they used these increasingly antique styles alongside more modern ones. Thus, in No 9 in C major a Corellian Adagio and a Handelian fugue are followed by a strict three-part canon in A minor in which the second violin follows the first a fourth lower in E minor—Boyce even gives it its own key signature. This movement harks back to the sixteenth century and it is followed by a much more modern one that recalls some of the sparkling movements in Telemann’s suites, though we do not know if Boyce knew any of his music. Another movement that seems to look outside English music is the beautiful Largo of No 10 which, in its refined harmony and carefully spaced textures, recalls the air tendre movements in Couperin’s Les Nations of 1726. Yet it is the typically English movements which seem most characteristic of the composer and stay longest in the memory. The refined and beautiful opening of No 8 could only be by an English composer, and the same is true of the serene Affettuoso that closes No 6, with its folk-like main theme. Indeed, Charles Burney rightly emphasized the English character of Boyce’s music when he wrote that ‘there is an original and sterling merit in his productions, founded as much on the study of our own old masters, as on the best models of other countries, that gives to all his works a peculiar stamp and character of his own, for strength, clearness, and facility, without any mixture of styles, or extraneous and heterogeneous ornaments’.