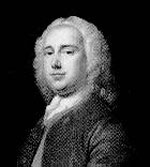 born: 1711
died: 7 February 1779
country: United Kingdom
Born in London, Boyce was a choirboy at St Paul's Cathedral before studying music with Maurice Greene after his voice broke. His first professional appointment came in 1734 when he was employed as an organist at the Oxford Chapel. He went on to take a number of similar posts before being appointed Master of the King's Musick in 1755 and becoming organist at the Chapel Royal in 1758.

When Boyce's deafness became so bad that he was unable to continue in his organist posts, he retired and worked on completing the compilation Cathedral Music that his teacher Greene had left incomplete at his death. This led to Boyce editing works by the likes of William Byrd and Henry Purcell. Many of the pieces in the collection are still used in Anglican services today.

Boyce is best known for his set of eight symphonies, his anthems and his odes. He also wrote the masque Peleus and Thetis and songs for John Dryden's Secular Masque, incidental music for William Shakespeare's The Tempest, Cymbeline, Romeo and Juliet and The Winter's Tale, and a quantity of chamber music including a set of twelve trio sonatas.