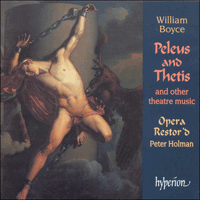 Peleus and Thetis & other theatre music

This is an extremely enjoyable recording. Boyce's theatre music is particularly successful: it is light, almost trivial, but instantly catchy and peculiarly memorable.

The major work is Peleus and Thetis and tells of the mortal Peleus' love for the goddess Thetis, Jupiter's rage at this, and his subsequent acquiescence following the prophecy from Prometheus (chained to the rock and having his liver pecked out by a vulture the while) that Thetis' child will be 'greater than the father'.

Also included are the 'Music for animating the statue' from The Winter's Tale (Florizel and Perdita, as it became in David Garrick's adaptation) and, by contrast, the sombre Dirge from Romeo and Juliet (which accompanied the carrying out of the supposedly-dead Juliet—a scene not in Shakespeare's original play but which was popularly interpolated in the eighteenth century). The constant tolling of the funeral bell is strangely haunting, and apparently contributed to the success of Garrick's production at Drury Lane over the rival Romeo and Juliet being presented simultaneously across the road in Covent Garden.

William Boyce is best known today as a composer of instrumental music. His charming set of eight Symphonies, Op 2, has been recorded many times, and his trio sonatas are now all available on compact discs (Hyperion CDA67151/2). Towards the end of his life he was much involved with Anglican church music, as a prolific composer of anthems and the editor of the three-volume collection of Cathedral Music (London, 1760, 1768, 1773). But he made his name with a remarkable series of major works for the theatre and the concert hall, beginning with the short oratorio David’s Lamentation over Saul and Jonathan (1736), the masque Peleus and Thetis (before 1740), the serenata Solomon (1742, recorded on Hyperion CDA66378), and The Secular Masque (c1746). By then he was beginning to be noticed by London’s theatre managers. He set the dirge in Shakespeare’s Cymbeline for Covent Garden in 1746 and wrote a good deal for David Garrick at the rival Drury Lane Theatre in the 1750s. It is not clear why his theatrical career came to an end – he wrote his last-known incidental music in 1759 – but it probably had to do with his increasing commitments at court, as Master of the King’s Musick from 1757 and one of the organists of the Chapel Royal from 1758.

We know nothing about the circumstances in which Peleus and Thetis was composed. There is no sign that it was ever given a stage production in the eighteenth century, and it may have been performed in concert form by the London music club The Sons of Apollo in the late 1730s. The autograph score and parts in the Bodleian Library seem to date from a later revival, such as the one given at the Boyce festival in Cambridge in 1749. The text was drawn from Lord Lansdowne’s adaptation of Shakespeare’s The Merchant of Venice, first performed in 1701 with music by John Eccles. Boyce probably chose it as a response to Arne’s setting of Milton’s masque Comus (1738), which set a fashion for the revival of old texts. In the same spirit, Handel turned to Milton’s L’Allegro ed il Penseroso in 1740.

The masque is set on the summit of Mount Caucasus, where Prometheus has been chained for aeons for the crime of stealing fire from the gods. His torment (a vulture continually pecks at his liver) has given him the gift of prophecy, and so Peleus comes to consult him about his forbidden love for the nymph Thetis, who is also being pursued by Jupiter. As the late Roger Fiske pointed out, this Wagnerian situation drew from Boyce some surprisingly dramatic music, with an unusual number of ensembles. In particular there is a fine ‘trembling’ chorus that accompanies Jupiter’s descent from the heavens, surely inspired by the Frost music in Purcell’s King Arthur, and a remarkable trio in which he rages against Peleus and Thetis, similarly inspired by the trio for Acis, Galatea and Polyphemus in Handel’s Acis and Galatea. But there are many places where the young Boyce had already developed a mature individual voice, such as Peleus’s forward-looking and beautifully scored aria of defiance against Jupiter, ‘Armed with love, and Thetis by’, or Jupiter’s aria ‘The fatal blessing I resign’, which combines an almost Bach-like contrapuntal complexity with heartfelt pathos.

The origin of Corydon and Miranda is also shrouded in mystery. It is known that it was incorporated into Mrs Clive’s play The Rehearsal, produced at Drury Lane in 1750, but a comparison between the text of Clive’s play and Boyce’s autograph score in the Bodleian Library shows that the version performed then was not the original one and that the work was written for some earlier occasion, probably as a short independent work. The story is a simple love triangle between the shepherd, Corydon, and two shepherdesses, the faithful Miranda and the faithless Marcella. Despite the work’s title, Marcella is really the most important character with two superb airs, the first a sensuous minuet, the second a remarkable revenge number with a contrasted middle section and most advanced orchestral writing. The moral is drawn at the end in a short chorus. The work has no overture, so we have borrowed one suitable in size, key, mood and scoring from one of Boyce’s court odes.

Boyce wrote some of his most successful theatre music for Garrick’s Shakespeare productions in the 1750s. The Dirge from Romeo and Juliet dates from the autumn of 1750, when Covent Garden and Drury Lane were running rival productions of the play. The novelty of the Covent Garden production was a funeral procession at the beginning of Act V, carrying Juliet’s supposedly dead body across the stage to Thomas Arne’s music. Not to be outdone, Garrick got Boyce to write a similar piece for Drury Lane, also incorporating the continuous tolling of a funeral bell; it survives in an autograph score in the Bodleian Library. This scene was included in Romeo and Juliet for about a century. Fanny Kemble wrote in 1878 that ‘even in my time [c1830] it was still performed, and an exact representation of a funeral procession, such as one meets every day in Rome, with torch-bearing priests, and a bier covered with its black velvet pall, embroidered with skull cross-bones, with a corpse-like figure stretched upon it, marched round the stage, chanting some portion of the fine Roman Catholic requiem music’. By then, it seems, plainsong had replaced the music by Arne and Boyce.

A number of pieces for The Winter’s Tale were ascribed to Boyce in nineteenth-century publications, but only two seem to be authentic. They were written for Florizel and Perdita, Garrick’s 1756 reworking of the play, and survive in autograph score in the Bodleian Library. ‘Get you hence, for I must go’ is a cheerful gavotte-like setting of the ‘merry ballad’ sung by Autolycus, Mopsa and Dorcas in Act IV, Scene 4 of Shakespeare’s play. In the play Autolycus tells Mopsa that it ‘goes to the tune of ‘Two Maids Wooing a Man’’, but Boyce, like Robert Johnson in the early seventeenth century, gave it an original setting too complex to be mistaken for a ballad. Autolycus was no longer required to sing in Garrick’s time, and his part was taken by an unnamed shepherd. Shakespeare called for music to accompany the moment in Act V, Scene 3 of the play when Hermione’s statue comes to life, but no setting has survived from the seventeenth century, and Boyce’s simple but evocative two-section piece seems to be the only one from the eighteenth century.