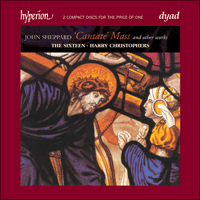 Though his music has only recently begun to receive the attention it deserves, John Sheppard was without doubt a composer of the highest stature. Like Tallis and Tye, he was active in the turbulent years that witnessed the culmination of Latin polyphony and led up to its destruction in the Reformation. With the exception of a handful of works for the Anglican church, Sheppard’s surviving output consists entirely of Latin music for the Sarum rite: Masses, responds and hymns. He may be recognized as one of the most distinctive voices of his time, and whether in vigorous, extrovert mood (as in Verbum caro and the Easter Gradual Haec dies) or more contemplative vein (as in the Compline responds In manus tuas and In pace, and the Paschal Kyrie), his music speaks with rare individuality and sustains a highly charged atmosphere.

Little is known for certain of Sheppard’s life other than that he was appointed informator choristarum at Magdalen College, Oxford, in 1543, and that he was a Gentlemen of the Chapel Royal in the 1550s. Although his name appears on the lists of those present at the coronation of Elizabeth I in 1559 he was in fact buried in St Margaret’s, Westminster, on 21 December the previous year. His date of birth is presumed to have been around 1515, for in his supplication for the degree of DMus in 1554 he is described as having studied music for twenty years; it has also been suggested (by Hugh Benham) that the fact that his works are not represented in the important set of manuscripts at Peterhouse, Cambridge, copied c1540–47, may be taken to suggest that he was rather younger than Tallis or Tye.

The main reason that the music of Sheppard remained unknown for so long lies simply in the vagaries of manuscript survival. Many of his responds and hymns are now preserved only in the anthology compiled in the last decades of the sixteenth century by John Baldwin (Christ Church, Oxford, MSS 979–983), which lacks its tenor part-book. Fortunately the task of reconstruction is less arduous than it might at first seem because the tenor often carries the plainchant cantus firmus, easily enough supplied from a contemporary Gradual. But the process delayed the preparation in the 1920s of the Tudor Church Music edition, which then ran out of funds before the Sheppard volumes could be issued. Although a few pioneers championed Sheppard’s music—such as R R Terry, who performed the ‘Cantate’ Mass at Westminster Cathedral, London, in 1917—it was not until the late 1960s that it began to be available in printed editions. Particular tribute is due to David Wulstan, whose performances with The Clerkes of Oxenford were an unforgettable inspiration.

Sheppard’s unorthodox treatment of dissonance suggests that he had little in common with the strictly disciplined procedures of Palestrina; not only did he relish the juxtaposition of the natural and the sharpened leading note (producing the so-called ‘false relation’ and the English cadence), but he also defied convention by employing unprepared harmonic sevenths (in Libera nos, salva nos I, for example) as well as fourths, and by tolerating barely disguised consecutive octaves and fifths, characteristics that either suggest a certain carelessness or else an uninhibited sense of creativity. His music is permeated by an intuitive mastery of vocal scoring in which the distinctive colour of each voice is allowed to make its own contribution. Like Tallis, he wrote for a choir with a maximum overall range of just over three octaves, and often included a part for the high trebles that were a particular feature of English sacred music in this period. The unusually rich texture of the music is partly attributable to the presence of two countertenor parts, whose top note lies exactly an octave below that of the trebles; imitative contrapuntal entries between these voices are frequently exploited. Other voices are also occasionally divided, either for the duration of a work (for example, the Libera nos settings, delicately scored for two trebles, two means, two altos and bass) or momentarily (as in the thrilling final chord of Verbum caro). In contrast, Spiritus Sanctus and Laudem dicite are scored for men’s voices only, with the cantus firmus lying in the middle of the five-part texture.

The great majority of Sheppard’s Latin works take the form of responds and hymns whose texts are drawn from the Offices of the major feasts in the liturgical year and these texts provided him with a wealth of poetic inspiration. Like Tallis, he adopted the alternatim pattern, setting the even-numbered verses to polyphony that incorporated the plainchant as a cantus firmus. Though the principle of cantus firmus construction may be considered medieval, the role that it came to play in mid-sixteenth-century English music was at the same time more forward-looking: besides its liturgical function, the chant acts as a harmonic backbone, moving steadily in rather longer note values than the other parts and providing the anchor for the suspensions that permeate their imitative material.

The ‘Cantate’ Mass is by far the most elaborate of Sheppard’s five settings, and stands as a supreme example of that peculiarly English genre, the festal Mass. Nothing is known about the occasion for which it was written, though judging by its elaborate scale and scoring, this must have been of major significance. It follows the well established technique of drawing some material—notably the cantus firmus that appears from time to time in the tenor part, and the opening bars common to each movement—from another work, presumably entitled ‘Cantate’ and apparently no longer extant. From its stylistic maturity alone, it seems that the Mass must date from the Catholic revival in the reign of Queen Mary (1553–1558); Sheppard would almost certainly have been too young to have produced such a work in the years before Henry VIII began to impose the liturgical changes that would render it inadmissible. Sheppard conformed with the normal practice of his time in not setting the Kyrie (which in the Sarum rite was generally sung to plainchant, with the addition of extra words), and in laying out each of the four movements to approximately the same length and dividing them into distinct sections. The Sanctus and Agnus Dei therefore contain more extended melismatic writing than the Gloria and Credo, substantial parts of whose text are omitted, again following local convention.

Sheppard’s intuitive mastery of vocal scoring is nowhere more in evidence than the ‘Cantate’ Mass. Its six voices—treble, mean, two countertenors, tenor and bass—together span a range of just over three octaves, and are employed to thrilling effect in sonorous writing for full choir. Each section opens with more delicate three- and four-part material, in which high voices are set off against low ones, a technique familiar from the votive antiphons of Taverner’s generation. Like all his English contemporaries, Sheppard adopted a devotional rather than an overtly expressive approach to text-setting, which helped to facilitate a strong sense of continuity over long stretches of music. Repetition of text is relatively rarely encountered; once a new phrase has been highlighted by imitative entries passing through the voices, it tends to proceed in extended melisma. While it is difficult to select particular moments from a work of such sustained inspiration, mention must be made of the pealing entries of ‘Filius Patris’ (in the Gloria) on three successive beats, of the soaring treble part in the Benedictus, and of the opening of the third Agnus Dei where the mean rises above the treble in a phrase of the utmost poignancy.

Finally, brief mention must be made of three curious examples of written-out ornaments, faithfully recorded in the unique manuscript source. Though scarcely credible, they do in fact have parallels in the works of Palestrina, for example, and could represent either the hand of an insubordinate countertenor or else an aspect of performance practice that we have been reluctant to acknowledge.