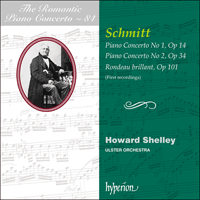 Composer and conductor, pianist and pedagogue: Aloys Schmitt was respected by his peers and largely forgotten by posterity. As so often in this series, the three works recorded here will have listeners questioning that posthumous neglect.

It is a well-known fact that approximately ninety per cent of an iceberg is underwater. With global warming the great issue de nos jours, it is an appropriate metaphor to introduce the composer of the three works presented here. Why? Because a list of all the composers—good, bad and indifferent—actively writing music and having it published during the nineteenth century reveals almost the same proportion: one tenth of the names on that list would be more or less familiar today—names above the waterline, as it were; the remaining ninety per cent continue to be submerged, half-remembered or totally forgotten, despite achieving fame and acclaim during their lives.

Among that ninety per cent is Aloys Schmitt. Few will have heard of him or a note of his music (though some of it remains in print and is readily available). Little of his output can have featured on any concert programme for many a long year. And yet, listening to the music on this album, we can say that, if not a genius on the same Olympian level as Weber, Hummel or Chopin, he was an accomplished and prolific composer of impressive achievements. His teaching method became famous as the Schmitt school and was widely used. To Percy A Scholes (Oxford Companion to Music, ninth edition, 1955) he was ‘a notable pedagogue, and young people of all civilized nations have passed millions of hours in his company by the medium of “Exercises”’, though Scholes admits that these are ‘now largely discarded as lacking musical interest’. Nevertheless, Schmitt’s educational works for piano-playing were held in high esteem by Liszt and were well thought of in their day. Included among them are what is considered his greatest pedagogical work, the Method of piano playing (Op 114), and his études Opp 16 (still in print as Preparatory exercises), 55, 61 and 116. Respected by his peers, he was an acquaintance of Weber, Paganini, Liszt and Chopin, and friends with Fanny and Felix Mendelssohn, and Louis Spohr, with whom he enjoyed a lively correspondence.

Aloys Schmitt was born on 26 August 1788 in Erlenbach am Main, Bavaria, and received his first musical training from his father Franz Bartholomäus Schmitt, the school principal and organist. From 1800 he lived in Offenbach in the house of the composer and music publisher Johann Anton André, where André himself, G J Vollweiler and the musical polymath Philipp Carl Hoffmann were his teachers.

In 1806 we find Schmitt in Frankfurt devoting himself to further studies, composing his own first works, and on 23 March 1810 making his debut as a pianist. It was during this time that he began to acquire a reputation as a successful piano teacher in his own right—among his pupils was Ferdinand Hiller—before embarking on numerous concert tours throughout Holland, Belgium, the Rhine, Bavaria and Northern Germany. Indeed, an early edition of Grove notes that though ‘his reputation as a teacher was great, [he] had a passion for journeys, and his pupils complained about his frequent absences’.

After migrating to Munich (1824), Berlin (1825-26) and then Hanover (where from 1826 to 1829 he was court organist and ‘chamber musician’ to the Duke of Cambridge), Schmitt returned to Frankfurt. Though he seems to have seldom performed as a pianist thereafter, he was sufficiently regarded to have captured the attention of the young Chopin, who wrote from Vienna to his friend Jan Matuszyński on Christmas Day 1830:

Aloys Schmitt, a Frankfurt pianist who is well known for his Études, is here. He is over forty—I’ve made his acquaintance and he has promised to visit me. He intends to give a concert so I must take second place. He is a very competent person and I hope we still get on well from a musical point of view.

Only a month later, however, Chopin had heard Schmitt and wrote to his former teacher Józef Elsner: ‘Aloys Schmitt, a pianist from Frankfurt, had a rough reception although he is over forty and composes eighty-year-old music!’

In 1834 Schmitt and others founded the Frankfurter Instrumentalverein, of which he was conductor until 1844. He died in Frankfurt on 25 July 1866. In all, he composed over 100 works, including four operas, one operetta, two oratorios (Moses and Ruth), masses, various sonatas, rondos, overtures, string quartets, symphonies, four piano concertos, songs and cantatas.

The Piano Concerto No 1 in C minor is scored for flute, two oboes, two bassoons, two horns, two trumpets, timpani and strings. The opening bars might well be mistaken for something by Beethoven—the beginning of his Piano Concerto No 3 in C minor, for instance. For others, the semiquaver-triplet figure we hear, present throughout the movement, might remind them of the opening of Mozart’s D minor concerto. After the soloist’s somewhat delayed entry, the second subject quickly arrives (3'51) on the oboe, a lyrical idea reminiscent of the Hummel/Weber school. Some playful writing for the piano, with the initial orchestral triplet motif much in evidence, leads to an unexpected fermata. The music remains in the relative major for a third subject, related to the first theme, then moves to the concerto’s parallel major for the return of the second subject. These ideas are subjected to a variety of treatments before the piano’s cadenza at 11'42. After this the soloist has little to say before the end of the movement.

The slow movement (marked adagio con moto quasi andante, in 3/4 and the key of E flat major) begins with a chorale subject played by a string quartet. The soloist takes this up and then offers a second solemn hymn-like melody of its own, distinctly Mozartean in flavour and none the worse for that. The string quartet returns, and the movement ends in G major, in which key the piano’s slow arpeggios (marked cadenza) take us back to the concerto’s tonic key once more and directly into the last movement’s jaunty first subject. (The finale of Sterndale Bennett’s fourth piano concerto begins with a similar motif.) This almost larky mood soon comes to a subdued conclusion. A second theme emerges (hear the woodwinds at 2'42) but Schmitt knows when he’s got a winner, and the piano returns to the first idea. Thereafter he keeps the soloist busy with varied treatments of the foregoing with skittering passages of Mozartean rectitude, ending with the orchestra’s C minor chords and that semiquaver-triplet figure with which the work began.

Schmitt’s Piano Concerto No 2 in D minor, scored for the same instruments as No 1, opens with an allegro in triple time and a plaintive theme that later suddenly erupts into Beethovenian vehemence. This theme (D-F-E / D-C sharp-D in crotchets) underpins the whole movement in different guises. Then, unexpectedly, the mood changes and we are introduced to a lilting Viennese waltz, a delightful conceit that returns throughout the movement. The exposition fades al niente and, at length, the soloist enters (3'12) with some rhapsodic, pent-up gestures which give way inevitably to the waltz theme. A dramatic virtuoso passage ensues, leading to an energetic orchestral tutti; the musical narrative alternates between the two parties (with much rapid scale and arpeggio passagework from the soloist) until 12'24. Here, after an orchestral fermata, there is a brief section that surprises with its similarity to part of the cadenza in the first movement of Alkan’s Concerto for solo piano. More brilliant writing for the keyboard leads to yet another pause and a final section (13'51), marked allegro con fuoco, which exploits all the preceding themes with some ingenuity.

The adagio second movement is in D major, with the steady pulse of the strings supporting the gentle, if somewhat undernourished, first subject in the woodwinds. This mood is countered by the piano’s forte chordal entry, which leads to an expressive legato theme and some pages of increasingly swift writing in demisemiquavers before a return to that main theme and a gradual diminuendo to the end. Schmitt follows this with another catchy tune for the finale. A second jolly theme is introduced, leaving us in no doubt that Schmitt had a surprising (and welcome) light touch, and was clearly out to enjoy himself rather in the manner of Haydn. There are few moments of respite for the soloist after this, until an orchestral recapitulation (7'03). When the soloist re-enters the music is marked con fuoco (7'44), and it is in this vein that the movement hurtles to a conclusion. One can easily imagine this single movement catching on as a lollipop on certain classical radio stations.

While the composition dates of the two concertos are uncertain, it seems that the final work on this recording—the Rondeau brillant—was written and/or published in 1839. There is, rather wonderfully for such an obscure piece, a review of it (or at least a judgement on it) by no less than Robert Schumann. In his collected journalism Music and musicians, as translated by Fanny Raymond Ritter (William Reeves, 1880), we read of:

Aloys Schmitt’s Brilliant rondo for the pianoforte, with orchestra, Op 101 … This composer is well known from his collateral relationship—which this rondo again clearly proves—to the Hummel school. All that we are accustomed to find in that, namely, correctness, clearness, flow in writing, we also find here, beside a Field-like flavour, explained, indeed, by the author’s title, ‘Souvenir of John Field’. This work distinctly betrays the great alterations that have occurred, and the different demands made in these last 10 to 15 years. Had this rondo been published earlier, it would certainly have made its way; but we scarcely think it will do so now. We have got quite beyond that half style of music in which the composer and the virtuoso allow each other to shine by turns.

Elsewhere Schumann favourably compares another of Schmitt’s rondos (in E flat, Op 78) with the Rondo in E flat major, Op 250, by his brother Jacob Schmitt. The latter ‘writes too much and takes things too easily’, while Aloys is ‘a complete example of the perfect virtuosity to which an artist may attain in a still narrower circle … How [Aloys] excels him in cultivation, taste (though not in the common, fashionable sense), and art!’

For the Rondeau, Schmitt keeps the same orchestral forces as his first two piano concertos, but with the addition of a second flute and two clarinets. Though the first pages are marked adagio and in 4/4 time, most of the piece is in 3/4 and marked tempo moderato, often in the rhythm of a polonaise (with many excursions to con vivo and back again). The basic pulse is constant, allowing the soloist to decorate the keyboard with rapid filigree runs and figurations, entirely justifying Schumann’s allusions to Field and Hummel. Equally plainly, the Rondeau could not have been written by either of them, for Schmitt is altogether his own man. After several pages of con bravura e delicatessa from the piano, the music reaches a climax. There is a long pause and, attacca, the piano leads into an all-too-brief final section in 2/4 marked presto. The polonaise theme is transformed into a glittering, nimble-fingered helter-skelter, providing a thrilling conclusion and prompting the question for a third time: why is Aloys Schmitt not among that ten per cent of composers above the waterline?