born: 26 August 1788
died: 25 July 1866
country: Germany
Few will have heard of Aloys Schmitt or a note of his music (though some of it remains in print and is readily available). Little of his output can have featured on any concert programme for many a long year. And yet we can say that, if not a genius on the same Olympian level as Weber, Hummel or Chopin, he was an accomplished and prolific composer of impressive achievements. His teaching method became famous as the Schmitt school and was widely used. To Percy A Scholes (Oxford Companion to Music, ninth edition, 1955) he was ‘a notable pedagogue, and young people of all civilized nations have passed millions of hours in his company by the medium of “Exercises”’, though Scholes admits that these are ‘now largely discarded as lacking musical interest’. Nevertheless, Schmitt’s educational works for piano-playing were held in high esteem by Liszt and were well thought of in their day. Included among them are what is considered his greatest pedagogical work, the Method of piano playing (Op 114), and his études Opp 16 (still in print as Preparatory exercises), 55, 61 and 116. Respected by his peers, he was an acquaintance of Weber, Paganini, Liszt and Chopin, and friends with Fanny and Felix Mendelssohn, and Louis Spohr, with whom he enjoyed a lively correspondence.

Aloys Schmitt was born on 26 August 1788 in Erlenbach am Main, Bavaria, and received his first musical training from his father Franz Bartholomäus Schmitt, the school principal and organist. From 1800 he lived in Offenbach in the house of the composer and music publisher Johann Anton André, where André himself, G J Vollweiler and the musical polymath Philipp Carl Hoffmann were his teachers.

In 1806 we find Schmitt in Frankfurt devoting himself to further studies, composing his own first works, and on 23 March 1810 making his debut as a pianist. It was during this time that he began to acquire a reputation as a successful piano teacher in his own right—among his pupils was Ferdinand Hiller—before embarking on numerous concert tours throughout Holland, Belgium, the Rhine, Bavaria and Northern Germany. Indeed, an early edition of Grove notes that though ‘his reputation as a teacher was great, [he] had a passion for journeys, and his pupils complained about his frequent absences’.

After migrating to Munich (1824), Berlin (1825-26) and then Hanover (where from 1826 to 1829 he was court organist and ‘chamber musician’ to the Duke of Cambridge), Schmitt returned to Frankfurt. Though he seems to have seldom performed as a pianist thereafter, he was sufficiently regarded to have captured the attention of the young Chopin, who wrote from Vienna to his friend Jan Matuszyński on Christmas Day 1830:

Aloys Schmitt, a Frankfurt pianist who is well known for his Études, is here. He is over forty—I’ve made his acquaintance and he has promised to visit me. He intends to give a concert so I must take second place. He is a very competent person and I hope we still get on well from a musical point of view.

Only a month later, however, Chopin had heard Schmitt and wrote to his former teacher Józef Elsner: ‘Aloys Schmitt, a pianist from Frankfurt, had a rough reception although he is over forty and composes eighty-year-old music!’

In 1834 Schmitt and others founded the Frankfurter Instrumentalverein, of which he was conductor until 1844. He died in Frankfurt on 25 July 1866. In all, he composed over 100 works, including four operas, one operetta, two oratorios (Moses and Ruth), masses, various sonatas, rondos, overtures, string quartets, symphonies, four piano concertos, songs and cantatas. 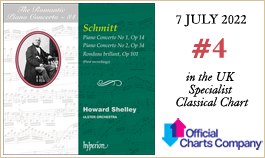