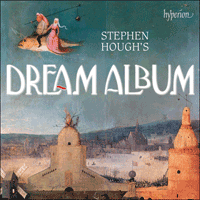 Few pianists today could devise such a recital—their own transcriptions and variations on well-known classics included as a matter of course—and seldom can these graceful, delightful pieces have had such consummate musicianship lavished on them. Such stuff as dreams are made on …

‘A bran tub of bonbons, yes, but much more than that: it is also a portrait of an artist in love with music of all sorts … witty, wistful, extrovert, introspective and cheeky by turn, this is a masterclass in a certain style of piano-playing, and a dream of an album’ (Gramophone)
‘It's hard not to be smitten by the first-class musicianship, delicacy and fancy twinkling and winking through the Minkus transcriptions, or the genuine feeling bubbling up in Dvořák's Humoresque, Elgar's Salut d'amour, or Richard Tauber's sentimental hit number Das alte Lied … a sweet album, this, superbly played and recorded’ (BBC Music Magazine)

‘I could drop the needle pretty much anywhere and enjoy what emerged, from Liszt and Sibelius to Elgar and Mompou … it's a delight from top to bottom, Hough's own gems included’ (BBC Record Review)
‘It takes a personality of flair now to serve up a few bonbons in a recital and Stephen Hough is a master of the art … the skills needed to bring off a programme like this include sparkling virtuosity and the nonchalance to suggest it was all nothing really. Hough has both, like that magician of the keyboard, Shura Cherkassky, in the previous generation’ (Financial Times)» More

‘The glory of the album lies in its demonstration of Hough's gifts as arranger, transcriber and composer. I would go a long way just to hear him play his two-minute arrangement of Blow the wind southerly, with its shimmering layers of colour and a deceptive simplicity. This is pianism of the highest order’ (Pianist)

‘Unfailingly adroit and elegant, modulating from floridity to finer feelings and back again. Also, there’s nuance and a sure sense of style … something to tickle every taste-bud; bon appétit!’ (MusicWeb International)» More
‘Hough avoids kitsch and brings to every piece his characteristic clarity, musical intelligence, wit, elegant phrasing, tasteful pedalling and an intoxicating kaleidoscope of expressive colours and moods to create an album which delights and surprises at every turn … listen to it as an entire recital album or dip in and out of it: you will be utterly charmed and transported’ (Interlude)
‘This is a marvellously varied collection of flights of fancy, transformations and transmutations which takes us through Hough’s personal dreamworld, the pieces often having special meaning for him … above all, it is Hough’s ability to draw the listener into the music through playing of enormous colour and expressive range that makes this enchanting disc so successful. The performer’s own epigrammatic thoughts on each piece, fuller programme notes from Grant Hiroshima, and a well-focused recording from the Wyastone Estate Concert Hall all add to this album’s plentiful delights’ (The Europadisc Review)» More
‘If I were choosing just one track, tricky, it would be Ernö Dohnányi’s C major Rhapsody (from Opus 11), an impetuous gem played with élan and, in the gloriously ‘big’ romantic melody that emerges, a generous and communicative heart. Fab! Excellent sound, too. Another couple of releases like this and Hough will have his own version of Your Hundred Best Tunes’ (Classical Source)» More

‘Inveterate news junkies of the world, your way out has come. For at least one good hour of your otherwise doom-laden day, you have a reason to turn off Fox or CNN and drift on feathery clouds to a far sweeter place. Your exit has been most graciously supplied by pianist Stephen Hough … whose latest recorded achievement may well be hailed as the most engaging, charming, and delightful recording of the year … or even the decade’ (Stereophile)
‘Hough’s playing is utterly captivating and intensely intimate. He’s a magician, a tease, and a brilliant performer who creates an intoxicating dream world of pianistic expression … this fabulous CD is going to get a lot of play’ (The Whole Note, Canada)» More
«Une invitation permanente au rêve, concoctée avec une délicatesse et un raffinement exquis. On ne prend pas longtemps à se demander comment un disque peut être aussi parfait» (Le Devoir)» More

We have been conditioned to believe that nostalgia is a weakness and charm an imposter. But in dreams, sleeping and waking, a different standard applies: a gentler one, less cynical, more embracing. And in the realm of music, these become potent and persuasive forces indeed. The programme recorded here, a journey through a particular personal dream-world, gives us the musician as performer, interpreter, creator and re-creator, and importantly, unmistakably, as listener.

We start with two mementos of a vanished Vienna. The elder Johann Strauss’s imperial march, stalwart encore of the annual New Year’s Concert, is invited to dance as a Radetzky Waltz. And Das alte Lied, whispered onto disc in 1928 by the inimitable Tauber, is conjured as a piano solo. Henry Love is the name on the original score, but this was the pseudonym for Hilde Loewe, which in turn was the pseudonym for Hilda Löwi—it was as Hilde Loewe that the Austrian musician emigrated to London in 1934.

The extremes of the Russian ethos are explored next. The innocent melancholy of Isserlis’s In the Steppes and the vodka-and-cigarettes drama of the 1957 hit tune Moscow Nights surround Minkus’s confections from his 1869 score of Don Quixote. The transcriptions of the Kitri and Dulcinea variations evoke the impossible weightlessness of the ballerina en pointe and indulge the Russian penchant for, as Nicolas Slonimsky wrote, ‘the airiest entrechat’.

The legacy of Andrés Segovia unites both Isaac Albéniz and Manuel Ponce—classical guitarists are responsible for keeping their names constantly before the public, Albéniz in transcription and Ponce for the large body of works written originally for the guitar. Ponce’s Intermezzo is the first of three such pieces written for the piano.

Unfairly, if Ernő Dohnányi is remembered today it is for being the grandfather of the conductor Christoph von Dohnányi rather than for his long career as pianist, composer and educator (his recordings can still be sought out). The last two decades of his life were spent in the United States after leaving his native Hungary before the outbreak of World War II.

Next, a Scandinavian pair. We rarely associate Jean Sibelius with music for the piano, but he did, in fact, compose over a hundred works for the instrument over the course of his career. The rapturous Kuusi (‘The spruce’) comes from his Five Pieces for piano, Op 75, of 1914. The suite is his most popular piano work and is also known as ‘The trees’ for the theme which unites the titles of the individual pieces.

William Seymer was, from 1917 to 1947, a music critic for major Swedish periodicals. The day-dreamy Solöga (‘Sun-eye’) is from his suite Sommarcroquiser, Op 11. No Nordic iciness here—Sommarcroquiser: ‘Summer sketches’.

There was a time when every piano bench contained Cécile Chaminade’s Pas des écharpes (‘Scarf dance’). But as the early years of the twentieth century fade from living memory, so too do the more than two hundred piano works she left behind. The charm which made Chaminade so immensely popular during her lifetime flickers still, like candles in a friendly darkened salon.

There is no theme used more by composers for sets of variations than Nicolò Paganini’s Caprice No 24 for solo violin. Written by Stephen as a concert encore, Niccolo’s Waltz is a late-night transcription with a nod in the direction of Bill Evans.

The genre of light classical music has all but disappeared. But in 1930, the great English master of the art, Eric Coates, created By the sleepy lagoon, securing immortality. Its original orchestral incarnation inspired band leader Harry James to record a big band version which topped the charts during the dark days of 1942, the same year the BBC’s Desert Island Discs chose its signature tune.

Somewhere a voice is calling by Arthur F Tate was a hit upon its composition in 1911. Have the lyrics lost any of their savour?

Dusk, and the shadows falling;
O’er land and sea;
Somewhere a voice is calling,
Calling for me!

Night, and the stars are gleaming;
Tender and true;
Dearest, my heart is dreaming,
Dreaming of you!
(Eileen Newton)

As with Sibelius, Dvořák does not immediately bring miniatures to mind. And yet he composed two that are universally beloved. The ubiquitous Humoresque is actually the seventh in a cycle of eight humoresques written in 1894 during the composer’s long stay in the United States. Songs my mother taught me is from his 1880 cycle Gypsy Songs, a set of seven songs for voice and piano.

How do we place Elgar’s two symphonies, his great cello and violin concertos, The Dream of Gerontius, immense conceptions all, in a list which begins with the tiny, sweet perfection of Salut d’amour? Composed in 1888 as a work for violin and piano, but also published in a version for piano solo, the work’s original title was ‘Liebesgruss’ (‘Love’s greeting’). It received little notice until Elgar’s publisher rechristened it with its more romantic French title; public affection has never wavered since.

Blow the wind southerly belongs to a special category of tune: it has no known composer; it is considered traditional. By traditional we mean that is a tune we seem to have always known, even before ever hearing it—waiting in our subconscious until it is revealed by an overheard performance.

Stephen Hough has described the music of Federico Mompou as ‘the music of evaporation’. Jeunes filles au jardin (‘Young girls in the garden’) is the final piece in the popular suite Scènes d’enfants (‘Scenes of childhood’). The evanescence of childhood simplicities recollected in adulthood.

We are the music makers,
And we are the dreamers of dreams
Ode (Arthur O’Shaughnessy)

Dreaming—
Isn’t this what we do when we listen to any kind of music? We suspend the reality of our ordinary lives, we long for spells to be cast, for phantoms to be grasped, to enter a state of ecstasy.

On this album, transcriptions (fourteen of them) transform, taking on new costumes and identities. The Austrian hero Radetzky turns his march into a waltz; that Australian legend Matilda exchanges her waltzing for a rhumba. For Liszt evenings have harmonies; for Sibelius a Finnish spruce tree inspires a melody of heartbreaking wistfulness.

Then Mompou’s slender masterpiece which closes the recital (from his suite Scènes d’enfants) takes me back to my own childhood. The first record we bought when I started to learn the piano was a mixed album, much like this one, on which Clive Lythgoe played this little gem. Thus I knew Mompou before I knew Mozart, and this piece has been my companion as an encore for over forty years of concerts now. I’ve never found another which could surpass its gentle charm. It was one of the first pieces I learned with my infant fingers and I hope it will be the last piece I play when my own career (was it all a dream?) finally comes to a close.