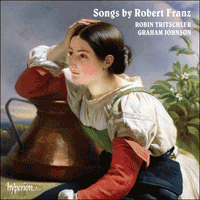 Highly regarded by such contemporaries as Mendelssohn, Schumann and Liszt, Robert Franz wrote 279 songs over the course of a long life. For this recital, Graham Johnson and Robin Tritschler have chosen forty-seven of their favourites.

‘With Johnson’s discerning support, Tritschler confirms his credentials as a natural in Lieder. His is a voice of spring, fresh and easy on the ear, produced with a care both for clarity of diction and a true singing line’ (Gramophone)
‘Song-lovers will enjoy hearing familiar words afresh … a completely original, vastly underappreciated musical voice’ (BBC Music Magazine)» More

After the death of Schubert, the German lied, with a few notable exceptions, took a nose-dive in quality. This was largely due to a ruthlessly growing demand in the domestic market of the 1830s for ultra-accessible music. The rise of Johann Strauss I was a sign of the times: melody was king, dancing was all the rage, and the idea of a song being a reflection of a great poem was forgotten in favour of vocal music’s role as a domestic stirrer of the emotions in a simple and superficial way. The number of weak, sentimental songs composed to poems, both good and bad, by entirely forgotten composers between 1830 and 1880 (many of them still listed in Challier’s famous lieder catalogue of 1885) is awe-inspiring. It is little wonder, considering the quality of the songs composed in the 1830s, that Schumann had little time for lieder—indeed, he disdained song as an unworthy, throw-away art form. And even he had to compromise (admittedly to glorious effect) when he came to write his own songs in 1840. These were composed partly in response to a soon-to-be-married man’s need to make money, to reach an audience that had found his piano music well-nigh impossible to play or listen to. Nevertheless, despite his paring down of the piano writing, and the beauty of his vocal lines, even Schumann was regarded as an avant garde composer; not all his lieder found immediate favour with a public that regarded even Mendelssohn rather too serious, even if acknowledged as the leader in the field.

For those who cared about the future of German vocal music, the emergence in 1843 of the first lieder of Robert Franz must have seemed like a new dawn. Composed by a young man who lived far away from the big, commercial cities (Halle, Handel’s birthplace, was the centre of Germany, but hardly a lively metropolis), here was music that was serious and deep without being difficult: these songs were approachable, playable, singable, and yet they made no concessions to being simply entertaining; they pulled at the heartstrings only in the most refined way. In a review, Schumann saluted some songs sent to him in manuscript, and he then sent them on to a publisher, to Franz’s grateful astonishment; Mendelssohn welcomed them too. By 1848 Franz Liszt had made a book of solo piano transcriptions of Franz’s songs, an enormous honour for a young, more or less unknown, composer. With Franz’s passion for the music of Bach and Handel, his interest in folksong and German tradition, he seemed to be the appointed saviour of music threatened by the venality of the meretricious musical market-place—even if Liszt proceeded to make his songs well enough known to find enthusiastic buyers in that same marketplace.

Schumann’s review had not been entirely uncritical. He noted a ‘trace of melancholy’ without necessarily approving of that tendency, and he thought more could have been made of the ending of Schlummerlied (track 8). The songs were welcomed on the basis of believing, as with the early songs of Brahms, that there would be a lot more to come from Franz—bigger compositions in larger forms. When these failed to materialize, and it was clear that Franz was essentially a song composer and little else, support and enthusiasm from the famous gradually drained away (apart from Liszt who wrote a monograph on Franz in 1872, and helped raise money for the composer’s potentially impoverished retirement). Franz’s increasing isolation was exacerbated by the fact that he was not the easiest person to get on with, and had little gift for cultivating friendships that would be useful for his career. He had a loyal public following of course, and for a long time his work was placed on the same level as that of Schumann and Mendelssohn. He occupied this rank for about thirty to forty years (the Mendel-Reissmann lexicon of the 1870s names him as the most important living song composer), but with the emergence of lieder by Wolf and Pfitzner, Franz gradually lost his constituency. What had seemed heartfelt and sincere in earlier years, now appeared to be over-refined and self-limiting, understated to the point of being unadventurous. Those who continued to admire him were impressed by the folksong-like economy of his music and his pudeur, his debt to Bach and Handel and the choral music of the church, his patent sincerity and refusal to write a single note of music that was merely designed for effect. The young Hugo Wolf knew these songs, but later turned against them. It seems to me that his Italienisches Liederbuch could never have been composed without the example of Franz’s unanswerable single-page creations, the music fashioned around the poem to an exquisite degree, never a note too many, the accompaniment as the perfect surrounding and setting for the highly polished jewel of the vocal line—all in all, multum in parvo, fastidious perfection (although there are of course many more layers of subtlety in the Wolf songs).

There is little very interesting about Franz’s life, apart from what we do not know. He was born Robert Knauth on 28 June 1815 in Halle, Saxony-Anhalt. The name change to Franz was the decision of his authoritarian father. (The supposition that he had deliberately arranged to have a name combining the two first names of his favourite composers, Schumann and Schubert, is a myth; our composer’s father did not want his son to study music.) Franz’s repressive Protestant upbringing seems to have led to emotional illness in later life. After two years unhappily studying in Dessau, he returned to Halle and became an organist and choir trainer (his special expertise) and did much to restore the city’s languishing reputation as a centre of music. He married Marie Hinrichs (1828–1891), also a song composer, and there were three children. Their partnership never seems to have been described as happy. He was politically left-wing and remained so long after the failed revolutions of 1848/9. Seldom travelling very far from home (apart from visits to Liszt, and to Vienna), he held various teaching and lecturing positions that he was eventually forced to renounce as a result of the failure of his hearing; he had first noticed signs of aural deterioration in his late twenties, and by his early fifties he was completely deaf. He consoled himself by arranging and orchestrating the music of Bach and Handel according to ‘modern tastes’, efforts that brought him derision from early music experts of the time such as Chrysander and Spitta. Never exactly genial, Franz became increasingly bitter and cantankerous, denouncing modernity and bemoaning the fact that he and his music belonged to an earlier age. He died in Halle on 24 October 1892.

Franz might now be dubbed a petit maître, a classification that would have infuriated him. There are many composers, familiar to lovers of song, whose achievements, though not gargantuan, are irreplaceable—these are more usually French and English, rather than German, although the name Peter Cornelius also comes to mind. Where would we be without Henri Duparc, Reynaldo Hahn, Ivor Gurney, Roger Quilter, Michael Head, and so many more inspired, if rather one-sided, miniaturists?

There are 279 Franz songs. Eleven poets are represented on this disc. Those who are not recorded here are in several categories. First, there are those that were, and remain, significant poets in the lieder repertoire with links to more than one composer: Adelbert von Chamisso (5 songs); Heinrich Hoffmann von Fallersleben (6); the Brahms poet Carl Reinhold (1); Friedrich Rückert (7); Mirza-Schaffy/Bodenstedt (4); the Schumann poet Wolfgang Müller von Königswinter (3). There are foreign writers set in translation: Hafis (1); Felicia Hemans (1); Alexander Petőfi (2). There is then a category of writers who were celebrated in their time, but who are scarcely known in the Germany of today: Rudolf Gottschall (2); Ida, Gräfin Hahn-Hahn (3); Betty Paolo (Babette Glück) (1). Local writers with connections to Halle were Robert Prutz (1) and Otto Roquette (5). Poets who were by no means national figures but who possibly had personal links with Franz in Halle were Ferdinand Arndt (1); Karl August Lebret (1); Karl Mayer (1); Maria Jäger (3); Gottfried Ratorp (1); Otto Röser (2); Heinrich Silesius (1); W Viol (1); Max Waldau (7); Johann Sebastian Welhaven (1). There are three songs by unknown poets, and fifteen folksong texts.