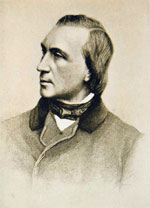 born: 28 June 1815
died: 24 October 1892
country: Germany
There is little very interesting about Franz’s life, apart from what we do not know. He was born Robert Knauth on 28 June 1815 in Halle, Saxony-Anhalt. The name change to Franz was the decision of his authoritarian father. (The supposition that he had deliberately arranged to have a name combining the two first names of his favourite composers, Schumann and Schubert, is a myth; our composer’s father did not want his son to study music.) Franz’s repressive Protestant upbringing seems to have led to emotional illness in later life. After two years unhappily studying in Dessau, he returned to Halle and became an organist and choir trainer (his special expertise) and did much to restore the city’s languishing reputation as a centre of music. He married Marie Hinrichs (1828–1891), also a song composer, and there were three children. Their partnership never seems to have been described as happy. He was politically left-wing and remained so long after the failed revolutions of 1848/9. Seldom travelling very far from home (apart from visits to Liszt, and to Vienna), he held various teaching and lecturing positions that he was eventually forced to renounce as a result of the failure of his hearing; he had first noticed signs of aural deterioration in his late twenties, and by his early fifties he was completely deaf. He consoled himself by arranging and orchestrating the music of Bach and Handel according to ‘modern tastes’, efforts that brought him derision from early music experts of the time such as Chrysander and Spitta. Never exactly genial, Franz became increasingly bitter and cantankerous, denouncing modernity and bemoaning the fact that he and his music belonged to an earlier age. He died in Halle on 24 October 1892.