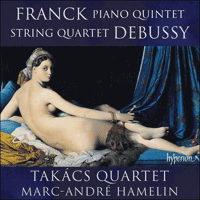 Franck’s Piano Quintet and Debussy’s String Quartet make an apt and unusual coupling, each work its composer’s only, unsurpassable, contribution to the genre. Both receive authoritative performances from Marc-André Hamelin and the Takács Quartet.

‘When the seasoned artistry of the Takács Quartet blends with the thoughtful brilliance of Marc-André Hamelin, a rare alchemy occurs … every measure of this performance affords pleasure … very highly recommended’ (Gramophone)
‘The Takács Quartet matches the music’s mystic fervour and impassioned rhetoric with burnished intensity of tone, through which Marc-André Hamelin’s apparently effortless virtuosity dashes and dives with scintillating clarity … and the sound quality is absolutely splendid’ (BBC Music Magazine)» More

‘The quintet (1879) shares that same big, romantic sound and emotional intensity of the violin sonata, beautifully brought out here by Marc-André Hamelin and the Takács in a stirring, virtuosic recording—an ideal way to encounter a still unfamiliar work’ (The Observer)» More

‘Marc-André Hamelin has made a number of outstanding recordings, yet his playing in Franck’s Quintet is in a class apart, captured in sound of almost tactile presence … the Takács follows him every inch of the way, with playing of impassioned eloquence that fully conveys the music’s sensuous longing and (especially in the central Lento) its tantalising inflamed purity’ (The Strad)» More
‘The Takács Quartet’s playing is always exemplary’ (Financial Times)» More

‘This admirably vivid performance never conveys the feeling of pianist and colleagues going their separate ways. Rather, they catch fire from each other's interactions’ (Limelight, Australia)» More

‘This is a superb record, of rare musical integrity and commitment’ (International Piano)» More

After the Franco-Prussian War and the horrors of the Commune, there was a determination to show that France was not only free of the invader, but also once again a functioning entity. The foundation of the Société Nationale de Musique in 1871, with the motto ‘Ars Gallica’, was to provide an invaluable platform for the works of younger French composers. And not only the younger ones: it was in all probability the promise of performance in a respectable milieu that, among other things, encouraged César Franck in 1879 to break his almost forty years of silence on the chamber music front. From his three piano trios of 1840 he now graduated to a Piano Quintet in F minor, first performed at the Société on 17 January 1880 with its dedicatee Saint-Saëns at the keyboard. Piano quintets were certainly not unknown in this venue: Saint-Saëns’s own, written at the age of twenty, had been heard there as well as Widor’s, together with those of such forgotten names as Georges Pfeiffer and René de Boisdeffre. But it’s fair to say that these works gave little idea of what that January audience was in for.

Some idea of its unique qualities may be gleaned from two incidents. First, Franck’s wife took against the piece. As his biographer Léon Vallas records: ‘She detested it, had a horror of it; she raged in front of her husband’s pupils, accusing them as a body—a body that included the beautiful Augusta Holmès—of having driven him to compose such a work.’ Given that rumours were already rife of Franck’s attraction to the young lady in question (described by Rimsky-Korsakov as ‘a very décolletée person’), Mme Franck might have done better to hold her tongue. But the discords did not end there. Saint-Saëns as a young man was said to have proposed to Mlle Holmès, but was refused as having scant prospects and as being sickly (in the event he outlived her by eighteen years), and it seems he may have interpreted the passionate nature of Franck’s Quintet as a scandalous affront to her, coming from a married man—and a professor of the organ, no less. Anyway, immediately after that first performance he stalked off the platform leaving the manuscript, dedication and all, on the piano.

All of this seems less bizarre once you have actually heard the Quintet. Even Liszt, himself no shrinking violet, was shocked by its passionate intensity, erotic or otherwise. It is notable that, even so, Franck was careful to build such a wild composition on classical lines, the outer movements observing sonata form and enclosing a slower movement in traditional ABA or lied structure. The opening of the first movement sets the tone, in the extreme contrast between the ‘dramatico’ challenge thrown down by the strings, with its fierce dotted rhythms recalling the opening of Beethoven’s F minor Quartet, Op 95, and the ‘espressivo’ response from the piano, to be played with slight rubato. From here on, contrast continues to be the order of the day, not least in the continual modulations, so that the ground seems always to be shifting under your feet—one thinks of the response attributed to the young Debussy, who attended Franck’s organ class briefly around this time and who, urged by the maître to ‘Modulate, modulate!’ is said to have retorted: ‘Why should I modulate? I’m perfectly happy where I am.’

Franck observed that the key of the central movement, A minor, could be justified as the relative minor of the dominant of F minor and that he intended the key as a link between the outer movements. True as this is, it hardly explains the sense of total disorientation we feel—almost Schönberg’s ‘air from another planet’. Here, as in the finale, Franck repeats a suave theme from the first movement, one that typically hovers round a single note, a kind of ‘aspiration towards the heights’, as one French commentator put it. Rhythmically, too, it conforms to a habitual Franckian pattern with a long note at the centre of each bar, while on the harmonic front we find modulations aplenty, but also chords that shift between major and minor in the manner of Schubert.

The finale begins with the shock of tremolo violins, but as yet no tune. This lack is soon supplied, and generously, and in due course the suave theme once again brings respite from the more tortuous music around it, but the whole movement has an unstable feel, including some strange subterranean grumbles from piano and cello. Although the listener cannot be expected to realize the fact, some of the instability derives from the distant keys through which the music passes. Franck’s pupil and biographer, Vincent d’Indy, found this feature hard to stomach, marking as it did ‘a startling contradiction with the formal principles of tonal construction that the maître had taught all his life’, but concluded by confessing that ‘only the genius of the maître could achieve a tonal equilibrium constructed on these paradoxical bases, and draw from them this moving composition that, even so, deserves our admiration’. Amen to that.

For whatever reason, amid the welter of French violin sonatas, piano trios and piano quartets written in the 1870s and ’80s, string quartets were in relatively short supply, certainly from the major composers. Whether or not intimidated by the ghost of Beethoven, Franck and Fauré did not venture to write one until they were sixty-eight and seventy-nine respectively (in 1890 and 1924). For Debussy, and later Ravel, to enter this domain around the age of thirty was to court charges of presumption.

Before the first performance of the String Quartet by the Ysaÿe Quartet on 29 December 1893, audiences at the Société Nationale had already heard Debussy’s cantata La damoiselle élue, of which one critic wrote prophetically ‘this subcutaneous injection may possibly produce dangerous eruptions among the young composers of the near future’. The Quartet too was to have a decisive influence, notably on Ravel. Some of the immediate responses from the critics were enthusiastic, but not those of Chausson, with whom Debussy was very friendly at the time. It’s clear from a letter Debussy wrote to him on 5 February 1894 that Chausson liked things in the work which Debussy would rather had remained undetected, and that he found Debussy’s forms lacking in decorum: ‘I’ll write another one which will be for you, and I’ll try and bring some nobility to my forms’, responded Debussy, with just a hint of acid.

We can only guess as to exactly which parts of the Quartet Chausson objected to: the scherzo perhaps, full of flying pizzicati, and very probably a reminiscence of the gamelan he had heard at the 1889 Exposition; or indeed the very opening of the first movement, where an initially impassioned modal statement simply runs out of steam by the twelfth bar, to be succeeded by an apparently unrelated theme in a quite different mood. Chausson’s view was that Debussy did not roll up his sleeves and really get to work on his material—a similar response to that from Vincent d’Indy, who later told Georges Auric that both the Debussy and Ravel quartets were no more than ‘jolis morceaux pour quatuor à cordes’.

But then Debussy always resisted orthodox ‘development’ of his ideas, much preferring to exercise a looser ‘fantaisie’ through free variation, as in the transformations of the Quartet’s opening theme, which itself owes something to the Grieg first String Quartet, also in G minor. To label these transformations ‘cyclic’, in the manner of Franck, is to miss something of the Debussyan essence. The theme does not, for example, culminate in any grand peroration like the one in Franck’s Symphonic Variations, unkindly dubbed by Alfred Cortot ‘l’embourgeoisement du thème’. Debussy’s approach is nearer to Monet’s in recording the variations of light on the façade of Rouen Cathedral. Contemporary critics noted that in the slow movement the Russian influence was alive and well, and it could be that this whiff of exoticism struck Chausson as unpatriotic.