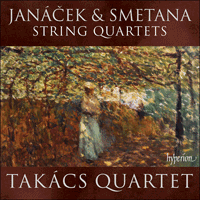 ‘[The Takács Quartet] expertly negotiate the music’s paradoxical demands. On the one hand, there’s the illusion of wild, rasping abandon, a willingness to embrace the rough-grained sound world without inhibition. On the other, not a note seems to be out of place. The musicians handle the harsh gear-shifts with flawless rhythmic control’ (Gramophone)
‘It's hard not to be impressed, emotionally as well as intellectually, especially when it's all so clearly and intimately recorded’ (BBC Music Magazine)» More

‘This disc stands up to all the competition … it is the quality and character from each individual player, even when they are blended into a single entity, that once again sets the Takács apart’ (The Guardian)» More

‘The Takács favour richer, darker sonorities than the Pavel Haas, but I could easily live with both’ (The Sunday Times)» More
‘It can be difficult to find space to let this music speak when Janáček’s mind is darting so restlessly from thought to thought, but the Takács players know its every twist and turn, and the result is like being caught in an irresistible eddy of emotions’ (Financial Times)» More

‘The performances of both works here are all that you could want them to be’ (The Whole Note, Canada)» More
‘The Takács never take a work into the studio without having something meaningful to say, and that's the case with repertoire from Beethoven and Schubert to the two great Czech masters here … the Takács's Janáček is a must-hear’ (Sinfini Music)» More

Nationalism is a public business. During the Czech National Revival of the nineteenth century, communal statements were key. The Czech language was to be spoken, printed and disseminated as widely as possible, while musical, literary and visual culture was to be celebrated on a grand scale, all with the aim of establishing a distinct identity for the peoples of Bohemia and Moravia. Both Bedřich Smetana, the father of Czech music, and Leoš Janáček, its brilliant Brno-based maverick, were proponents of this specifically vernacular culture. And yet, in their string quartets, they pursued more private narratives, all the while maintaining key elements of the language they had fashioned for the public sphere.

While Smetana was completing Má vlast, he embarked on the first of a pair of string quartets. Inverting the extrovert sentiment of his popular orchestral poems, as well as his ever-present operas, ‘Z mého života’ (‘From my life’) is a markedly intimate work, ‘purposely written for four instruments which, as in a small circle of friends, talk among themselves about what has oppressed me so significantly’. But given that Ludevít Procházka’s Czech-German Chamber Music Society prompted Smetana to write the quartet, the composer would have known from the outset that his private thoughts would soon be heard in public. Writing to another friend, the musicologist Josef Srb-Debrnov, Smetana detailed what he hoped to achieve:

My intention was to paint a tone picture of my life. The first movement depicts my youthful leanings towards art, a Romantic atmosphere, the inexpressible yearning for something I could neither express nor define, and also a kind of warning of my future misfortune. The long persistent note in the finale owes its origin to this. It is the fateful ringing of the high-pitched tones in my ears, which, in 1874, announced the beginning of my deafness. I allow myself this small joke, though [my loss of hearing] was ultimately disastrous.

The second movement, a quasi-polka, recalls the joyful days of my youth when I composed dance tunes and was widely known as a passionate lover of dancing.

The third movement (the one which, in the opinion of the gentlemen who play this quartet, is unperformable) reminds me of the happiness of my first love, the girl who later became my first wife [and whom Smetana sadly lost to tuberculosis].

The fourth movement describes my discovery that I could incorporate national elements in my music and my joy in following this path until it was terminated by the onset of my deafness, the outlook into a sad future, the tiny rays of hope of recovery; but remembering the promise of my early career, a feeling of painful regret.

There can be no doubting Smetana’s sincerity. Having sought wider recognition, he eventually established a reputation through the Czech National Revival, becoming its most vocal musical devotee. His deafness, however, consigned him to an increasingly hermitic existence and the sudden interruption of the vivaciousness of the finale to his first string quartet offers an eloquent depiction of creativity cut down. The melancholy (if somewhat consoled) lullaby that follows, with its whispers of past glories, tells of Smetana’s painful submission to his fate, as well as portending something of the dementia that was to dog his final years.

In 1924, forty years after Smetana’s death, Janáček wrote with amazement to his friend Max Brod about how the composer had continued to write ‘during that illness of his’. The same year, which also marked the 100th anniversary of Smetana’s birth, Janáček contributed a commemorative article to Lidové noviny, the Brno newspaper, telling how ‘each work of his reaches the horizon and the ceiling of its subject. It’s impossible to go higher or broader.’ Such sentiments, coming from a composer who had always felt a stronger kinship to Dvořák, testify to Smetana’s lasting appeal.

Unlike both of his Bohemian counterparts, however, Janáček often looked further east for his literary and musical inspiration. Evidence of his pan-Slavism is found in the String Quartet No 1, ‘after Tolstoy’s Kreutzer Sonata’, a novella initially banned by the Tsarist authorities but which Janáček owned in a (highly annotated) Russian edition from 1900. Tolstoy was one of the Moravian composer’s lodestars and he had previously thought of adapting both Anna Karenina and The living corpse for the operatic stage. The Kreutzer Sonata, a tale of an unhappy marriage in which a wife has an affair with a violinist with whom she is playing Beethoven’s eponymous Sonata, had first inspired Janáček in 1908, when he completed a piano trio based on the subject. The trio had its premiere in Brno on 8 April 1909, belatedly marking the Russian author’s eightieth birthday.

Janáček returned to Tolstoy’s story and to his piano trio in 1923, when, during a trip to Prague, the Czech Quartet asked him to write a new work for them. Given that Janáček appears to have destroyed the manuscript of the piano trio (which was never published), we cannot be certain to what extent the new string quartet, completed that autumn, relied on pre-existing material, though it has been shown, thanks to a surviving sketch for the 1908–9 piano trio, that both works quote, fittingly and evocatively, from the first movement of Beethoven’s ‘Kreutzer’ Sonata. But it is the dark mood of Tolstoy’s novella, with the husband stabbing his adulterous wife, that pervades Janáček’s manifestly dramatic work. Pitting violent motifs against more heartfelt lyricism, Janáček creates a series of confrontations, as if between husband, represented by the former, and wife, described by the latter. ‘I was imagining a poor woman, tormented and run down, just like the one the Russian writer Tolstoy describes in his Kreutzer Sonata’, the composer wrote to his friend and muse, Kamila Stösslová.

Janáček had first met Stösslová in 1917 at the Moravian spa town of Luhačovice. Theirs was to be a unique and intense friendship, coinciding with the belated launch of Janáček’s career, thanks to the successful 1916 Prague premiere of his 1904 opera Jenůfa, and the formation of an independent Czechoslovakia and the collapse of the Austro-Hungarian Empire after the end of World War I. Over the ensuing decade Stösslová dutifully maintained her relationship with her antique-dealer husband, though Janáček, estranged from his long-suffering wife, developed an avid fascination with Stösslová, to whom he wrote hundreds of letters until his death in August 1928.

Seeking (and often finding) parallels for his muse in the works he wrote during that last decade of unbridled inspiration, Janáček decided, in January 1928, to compose a second string quartet, which, like the first, has at its heart an unspoken but significant extra-musical programme. Originally entitled ‘Milostné dopisy’ (‘Love letters’), the String Quartet No 2 was eventually given the subtitle of ‘Listy důvěrné’ (‘Intimate letters’), implying the vast correspondence the couple shared, sometimes writing many times in the same day. ‘You stand behind every note’, Janáček confessed to Stösslová, ‘you, living, forceful, loving. The fragrance of your body, the glow of your kisses—no, really of mine. Those notes of mine kiss all of you. They call for you passionately.’

Each of the movements represents a real or imagined landmark in Janáček’s relationship with Stösslová. ‘I think that it will sound delightful’, he wrote to her. ‘There have already been so many of those dear adventures of ours, haven’t there? They’ll be little fires in my soul and they’ll set it ablaze with the most beautiful melodies.’ The second movement, he said, ‘will flare up in the Luhačovice heat’. About the Moderato he wrote: ‘Today I was successful with that movement, “When the earth trembled”. It will be the best. Ah, that was an amazingly beautiful time! And it was true. Only the most beautiful melodies can find a place in it. I just hope I can bring off the last movement.’ But even the decidedly idealistic Janáček was aware that these events were only imaginings and, writing about the finale later in February 1928, he said that it ‘doesn’t sound fearful about my nice little weasel, but with a great longing—and as if it were fulfilled. I’m curious about what effect it will have.’

Further intensifying the language of the first string quartet, Janáček pushes his players (originally the Moravian Quartet) to the limit. The writing, as in his Tolstoy-inspired work, is often highly lyrical, though again it has an unmistakably coarse grain, with the quartet playing right on the bridge, creating severe or wispy sounds, as well as employing other innovative effects. These textural contrasts and Janáček’s forcefully reiterated ostinatos generate a feeling of continual commotion. Even the viola’s folk-like melody at the beginning of the second movement is underpinned by a nervous trill (another recurrent motif in the course of the work). The third movement imitates dance forms, but these too have a surprisingly petulant streak, before doubt and introspection threaten to cloud the last movement, describing Janáček’s ‘great longing’. Although he said that it was to sound as if his yearning for Kamila had been fulfilled, the music is more mysterious, with that hoped-for embrace remaining just out of reach. For even if the goals of the Czech National Revival had been accomplished with the establishment of an independent Czechoslovakia in 1918, the composers who had provided generations of Bohemians and Moravians with their distinct musical voice unsurprisingly harboured more private objectives.