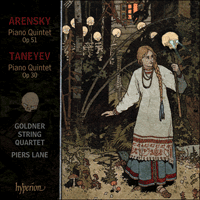 Taneyev has been known as the ‘Russian Brahms’ and this epithet is particularly apposite when considering his Piano Quintet in G minor, especially as regards both its instrumental writing and its intellectual passion. Composed in 1911, this massive work bids fair for the accolade of the greatest work in the Russian piano-chamber repertoire before Shostakovich’s Piano Quintet of 1940. Only the extravagance of its technical demands can explain its failure to establish itself in the standard repertoire.

Arensky’s Piano Quintet of 1900 is less monumental and less flamboyant, though not exactly short of fireworks, especially in the piano writing. It is a deeply attractive and enjoyable work—and equally little-known on the concert platform.

‘Taneyev's Piano Quintet is an expansive work, warmly played here and with the subtle intelligence he demanded of himself when planning a work … Arensky's Quintet has the lightness of touch that he admired in Tchaikovsky … the piano-writing is deft and delicate, excellently handled by Piers Lane and well balanced with the strings in the recording’ (Gramophone)
‘The elevated intelligence and romantic intensity of Taneyev's writing, laid out here on an almost epic scale, are amply reflected by Piers Lane and the Goldner Quartet, as is Arensky's blend of rigour, ardour and charm’ (The Daily Telegraph)
‘Here is yet another fabulous performance of unfamiliar repertory to grace the remarkable Hyperion catalogue … this is a work which has been neglected for too long. As David Fanning writes, 'this massive work bids fair for the accolade of the greatest work in the Russian chamber repertoire before Shostakovich's Piano Quintet' … the approach of the Goldners reveals true chamber music-making of intimacy, and of no less intensity. Lane, meanwhile, is every bit as virtuosic as Pletnev … these are fascinating works and the performances are suitably brilliant. Highly recommended’ (International Record Review)
‘Rich in romantic melody … these are well-realised performances, and in realistic sound. Clearly music which should be heard more in concert programmes’ (Liverpool Daily Post)

Chamber music in nineteenth-century Russia is generally regarded as having taken a back seat, at least by comparison with opera, symphony and song, and by comparison with trends in Western and Central Europe. It is true that nationalist agendas were harder to pursue in this area, associated as it was with the aristocratic elegance of Haydn and Mozart, the elevated philosophy of Beethoven, or the middle-class solidity of his Germanic followers. But nationalism was not the only game in town. From 1859 the Rubinstein brothers—Anton and Nikolay—embarked on a programme of professionalization of Russian musical life, which for them inevitably meant a strong degree of Germanization. Their project encompassed both composition and performance, and its foundations were the concert series and conservatoires they established in St Petersburg and Moscow. Anton’s energies, though perhaps not his gifts, were more or less equally spread across composing, performing, conducting, teaching and organizing. Chamber music, including two piano quintets (one with wind instruments), features strongly in his compendious output. Much of it was admittedly designed in the first instance for publication and performance abroad. Even so, where he had pointed, many in the next two generations followed.

Born around the time the Rubinsteins were unveiling their project, Anton Arensky and Sergei Taneyev were destined to be remembered more as teachers than as composers. Both were based at the Moscow Conservatoire, where Taneyev served as director from 1885 to 1889. Both wrote influential theoretical treatises—Arensky on harmony, Taneyev on counterpoint. Both were considerable pianists—Taneyev especially so—and Arensky held significant posts as conductor. Though a Rimsky-Korsakov pupil, Arensky fell under the spell of Tchaikovsky, rather to the chagrin of his former teacher, who went on to suggest that he would soon be forgotten. Taneyev, by contrast, was one of the very few successful composers actually taught by Tchaikovsky, whose views he was not afraid occasionally to challenge (their correspondence is a rich exchange of ideas, still awaiting translation). Tchaikovsky’s imposing Piano Trio of 1881–2 is a crucial link in the chain between Anton Rubinstein’s piano-chamber music and that of the two composers on the present recording. Taneyev actually had the temerity to show Tchaikovsky how the fugal variation in the second movement of that work could have been composed differently.

Temperamentally Arensky and Taneyev were poles apart. Rimsky-Korsakov’s memoirs describe Arensky’s early life as having ‘run a dissipated course between wine and card-playing’, and noted that on his move to St Petersburg in 1894 to succeed Balakirev as director of the Imperial Chapel ‘the same mode of life continued, though on a reduced scale’. His health undermined, Arensky died at the age of forty-four, from tuberculosis. Taneyev, on the other hand, was that rarest of things in Russian music, a teetotaller, as well as a confirmed bachelor who would ask his house guests to step outside if they wished to smoke, and an intellectual with interests encompassing the ancient Greeks and Esperanto. He held Arensky in high esteem, and Rimsky-Korsakov’s son Andrey recalled Taneyev and his father in December 1906 arguing over the recently deceased Arensky’s merits as a composer. In 1915 Taneyev attended the funeral of his former pupil Scriabin, where he contracted pneumonia, dying of a heart attack soon afterwards.

As a composer Taneyev’s reputation has suffered from the knee-jerk association of contrapuntal mastery with expressive dryness. It is true that he took an architectural approach to large-scale form, working from a vision of the overall proportions down to the details. It is also the case that he was in the habit of systematically investigating the combinatorial possibilities of his themes before committing himself to the act of composition itself. He was also extremely self-critical, approving only one of his four symphonies for publication, for instance. But in his chamber music especially (notably his nine string quartets) there is a warmth to the lyricism, an energy to the fast movements, and a charm to the scherzos, that belie his reputation for intellectual aloofness. The often-used epithet ‘the Russian Brahms’ (also applied to Medtner) deserves to be pronounced with admiration rather than with a sneer, and it fits the Piano Quintet particularly well, as regards both its instrumental writing and its intellectual passion. Composed in 1911, this massive work bids fair for the accolade of the greatest work in the Russian piano-chamber repertoire before Shostakovich’s Piano Quintet of 1940. Only the extravagance of its technical demands can explain its failure to establish itself in the standard repertoire.

The first movement is prefaced by a dark, searching introduction, all of whose ideas will eventually be stirred into the melting-pot of the Allegro patetico. The shadowy theme heard at the outset on the piano (emulated by Prokofiev more than thirty years later, in one of his darkest and most impressive works, the First Violin Sonata) transmutes into the main theme of the movement. It also engenders the main contrasting idea, when, as if by magic, its descending contour is inverted to reveal a nobly aspiring tune. Both thematic groups are led off by the piano, as is the development section (beginning ‘stormily’, after a pizzicato cadence for the strings). Waves of compositional and instrumental virtuosity culminate in a recapitulation that allocates the aspiring theme to the cello and is unremitting in its technical demands on the pianist.

The charm of the effervescent Scherzo rests most obviously on the bouncing staccatos for the strings, but more subtly also on the harmonic deflections in the main theme and in the various circuitous routes Taneyev devises in order to get back to the home key. Not least among the challenges to the pianist in this movement are the scales that lead into the main theme. Initially unobtrusive, these grow on each appearance, eventually covering most of the instrument’s range. Sandwiched in the middle of the movement is a warm-hearted trio section, whose opening bars briefly reappear as a kind of parenthesis in the headlong coda.

Smuggled into that coda is a descending scalic figure that will become the foundation of the Largo, a slow movement of almost Handelian stateliness. This theme is presented in statuesque octaves at the outset, then becomes the support for a lyrical flowering in the strings that seems determined to find freedom of movement despite the stubborn repetitions in the cello. The entire Largo unfolds as a dialogue: not just between piano and strings but also on a more philosophical level, between intellectual severity and expressive warmth.

If the slow movement is a tour de force of construction, so too is the Finale. Its first half is in a constant state of flux, almost as though an entire exposition section has been deleted and we have been plunged instead straight into the development. At length the first movement’s main ideas are caught up in the maelstrom, provoking a grandiose climax. Even this, however, is only the beginning of a coda that is laid out on the grandest scale and topped off by a tintinnabulating affirmation of the long-withheld G major.

Arensky’s Piano Quintet of 1900 is less monumental and less flamboyant, though not exactly short of fireworks, especially in the piano writing. That it should be so much less well known than his two piano trios and his two string quartets (the second of which is for the unusual ensemble of violin, viola and two cellos) may seem surprising in view of the élan of the first movement. This launches itself in full sail, with bold chords on the piano and a sweeping theme on the strings that seems capable of weathering all possible storms. Before long the piano is indulging in luxuriant elaborations, but these never obscure the music’s fundamental tone of generous warmth. Various echoes of the Germanic piano-chamber repertoire are heard (notably Brahms’s G minor Quartet in the development section), and British ears may detect some coincidental pre-echoes of Elgar’s Piano Quintet.

The theme of the slow movement variations is the old French wedding song ‘Sur les ponts d’Avignon j’ai ouï chanter la belle’ (a different tune and words from ‘Sur le pont d’Avignon, on y danse’, which generations of British and French children have learned at school but which only appeared in the 1850s). In some of its melodic turns the theme actually resembles the Russian folksong used by Tchaikovsky in String Quartet No 1, or indeed Tchaikovsky’s Legend (from the Children’s Songs Op 54), so delightfully varied by Arensky in his String Quartet No 2. The alternately stormy and reflective variations are resourceful and engaging, perhaps the most memorable transformation being the graceful waltz—an Arenskian speciality.

As so often in Russian instrumental music, the Scherzo is bubbly and capricious in a post-Mendelssohnian way, though not as fairy-light, with much use of bouncy repeated-note chords in the piano, while the trio section is marked by graceful parallel-motion chords.

The Finale opens in Neo-Bachian vein (in modo antico, as the score has it). Arensky taught fugue as well as harmony at the Conservatoire, his students there including the young Rachmaninov, who found the classes unbearably dry and was relieved when Taneyev took over the class. As if to tell us not to take this display of scholasticism too seriously, Arensky suddenly puts a stop to it. The strings recall the second movement’s French chanson, itself now treated quasi-fugally. This in turn leads back to the main first movement theme. Far from this heralding a grand résumé, however, the conclusion is soon upon us. Its somewhat tacked-on quality surely has to take part of the blame for the Quintet’s relative lack of popularity—such a shame, considering the attractiveness of so much of the preceding music.