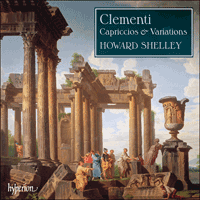 Howard Shelley’s survey of the complete piano sonatas of Clementi was acclaimed not only as a set of benchmark performances, but also as the rediscovery of a composer who was uniquely important in his lifetime, which overlapped the careers of Scarlatti and Chopin. This set of Capriccios and Variations is something of a footnote to the series. The earlier works demonstrate Clementi’s lighter and more whimsical side. Most of this music was written to entertain and amuse, with many fantastical virtuoso flourishes of an improvisatory feel. The later works date from the nineteenth century, when Clementi was not quite as prolific as his younger self. Although many of these works, too, were designed for domestic use, there are exceptions such as the Two Capriccios Op 47. These are clearly ‘professional’ music: ambitious, dramatic, radically experimental, often determinedly chromatic, they show the septuagenarian composer still at work in the forefront of the most modern keyboard style.

Howard Shelley has made this repertoire his own. He performs with his usual impeccably stylish flair.

‘This enticing seventh (and final) volume of Clementi's works for solo piano is a notable achievement on several levels. The same team … have combined to produce no fewer than 14 CDs of remarkably uniform quality, insight and interest in a mere 4 years … there are over 152 minutes of music on the present discs, much of it demanding. How Shelley manages to absorb it all and then convince you that he has been playing it all his life with his characteristic elegance and dexterity is a gift given to few. Such an eminent composer deserves no less’ (Gramophone)

Late in life Muzio Clementi (1752–1832) accurately observed: ‘I was a young Italian, but now I’m an old Englishman.’ He was born of humble parentage in Rome, was taken to England at the age of thirteen by one Peter Beckford (cousin of William Beckford, the Gothic novelist), and essentially remained there for the rest of his long life. While he had received attentive musical instruction as a boy in Rome, and had got a good early start as a composer there, during his seven years at Beckford’s rural estate in Dorset he was on his own. He evidently used his time there to good advantage, practising the works for harpsichord of Domenico Scarlatti, Handel, and Domenico Paradies so assiduously as to become, in the opinion of many, the finest keyboard player of his era.

When at the end of 1774 or early 1775 Clementi left Dorset to plunge into the tumultuous musical scene in London, he was only one of a host of Italian and German musicians there who competed for the public’s attention. Keyboard players, it was expected, would perform mainly their own music. Clementi had few compositions to his credit before the move—he had published only his Sonatas Op 1—and London newspapers hardly noticed him during his first couple of years in the city. It was not until 1779, with the publication of the startlingly virtuoso Sonatas Op 2 (see Hyperion CDA67632) that he was to attract much notice.

But in the meantime, in 1777, his first publication of the London years appeared: ‘The Black Joke, with 21 Variations … composed by Sigr. M. C.’. It is hard to imagine why Clementi should have wished to remain semi-anonymous, for these variations certainly include some of his most attractive music to date. The ‘Black Joke’ is a jig-like Irish folk tune which Clementi presents with a stark single-line accompaniment featuring bits of a tonic pedal-point suggestive of a drone. The variations that follow amount to a kind of anthology of keyboard figurations, some of which—like the fast runs in octaves in variations 10 and 20—were later to make Clementi famous. Patterns of repetition among the minor-key variations (14–15–14, 16–17–16) lend these groupings a certain autonomy as miniature ternary shapes. The final variation is a virtuoso tour de force, with octave figurations in both hands enlivened with poignant chromatic inflections.

A decade later Clementi was well established in London musical life, participating alternately, as both composer and performer, in the Hanover Square Concerts and its principal rival, the La Mara–Solomon series. His role in these concerts was varied: he sometimes played his solo sonatas (performing solo sonatas at public concerts was usual only in England); he occasionally played in small ensembles; or he presided at the keyboard for performances of his symphonies (conducting from the keyboard, a remnant of the old basso-continuo practice, was also at this time a lingering English speciality).

In the mid-1780s he published a series of impressive, stylistically advanced solo sonatas (Opp 11–13), which were surely among those he had been playing in concert. In 1786–7 he also issued three individual compositions for solo piano: La chasse Op 16, the Op 17 Capriccio, and Musical Characteristics Op 19. La chasse is in effect a three-movement sonata with hints of hunting-horn motifs in the outer Allegros; the writing here, thin-textured and harmonically straightforward, is fairly standard for its time, but the effect can be exhilarating, particularly at Mr Shelley’s brisk tempos. The Capriccio Op 17, a single-movement piece with variations on two current songs from the London stage, is also ingratiating music—bright, transparent, and not particularly demanding for either player or listener.

Musical Characteristics is a whimsical collection of ‘preludes and cadences’, as the original title has it, in the styles of six different composers, including Clementi himself. The ‘cadences’ (i.e. cadenzas), tiny fragmentary improvisations, are not included in this recording. Preludes—bits of preparatory playing before a performance—were also expected to sound improvisatory. (When reporting to his father on the celebrated piano contest with Clementi in 1781, Mozart mentioned that both pianists ‘praeludierte’ before playing their prepared selections.) These brief Preludes are capricious things, laden with passagework, and interrupted with constant changes in texture and tempo.

It is not entirely clear what Clementi had in mind here: are these fragments meant as serious imitations, perhaps as a handy crib for amateur pianists who had trouble improvising their own preludes and cadenzas? Or are they to be taken as parodies? Both interpretations may have something to be said for them. The Haydn imitations sound at points rather like Haydn (the second one seems to refer to Haydn’s recent C major Sonata, Hob XVI:20), and the Mozart ones, too, seem to be respectful imitations. But the Preludes ‘alla Sterkel’ surely reveal a parodic intent. The music of the German pianist Franz Xaver Sterkel (1750–1817), sometimes described as a bit saccharine, is lampooned with a plethora of performance directions such as calando and con espressione; one four-bar phrase is even marked allegretto dolce e con molta espressione. But Clementi seems at his best when imitating himself. The second Prelude ‘alla Clementi’ is a sparkling little virtuoso fantasy with the brilliant broken octaves and passages in thirds that were seen as his trademarks.

The two Capriccios Op 34 of 1795 are not at all like their modest predecessor, Op 17. The new Capriccios leave the impression of impassioned, whimsical improvisations abounding in various kinds of wide-ranging virtuoso passagework, much of it rather indeterminate in harmony. In the midst of this Clementi now and then interposes starkly contrasting bits of simple melody, served up with the sort of grandiloquent introductory gestures that were to become a staple commodity of nineteenth-century piano virtuosi.

With the exception of the rather slight variations on ‘Minuetto a Tempo di Ballo’, WO5 of 1793, all the remaining music of these two discs was composed in the nineteenth century. For Clementi the turn of the new century was marked by a new preoccupation: in 1798 he had entered into partnership in a firm that published music and manufactured pianos. For the rest of his career, Clementi was generally known, first of all, as a successful businessman, and only secondarily as a practising musician. From 1802 to 1810 he toured the European Continent, from Russia to Italy, to promote his company’s products. His production of new music, understandably enough, slowed dramatically.

In Vienna, an early stop on his long trip, he arranged with the firm Artaria for the publication of his Rondo in B flat major WO8. This is simply a reworked version of a very old sonata movement of his that had first appeared in 1779—from Op 2 No 5. The music abounds in the fast parallel thirds and octaves that were the earmarks of that bygone time in Clementi’s career.

The remainder of the music recorded here dates from 1820–21. The variations based on Zerlina’s little aria in Don Giovanni, ‘Batti batti, o bel Masetto’, WO10, first appeared in a collection of operatic arias transcribed for piano, ‘with an Introductory Movement to Each by the most Eminent authors’, put out by Clementi’s company. His own ‘introductory movement’ anticipates a flood of similar works by the piano virtuosi of the 1830s and 1840s: a florid, rhapsodic fantasy laced with tantalizing hints of the melody to come, which at last is presented in an effective piano transcription that preserves a good bit of the original orchestral accompaniment. This is essentially parlour music, the sort of thing advanced amateur pianists might play for friends at home. The same may be said for the Fantaisie and Variations Op 48, on the well-known French folk tune (already well known by the mid-eighteenth century) ‘Au clair de la lune’. Again, an improvisational fantasy with great flourish introduces the unadorned melody, which this time is followed by a dozen rather inventive variations.

The original title page of the Twelve Monferrinas Op 49 explains that ‘a monferrina is a dance peculiar to the state of Monferrato’. These are graceful little pieces, each two pages in length. All are in 6/8 metre, beginning with an upbeat of half a bar; all present contrasting material in a nearby tonality; and nearly all have a transparent two-part texture—the one exception being the fourth, where Clementi indulges in the thicker writing and chromatic ornament more usual in his music of this period.

In his later years Clementi continued to make frequent trips to Europe. When in the autumn of 1827 he finally returned to England for good, the leading musicians of London, including Sir George Smart, J B Cramer, and Ignaz Moscheles, staged an elaborate banquet in his honour. The pianists present performed a variety of his compositions, ranging from the early Op 2 Sonatas to his most recent works. The eminent English pianist Cipriani Potter, professor of piano at the Royal Academy of Music, played one of Clementi’s final two Capriccios, Op 47. These are clearly ‘professional’ music: ambitious, dramatic, radically experimental, often determinedly chromatic, they show the septuagenarian composer still at work in the forefront of the most modern keyboard style. Each of the two Capriccios (in E minor and C major) consists of two fast movements, in every case preceded by a sizable Adagio introduction. These Adagios, with their elaborate melodic ornament and luxuriant chromaticism, at points may remind us of piano music from a dozen years later: Chopin, perhaps, or the young Liszt. The first Adagio of the C major Capriccio has a 5/4 time signature—perhaps the first occurrence of such a radically experimental metrical arrangement. The initial fast movements in each Capriccio are both of the appassionato type, with dramatic, agitated themes, and laden with chromatic motion and enharmonic shifts. The two finales are rather different: their largely straightforward construction and diatonic harmonies have a retrospective air, as if Clementi were for a moment indulging in a backward glance at his own musical past.