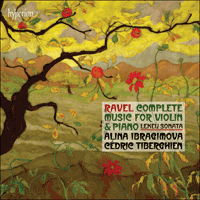 Maurice Ravel’s mature works for violin and piano have established a central place in the core recital repertoire and are considered among the most popular of the genre. These diverse works acknowledge the influences of a range of musical styles from jazz to Impressionism and fuse the tonal colours of Debussy with the lyricism of Franck.

The posthumously published one-movement Violin Sonata, written by Ravel as a student, is a lyrical precursor to the composer’s stunning Violin Sonata in G major with its unique character and adoption of the ‘blues’ idiom. The spontaneity, tonal colours and exotic soundscapes in Ravel’s violin music call for immense skill in interpretation, and passages in the frenzied Tzigane test the limits of the performers’ virtuosity.

Violinist Alina Ibragmiova rises to these challenges with extraordinary verve. Recent winner of the Royal Philharmonic Society’s prestigious ‘Young Artist of the Year’ award, she displays a vast expressive range and interpretative maturity. She is accompanied by pianist Cédric Tiberghien, who gives elegant and flawless performances and relishes Ravel’s iridescent piano parts.

The addition of Guillaume Lekeu’s masterwork, the extensive and engaging Violin Sonata, makes this major new release a chamber disc to treasure.

‘The instinctive artistic collaboration between Alina Ibragimova and Cédric Tiberghien … is again brought to the fore in this perceptive and magically played programme of French chamber music … they have great fun with the wild gipsy flair of Tzigane, but you can tell that this spontaneity is born of deep understanding of the music’s character and of unshakeable rapport. In the entire programme the playing is of finesse and winning, communicative allure’ (The Daily Telegraph)
‘Just under their ease of delivery lie fire and muscle; and their dynamics and touch modulate even more than the music's keys. Ibragimova is especially adorable in the slow movement, tumbling gracefully, high in the air, through a melody that never seems to end … the best is yet to come. In the G major sonata's first movement Tiberghien stabs while Ibragimova soars, the contrast between them deliberately underlined, the better to generate extra power whenever they intertwine. The central blues movement is magnificently judged building up from coquettish whispers toward the darkly brazen … a triumph’ (The Times)
‘Ibragimova’s tone is taut, sweet and astringent, but with plenty of power in her bowing arm … while Tiberghien’s limpid touch and easy bravura are perfect for this music. The lovely central movement, très lent, is Lekeu’s masterpiece, done with exquisite intensity here … Ibragimova and Tiberghien do it proud’ (The Sunday Times)
‘This must count as one of the most satisfying surveys of Ravel's complete violin music in the catalogue’ (The Strad)
‘Alina Ibragimova and Cédric Tiberghien possess the rare gift of being able to recreate on disc the same captivating spontaneity and musical intensity that distinguishes their concerts. Rarely have the sleek lines and textures of Ravel's two sonatas sounded so alluring, nor the manic drive of the Tzigane so deliriously intoxicating. Their sublimely articulate and sensitive account of the Lekeu Sonata surpasses even Menuhin's 1938 trailblazer’ (Classic FM Magazine)

At the start of the 1890s, French composers were largely divided into two groups: Conservatoire students who looked to Massenet as their guiding star; and the so-called ‘bande à Franck’ who followed the Belgian master—indeed ‘worshipped’ would not be too strong a word. The music historian Martin Cooper, in his classic account of the period, described Franck’s world as one ‘of tremulous emotion, in which the nobility and purity of master and disciples seems to have been permanently—and one cannot help feeling, rather self-consciously—in evidence’.

Whether innate or in response to Franck’s example, ‘tremulous emotion’ was decidedly a major part of Lekeu’s make-up: visiting Bayreuth in 1889, he fainted after the Prelude to Tristan und Isolde and had to be carried out of the theatre. He confessed to not liking ‘music that is pretty but not felt’ and that ‘for me art is entirely a matter of feeling’. The Violin Sonata, written for the great Belgian virtuoso Eugène Ysaÿe, declares its programme of sentiment from the opening phrase—a bold downward octave followed by an upward scale. If there are echoes of Beethoven, Wagner and, of course, Franck, this is only to be expected of an impressionable twenty-two-year-old. Like Franck, Lekeu in the two outer movements proceeds by continual modulation, binding the music together with cyclic repetitions of material and especially of rhythms: phrases often have their longest note in the middle and end with a triplet. The finale also repeats sixteen bars almost note for note from the first movement during the build-up to the final section.

But perhaps Lekeu’s greatest achievement is to be found in the opening theme of the central slow movement. Not only does he manage the 7/8 (4+3) time signature with consummate flexibility, he keeps our interest through all forty bars and three minutes of the melody with only two brief excursions away from the tonic E flat major. The central section is introduced by a tune on the piano played ‘very simply and with the feeling of a popular song’. In this, Lekeu was following not so much Franck himself, as members of the bande such as d’Indy, for whom folksong was the epitome of nobility and purity.

In June 1895, the twenty-year-old Maurice Ravel’s Conservatoire professor Émile Pessard described his harmony exercises as ‘exact’—Pessard lived on until 1917, perhaps long enough to blush at this judgment. At all events, in the exam in the summer of 1895 these exercises weren’t exact enough for the jury and Ravel had to leave the institution, before returning as a member of Fauré’s composition class in January 1898. In the meantime, he began a Violin Sonata in A major, but got no further than the first movement. This information comes from a note he sent to the violinist Paul Oberdoerffer in June 1929, consisting of the opening violin phrase and a dedication to him ‘in memory of the 1st performance of the uncompleted first sonata (18…)’. Oberdoerffer went on to teach violin at the Conservatoire and wrote light music for his instrument with titles such as Chinoiserie and La petite fleur de mon jardin. Ravel’s single movement, in sonata form, juxtaposes modal writing, as at the opening, with more chromatic harmonies, including two passages of downward sliding chords that sound like Delius. The joins may not always be totally convincing, but there is no mistaking Ravel’s way with a lyrical idea.

From his arrival in Fauré’s class until that composer’s death in 1924, Ravel remained on friendly terms with his teacher, even though his music shows barely any Fauréan influence other than a distaste for loquacity. When the journalist Henry Prunières was planning a Fauré number of his Revue musicale in October 1922, Ravel joined six other pupils in providing a musical homage. Fauré had been let in on the idea and had suggested a theme drawn from his music to Prométhée, but in the end his pupils chose a musical transliteration of the name Gabriel Fauré: GABDBEE FAGDE. Ravel’s Berceuse has an unassuming grace worthy of its dedicatee, and its contrasts, as in the early Sonata movement, are largely between modal and chromatic harmonies. The score is marked semplice and the violin is muted throughout.

Also in 1922, Ravel began work on a violin piece that could hardly have been more different. At the end of June he went to London with the pianist Robert Casadesus and his wife Gaby to make some recordings for the Aeolian company. He was also able to hear the first British performance of his Duo for violin and cello in which the violinist was the Hungarian Jelly d’Arányi. Afterwards, he got d’Arányi to play him some gypsy folk music and, according to Gaby: ‘D’Arányi, being Hungarian, didn’t need to be asked twice and played passionately for at least two hours without stopping. She was sensational and Ravel was mad with joy … very shortly afterwards Tzigane was born.’ D’Arányi gave the first performance in April 1924 in London. The piece adopts the slow/fast (lassú/friss) form of the csárdás, the slow section being for violin alone. In imitating the gypsy style—harmonics, trills, glissandos, appoggiaturas, hesitations and passages in high positions on the lower strings—Ravel may have left something of himself behind, but as pastiche it is undeniably brilliant, drawing some of its ideas from Liszt’s Hungarian Rhapsodies and Paganini’s Caprices. When d’Arányi was rehearsing for a performance with orchestra in Paris that November, she is said to have introduced what she called a ‘glissando with trills’. Ravel supposedly confided to a friend, ‘I don’t know what she’s doing, but I like it.’

Ravel’s time as a lorry driver during World War I had undoubtedly undermined his health, and for the last twenty years of his life insomnia was a persistent problem. Also, in 1917 his mother had died, and many friends were of the opinion that he never fully recovered from this either. These factors contributed to make composition during these years a laborious business, and with no work more so than the Violin Sonata in G major. Begun in 1923, it was set aside for other compositions such as Tzigane and the opera L’Enfant et les sortilèges, and was not completed for another four years. As late as 1926, Ravel’s pupil Manuel Rosenthal saw pieces of manuscript burning in the grate. It was the finale of the Violin Sonata, which he had liked. ‘Yes,’ said Ravel, ‘I too liked it very much. But it didn’t fit the Sonata.’

He claimed that he was trying in the work to point up the essential incompatibility of the two instruments. In the first movement, violin and piano do share material, but the first theme, for instance, is so obviously better suited to the violin that its initial presentation by the piano only emphasizes the incompatibility. The violinist Hélène Jourdan-Morhange, to whom the Sonata is dedicated, felt that the violin was treated more like a woodwind instrument, while the piano, at least in the composer’s hands, sounded dry and percussive.

In the central ‘Blues’, Ravel takes over from where he left off in Tzigane, with glissandos, complex ornaments, and high string positions to imitate the characteristically husky tone of the African voice. One critic has even found detailed borrowings from Jelly Roll Morton’s Black Bottom Stomp. In the final ‘Perpetuum mobile’, once the violin is hooked on its semiquavers, there is no holding it, and we sense the implacable, dark side of the ‘Silly Twenties’, as pictured elsewhere by Ravel in La valse and Boléro. We may seem to have come a long way from the ideals of nobility and purity that informed the world of César Franck. But in the ‘Blues’, and at times in the first movement, we may sense a tender vulnerability that Ravel had rarely allowed to rise to the surface. If he could not, like Lekeu, wear his heart on his sleeve, maybe this enabled him to sympathize with African music in a shared interiorization of feeling; and maybe that is why every performance of this Sonata tends to come up with something new, and surprising.