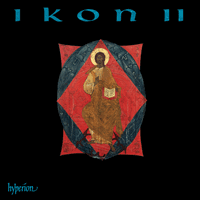 In 1997, the Holst Singers and Stephen Layton produced a disc that immediately became a cult classic and a best-seller. ‘Ikon’, a selection of great Russian choral music from the 19th century, dazzled with its grand, opulent beauty. Now the same forces return with Ikon II. Many of the works recorded here are by composers whose names will not be familiar—but the extraordinary quality of the music is unmistakable and immediately enthralling.

‘The programme is scrupulously prepared, with excellent pronunciation, idiomatic timbres and a fine fusion of ardent communication and sensitive shaping. The disc was recorded in the superb acoustic of All Hallows, Gospel Oak, London, and Ivan Moody's informative essay is an indispensable bonus’ (Gramophone)
‘In hymns, prayers, invocations and anthems. These composers draw on ancient chant to produce music which is always passionate … beautifully captured by the Holst Singers’ (Choir & Organ)
‘Performing with insight and commendable Russian sonority, the Holst Singers have cast their net wide in this survey of Orthodox Church music. The main focus is the pre-Revolution period of the early 20th century, with Pavel Chesnokov generously represented. But he and other composers found ways of reconciling inventiveness with the Church’s constraints, and such rarities as César Cui’s Magnificat, together with works by Shvedov, Kastalsky and more familiar Rachmaninov, make for a fascinating spectrum’ (The Daily Telegraph)
‘The remarkable performances of the Holst Singers, securely balanced on the tightrope between pianissimo sensitivity and full-throated veneration … the intonation is faultless across all the registers here, diction is clear and the choral sound is beautifully homogenized—there doesn't seem to be a weak voice anywhere. Nor is there a weak piece: all 22 items blaze with devout passion. With the volume turned up, one after another brought up the hair on the back of my neck … this is a glorious CD and it should bring you much pleasure’ (International Record Review)

This recording centres on music produced by a group of composers linked to the Moscow Synodal School of Church Singing, famous for its choir (comprising men and boys) at the beginning of the twentieth century. These composers made, up to the time of the momentous events of 1917, a significant contribution to the future of Russian choral music, one that, while never forgotten in Russia, is now also coming to be appreciated in the West. That their work did not emerge from a vacuum is made evident here by the inclusion of music by earlier composers: Pyotr Tchaikovsky (1840– 1893), Nikolai Rimsky-Korsakov (1844–1908), Mili Balakirev (1837–1910) and César Cui (1835–1918).

In 1879 there occurred a famous incident which would have significant consequences for Russian church music. Pyotr Jürgenson, the Moscow music publisher who frequently worked with the Imperial Chapel, published Tchaikovsky’s Liturgy of St John Chrysostom without the authorization of the Chapel—indispensable since the time of Bortnyans’ky. Bakhmetev, its director, attempted to forbid publication, but Tchaikovksy sought and received authorization from the Senate. Though many have considered the work too ‘Western’, it may be seen as truly Russian in spirit, and marks the end of the period of German domination and the initiation of the study and recovery of the Russian Church’s musical past. Tchaikovsky himself later worked more seriously with the chant repertoire, and his settings for the Vigil show a preoccupation with finding a valid style of genuinely liturgical composition. The present recording includes his arresting setting of Priidite, poklonimsya, followed by the Trisagion (Trisviatoye), from his 1879 Liturgy.

Rimsky-Korsakov was similarly concerned, in many of his remarkable but now rarely performed sacred works, with the heritage of monophonic chant. His simple setting of the Lord’s Prayer is the exception that proves the rule: it is known throughout the Orthodox world and beyond, in its original Slavonic and in many other languages. The names of Balakirev and Cui are less frequently associated with the composition of sacred music. Balakirev, who, like Rimsky-Korsakov, was appointed to the Imperial Court Chapel—he was its administrator from 1883 to 1884—left a mere nine church compositions, though he also wrote Penie pri Arkhiereiskom (Chants for the Archbishop’s Service) which are lost. Da molchit vsyakaya plot is the hymn sung at the Great Entrance (when the celebrant transfers the bread and wine, in procession, from the table of preparation to the altar table) on Holy Saturday. Balakirev’s setting, published in 1900, is built on a Kievan chant, which may be heard in the soprano voice. Cui’s interest in sacred music occurred only towards the end of his life. Pesn’ Presvyatïya Bogoroditsï (Velichit dusha moya Gospoda) is a setting of the Magnificat, which is sung at Matins in the Byzantine rite, and includes the refrain ‘More honourable than the Cherubim and more glorious beyond compare than the Seraphim, […] true Theotokos, we magnify thee’, for which Cui employs a unifying melodic tag. It is a dramatic setting, with nothing specifically Russian in its character (except for the employment of low bass writing), and has more of the concert hall than the church about it, but it is a remarkable conception, with moments of outstanding beauty. The last few minutes of the work are as magnificent as they are unexpected.

The return to Russia’s liturgical and musical heritage had been begun by Prince Vladimir Fyodorovich Odoyevsky (1804–1869), a philosopher, writer, critic and musicologist. He was a founder member of the Russian Musical Society, which played an extremely important role in Russian musical life at the end of the nineteenth century. He was a lover of old music books, and of Znamenny chant manuscripts and prints in particular. Around him he gathered a number of musicians interested in studying chant, including archpriest Razumosvky and Stepan Smolensky—this last numbered among his pupils Kastalsky, Chesnokov and Nikolsky, and it is to Smolensky that Rachmaninov’s Vigil (‘Vespers’) is dedicated. As a composer, Kastalsky (1856–1926) best exemplifies the influence of Smolensky’s work. His music, almost all of it liturgical, is profoundly rooted in various Russian chant repertories, combined with a harmonic language deriving from the modal implications of the chant and from Russian folk tradition, and which he soon went on to develop independently of the citation of actual chant, as his fourth setting of Svete tikhiy, the evening hymn from the service of Vespers, shows. This return to sources was deeply influential on many composers, including Kompaneysky, Tolstiakov, Nikolsky, Grechaninov, and Chesnokov. While it may be considered that Rachmaninov’s monumental Vigil, in large part based on chant, is the ne plus ultra of this development, and is certainly one of the peaks of choral writing in any century, its fame has in the West, until recently, largely overshadowed the achievements of these other composers. Bogoroditse Devo is one of the freely composed movements, and the dramatic colours produced by its suave polyphony and subtle octave doublings (the famous ‘choral orchestration’) show how much the composer learnt from his colleagues associated with the Synodal School.

Nikolay Golovanov (1891–1958) is certainly one of the least known of these composers. He wrote twenty-three sacred works, which were almost the last of their kind to be published before the Revolution in 1917. Stylistically they suggest both Rachmaninov and Kastalsky to some extent, but the elaborate textures of his beautiful setting of the Lord’s Prayer suggest the concert hall rather than the liturgy. After the Revolution, he worked principally as a conductor, at the Bol’shoy and elsewhere.

The sacred output of Pavel Chesnokov (1877–1944) was enormous, numbering over 400 works, which include three settings of the Divine Liturgy and two of the Vigil Service. A substantial proportion of these works makes use of chant, as is the case with Blagoslovi, dushe moya, Gospoda, a calmly radiant setting of verses from the vesperal Psalm, 103, built on the grecheski rospev (Russian ‘Greek’ chant), and Spasenie sodelal, the communion hymn for Fridays, based on a Kievan chant. Other communion hymns from the same Op 25 cycle, such as Dukh Tvoy blagiy, for Pentecost, and Raduytesya, pravednii, o Gospode, for the Feast of the Holy Forefathers, on the other hand, are freely composed, as is Da ispravitsya molitva moya (the Psalm verses appointed for the Liturgy of the Pre-sanctified Gifts), one of Chesnokov’s best-loved works. The latter’s magnificent display of dark choral textures underlining the alto solo (here sung by the full alto section), and the frequent chromatic slips, may be thought to be liturgically unsuitable, but in fact it belongs to a long line of Russian liturgical compositions that also serve as a vehicle for a solo voice, including Rachmaninov’s Blagoslovi, dushe moya, Gospoda and Nyne otpushchaeshi from his Vigil and Grechaninov’s famous Creed, and, like those works, never oversteps the bounds of liturgical propriety. O Tebe raduetsya, a joyous setting of the Hymn to the Mother of God used at the Liturgy of St Basil the Great, effects an impressive compromise between these two procedures, quoting the grecheski rospev melody at the beginning and at a few points subsequently, but being otherwise a free composition.

Viktor Kalinnikov (1870–1927) was the brother of the marginally better-known composer Vasily Kalinnikov, and was for a time on the faculty of the Moscow Synodal School. His sacred output comprises only twenty-four pieces, all of them characteristically resourceful texturally. While Priidite, poklonimsya is quite straightforward, Tebe poem, Op 2, from the anaphora of the Divine Liturgy, surprises with its dramatically dark harmonies, couched within a simple melodic language. Kalinnikov’s second setting of Tebe poem, Op 7, is more spaciously textured. Kalinnikov’s setting of Bogoroditse Devo, the seventeenth of his sacred collection, is particularly interesting—and unusual—in that it is built over two constantly repeating open fifths in the bass voice (A–E and D–A), reminiscent of deep tolling bells. Far from representing any kind of limitation, this structural scaffolding serves as the basis of a remarkably intense work that constantly revisits a few simple melodic gestures, culminating in a splendid opening of the harmony at ‘Spasa rodila’, in the final phrase of the text. Bells are also suggested by the joyous setting of Blagoslovi, dushe moya, Gospoda (the introductory Psalm from Vespers) by Nikolay Tolstiakov (1883–1958), a composer whose output remains largely unexplored and partly unpublished. Apart from the clangorous bell-like motif throughout, the work is notable for its dramatic harmonic shift at the fourth textual phrase, ‘Blagosloven yesi, Gospodi’ and the use of rhythmic triplets at ‘Slava Ti, Gospodi’, which contradict the prevailing rhythmic flow.

Aleksandr Grechaninov (1864–1956) and Konstantin Shvedov (1886–1954) both began their lives in Moscow, studying at the Conservatory there, and ended them in America. Shvedov moved to the United States in 1926 or 1927, and worked as a church choir conductor in Babylon, New York. He was an assiduous collaborator of Sergei Jaroff, conductor of the famous Don Cossack Choir. His work exhibits quite a different compositional stance from the Synodal composers, frequently using elaborate counterpoint and imitative writing. His setting of the Trisagion (Trisviatoye) is built around a wide-ranging melody in the bass part, to which the other voices add their distinctive harmonic colouring. Grechaninov also left Russia in the 1920s, initially moving to Paris in 1925, and settling in the United States in 1939. Though he quoted chant only occasionally, his sacred music has the kind of textural richness associated with Chesnokov and Rachmaninov, but taken a step further, and is unmistakably Russian in sound. His Vecheri Tvoeya taynïya, a setting of the communion hymn for Holy Thursday, is an opulently emotional response to this very personal plea.