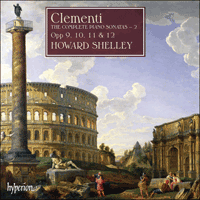 This is the second volume in a complete chronological survey of the Clementi sonatas which we hope to complete in six ’2 for the price of 1’ double CD sets released over the next three years. After the somewhat frivolous delights of Volume 1, Volume 2 displays Clementi in more serious and weighty form. The selection recorded here, particularly the Op 12 sonatas, is of pieces that begin to reveal depths of expression seldom encountered in the composer’s earlier music.

Muzio Clementi was for much of his long career one of the most famous musicians in Europe. Around the turn of the nineteenth century his public esteem was probably second only to that of Haydn, and, a decade or so later, Beethoven. But unlike the reputations of these other two, Clementi’s fame as a musician rested almost solely upon his exploits, as both player and composer, at a single instrument, the piano. And the vast majority of his compositions are sonatas for that instrument. This is a fascinating body of work which spans European musical life from Scarlatti to Chopin.

‘As in Vol 1 of his Clementi cycle, Howard Shelley's crystalline touch, poised elegance at speed and (in the slow movements) gentle flexibility are well nigh ideal’ (Gramophone)
‘Shelley has no problem meeting Clementi's demands, and he tosses off all the works here with elegant virtuosity’ (BBC Music Magazine)
‘These soul-searching works are rendered with profound feeling and sensitivity by Shelley, a worthy Clementi champion for our age’ (The Observer)
‘Clementi's sonatas have been neglected for far too long … we have had to wait an extraordinarily long time for a complete survey of this quality … with performances as characterful as Shelley's and with two CDs for the price of one, this is a genuine bargain, one that is likely to delight and to amaze in equal measure’ (International Record Review)
‘This second instalment of all Clementi's 70-odd sonatas in chronological order is no less relevatory than the first … the sonatas combine the high spirits and dexterity of Scarlatti with the classicism of Haydn and Mozart; some of the slow movements have an even greater depth of expression than theirs … furthermore, you get two discs for the price of one. Difficult to resist!’ (Classic FM Magazine)

For many present-day music lovers the name Muzio Clementi probably evokes little but bitter-sweet memories of certain inevitable Sonatinas practised year in, year out, by virtually every beginner piano student in the Western world. The Sonatinas in question are those of Opus 36, composed expressly for the purpose for which they have proved so enduringly useful. But in his own day Clementi’s reputation was quite different; particularly during the period around 1785 to 1800 he was famous throughout Europe as a virtuoso performer, and a composer of music for piano on the cutting edge of musical style—to which the present set of recordings bears witness.

Clementi was born in 1752 in Rome, where he received his earliest musical education. Then at the age of thirteen he moved to England, and made his home there for the remainder of his life, first as a teenager in Dorset, thereafter in London, and at the very end in Lichfield (Staffordshire) and Evesham (Worcestershire), where he died at the age of eighty in 1832. After about 1800 Clementi was one of the most prominent music teachers in London, and also very active as a music publisher and piano manufacturer; his firm, Clementi and Co. (with additional names reflecting the coming and going of various partners) operated at a London Cheapside address from 1798 until his retirement in 1830.

In the summer of 1780 Clementi set off on a tour of the European continent that took him to Paris, where he remained for a year, and thereafter, via several German cities, to Vienna. After a four-month stay there he evidently spent some months teaching and playing in Lyon before returning to London. All of the music included in the present volume Clementi composed during or just prior to this trip, and some of it he clearly performed in the cities along the way.

Clementi evidently composed the six sonatas of Opp 9 and 10 in Vienna, where they were quickly put out by the local music publisher Artaria during or just after his stay in that city. All but one of these sonatas is in three movements, as was the fashion in Vienna; only the second sonata of Op 10 (Maestoso—Presto) is in the two-movement Italianate format of Clementi’s past. In these sonatas he shows a heightened interest in movements of the sonata-allegro type, the characteristic shape of first movements of all the composers of this period. The sonata-allegro structure stresses the development of a small amount of musical material and the interplay of stable and unstable tonal areas, a format that in Clementi’s time suggested a certain weight and seriousness. The formal principle of rondos, commonly used in finales, depends upon literal repetition and a juxtaposition of unlike materials associated with a kind of folk-like jollity.

Four out of the six finales in Opp 9 and 10, like all the first movements, are cast in sonata-allegro form. And even the two rondos among them (the finales of Op 9 Nos 1 and 2) have a certain heft and gravity not often associated with the genre. The rondo-finale of Op 9 No 2 features a plangent minore episode cast in what eighteenth-century musicians called tempo rubato; that is, the melodic notes are systematically offset so as to fall on the off-beat—an effect that connoted sorrow or lamentation.

In one of the sonata-form finales—the lightning-like moto perpetuo of Op 10 No 1 in A major (a movement that retains distinct traces of Clementi’s Italian past and the sonatas of Domenico Scarlatti)—the second half lingers long and quietly in the distant key of C sharp minor before bursting back into the brilliant A major of the foreshortened recapitulation. And in the sonata-allegro finale of Op 10 No 2 in D major, Clementi engages in the sort of restless formal experiment that marks a good deal of his music from this period. This movement has a ‘subdominant recapitulation’, in which the return in the second half of the piece occurs in the ‘wrong’ key, G major. (One can easily hear this when, towards the end of the movement, the ebullient opening theme, rising through a full two octaves, appears again but beginning at a surprisingly low pitch.) This stratagem, together with the readjustment of the tonal bearings it entails for the rest of the movement, reappears shortly after this time in the first movement of Mozart’s famous Sonata in C major K545.

Clementi arrived in Vienna on Christmas Eve 1781. He barely had time to unpack his bags before he was summoned to perform that evening for the Emperor and his guests, the Grand Duke Paul and Duchess of Russia. What he was not told was that a local pianist of note, Wolfgang Amadeus Mozart, was also invited, the idea being that the two should engage in a kind of piano-playing contest—which was a surprise to both musicians. Each improvised and performed compositions of his own, after which they played together on two pianos. Though no winner was declared, Mozart was later unremittingly critical of Clementi’s playing; shortly after that evening he wrote to his father: ‘Clementi plays well, so far as execution with the right hand goes. His greatest strength lies in his passages in thirds. Apart from this he has not a kreutzer’s worth of taste and feeling—in short he is simply a mechanicus.’ Eighteen months later, he added: ‘Supposing you do play sixths and octaves with the utmost velocity (which no one can do, not even Clementi) you only produce an atrocious chopping effect, and nothing else … he writes Presto over a sonata or even Prestissimo and Alla breve, and plays it himself Allegro and in 4/4 time. I know this is the case, for I have heard him do so.’

One composition Clementi tells us he played at this contest was the Sonata in B flat major, Op 24 No 2, whose opening theme much resembles the beginning of Mozart’s later overture to The Magic Flute. Another is his Toccata from Op 11. The first and last sections of this piece feature long passages of those notoriously difficult parallel thirds, marked, true to Mozart’s characterization, Prestissimo, alla breve. This is a composition that belongs to what Clementi later referred to as his initial ‘virtuoso’ phase. We do not know what the Emperor or his Russian guests thought of this kind of technical wizardry, but Mozart was little impressed. At the time of the contest Clementi almost surely had available some of the more mature and expressive music of Opp 7 and 8 (see volume 1 of this survey); it would be interesting to know how Mozart might have reacted to this.

At least some movements of the four sonatas of Op 12 were also finished by the time of the Viennese sojourn. Some of this music reverts to the triadic and ‘murky bass’ (i.e. broken-octave) accompanimental formulas that recall Clementi’s writing as early as Op 2, and all but one of these sonatas again have rondos as final movements. The finale of the first sonata is a charming set of variations on ‘Je suis Lindor’, Antoine-Laurent Baudron’s setting of the romanze from Beaumarchais’ Barbier de Séville. Here ornamental runs of even semiquavers (sixteenth-notes) mix with Clementi’s well known specialities such as passages in thirds and broken octaves to produce a convincing result—such techniques somehow seem rather at home in variations. Mozart also wrote an unpretentious set of variations on this tune (K354); this time his composition (written in 1778) came first.

Perhaps the most surprising aspect of the sonatas of Op 12 are the slow movements. All four of them are deeply serious pieces that aim for depths of expression seldom encountered in the composer’s earlier music. Far-flung harmonies, including generous use of that favorite agent of harmonic obfuscation of the early nineteenth century, the diminished seventh chord, add to an impression of impassioned pathos. Sometimes all this emotion seems terse and controlled, as in the remarkably laconic Largo of the second sonata; or it can be given more space to play out as in the ambitious and eloquent (at points perhaps merging on the grandiloquent) Lento of the fourth.

In a retrospective statement of 1806 that reaches us through his student Ludwig Berger, Clementi seemed to acknowledge that Mozart’s excoriation of his early ‘virtuoso’ manner was not entirely unjust; according to Berger, Clementi recalled that ‘in his earlier period he had taken particular delight in brilliant feats of technical proficiency, especially in those passages in double notes that were not common before his time, and in improvised cadenzas. It was only later that he adopted a more melodic and noble style of performance.’ The slow movements of the Op 12 sonatas are a good example of this ‘more melodic and noble style’.