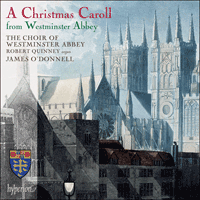 A Christmas Caroll from Westminster Abbey

This new recording from Westminster presents a delightful and unusual selection of music for Christmas from the Abbey Choir. It encompasses all the diverse themes of Christmas which have inspired composers across the ages: light shining in darkness; the tenderness of mother and child; the fulfilment of promise; and the warm merriment of corporate celebration.

An excellent selection of contemporary carols features the composers Jonathan Dove and Bob Chilcott among others. The richness of twentieth-century church music is illustrated in works by Poulenc, Walton, Mathias and Leighton, and by the heartbreakingly lovely piece The little road to Bethlehem by Michael Head. Skilful arrangements of the traditional carols Silent night, In dulci jubilo and I saw three ships, complete this attractive seasonal release.

‘The best newly recorded Christmas CD by a country mile … terrific’ (The Mail on Sunday)
‘A must-have addition to any choral collection’ (Choir & Organ)
‘The Abbey choir's splendid performance … an ambitious and superbly sung programme, sympathetically framed within the choir's spaciously atmospheric home acoustic’ (BBC Music Magazine)
‘The Christmas Eve carol service at Westminster Abbey is one of the most warming events in the festive calendar, and this CD captures the atmosphere beautifully … the singing is a constant delight’ (The Daily Telegraph)
‘Westminster Abbey Choir commands top spot among this year's Christmas vocal releases. James O'Donnell and his choristers are on splendid form, upholding the character of each piece in a compelling programme without false sentiment or wanton display’ (Classic FM Magazine)

Christmas has proved an apparently bottomless source of inspiration for composers throughout the history of notated music. That it should remain so in our own age, in which the theological heart of the festival is largely hidden behind commercial paraphernalia, is perhaps not as surprising as it might seem at first sight. Christmas is a multi-faceted topos, encompassing diverse themes which appeal as much on a secular as on a sacred level: light shining in darkness; the tenderness of mother and child; the fulfilment of promise; and the warm merriment of corporate celebration.

Robert Pearsall’s In dulci jubilo, the most familiar work in this programme, is a choral arrangement par excellence—indeed, it is perhaps the archetype for the countless subsequent arrangements of traditional melodies for SATB choir. Pearsall’s carol can be heard as an ‘Englishing’ (or Anglican-ization?) of a foreign tradition, not dissimilar perhaps to the adoption of German Christmas traditions such as the Christmas Tree into English life in the mid-nineteenth century. (Victoria and Albert married in 1840, four years after Pearsall wrote his setting.) The original tune, which in the hands of Praetorius or Scheidt dances boisterously, is rendered soft-edged and quietly grand by Pearsall’s smooth harmony and effortless part-writing. In the later verses, Pearsall’s counterpoint often seizes the foreground from the original melody; more than simply a straightforward harmonization, this is almost a carol-fantasia.

Unlike Pearsall and other arrangers of traditional melodies, Francis Poulenc took time-honoured liturgical texts from the Catholic tradition and dressed them in bold new clothes, though (as so often in his music) not without reference to the past. Poulenc rediscovered his faith following the death of a close friend in 1937, and the Quatre motets pour le temps de Noël form part of a series of liturgical works that followed this event. These exquisite miniatures paint four colourful scenes from the nativity story. O magnum mysterium is the most profound: slow and (by Poulenc’s standards) harmonically austere, it grows in intensity toward the final repetition of the main text, via an intimate verse in praise of the Virgin. The text of Quem vidistis makes two demands of the shepherds, set in contrasting ways by Poulenc. ‘Who did you see?’ is a cantilène accompanied by searching quaver movement; by contrast, the imperative ‘Speak … and proclaim the birth of Christ’ is a trumpet blast worthy of the annunciatory angels themselves. The crystalline refrain of Videntes stellam evokes a placid and (of course) starlit night, through which the Magi travel with burgeoning excitement; this reaches a rich climax as they enter the stable and present their gifts; outside the star shines on, undisturbed. In the final motet, Hodie Christus natus est, the faithful make their response to the news with unbuttoned exuberance: ‘Gloria in excelsis Deo’ accompanied by popping champagne corks.

Kenneth Leighton, one of the twentieth century’s most prolific writers of Church music, is known for his acerbic harmony and use of propulsive, syncopated rhythm; but in his relatively early Herrick setting A Christmas Caroll (1953) these characteristics are hard to find. The musical language is redolent of Vaughan Williams, Howells, and (particularly) Finzi—none of whose music one would readily associate with Leighton’s later style. However, another recurrent feature of Leighton’s music—his skill as a writer of counterpoint—is in plain view here, especially in the interweaving of baritone soloist, choir and organ at the start of the piece’s final paragraph, ‘The nobler part Of all the house here, is the heart’. Only in the organ postlude and final, astringent cadence, do we glimpse the familiar Leighton of bare-fifth harmony. This quasi-medieval style is also adopted by William Walton in his ebullient All this time, a setting of an anonymous sixteenth-century text. The refrain, harmonized robustly with parallel fourths and fifths, alternates with more lyrical, monophonic verses.

The texts and music of the medieval period have indeed provided rich pickings for twentieth- and twenty-first century composers. This trend reaches back at least as far as the publication of The Oxford Book of Carols in 1928; and it was confirmed by the composition of the seminal work in the genre, Britten’s A Ceremony of Carols, in 1942/3. The use of medieval texts seems particularly appropriate in Ave Rex, a carol sequence composed by William Mathias in 1969 for the Cardiff Polyphonic Choir. Mathias’s music is full of parallel fourths and fifths, a sound guaranteed to evoke medieval music; he also makes much use of bitonality. The pungent sound world is established by the organ flourishes and clashing repetitions of ‘Ave’ in the opening movement; this material alternates with more stately settings of the English portions of the text. The second movement, Alleluya, a new work is come on hand, is less severe than the first, though open fifths still predominate. The mood is lively; the short choral phrases are articulated by bouncy organ interjections which are extended in the final verse to a Stravinskian descant of running staccato quavers. At the heart of the sequence is one of the most popular medieval carols, There is no rose, which touches upon the mysteries of the Immaculate Conception, Incarnation, and Trinity, all in very ‘little space’; Mathias alternates between single-voice settings of the English part of the text and three- and four-part Latin refrains. The musical language is much softer-edged than the surrounding movements, making use of the distinctive Lydian scale, in which the fourth note is sharpened. The refrains are all in compound time; initially rocking peacefully like a lullaby, they gather pace toward ‘Gloria in excelsis Deo, Gaudeamus’, in bright A major. Then the tessitura and tempo drop for the final, gently melismatic verse. The fourth carol in the sequence is the best known, and the most energetic; it also provides a secular foil to the sacred texts that surround it. The eponymous Sir Christèmas is a sort of messenger-cum-master of ceremonies; he first announces the birth of ‘a child full young’, then bids the assembly ‘Buvez bien par toute la compagnie’. Mathias’s music is suitably uproarious, ending with a shouted ‘Nowell’. An organ cadenza then provides the link back to the sequence’s opening.

The American composer James Lavino has made choral settings of a number of poems by distinguished poets, among them Blake, Dylan Thomas, and W H Auden. No less fine a text is Donne’s sonnet Nativity, part of the series entitled La Corona. Lavino contrives a memorable opening gesture: ‘Immensity cloistered in thy dear womb’ is set to intense, close chords which emerge from the initial unison. A number of other contemporary composers—among them Adès, Birtwistle, Harvey, Maxwell Davies, MacMillan, Pärt, Tavener, and Weir—have contributed in their own voices to the Christmas repertoire over the last twenty-six years; that is, during the tenure of Stephen Cleobury as Director of Music at King’s College, Cambridge. Cleobury has established a tradition of commissioning a carol every year for the Festival of Nine Lessons and Carols; a new piece of contemporary ‘classical’ music is thus introduced to an audience of many millions every year. Three recent commissions are recorded here, together with Cleobury’s own arrangement of the traditional English carol Joys Seven.

In contrast to the bracing austerity of Mathias’s language in Ave Rex, Bob Chilcott’s The Shepherd’s Carol is warm and gentle. It captures the naive folksiness of the anonymous text perfectly, repeating with apparent simplicity an original (but traditional-sounding) melody from verse to verse; initially unaccompanied, from the second stanza it is woven into an exquisite choral texture. The undisputed king of Christmas choral music is, of course, John Rutter, who uniquely has contributed two carols to the King’s canon. The second of these, Dormi, Jesu, was composed in 1999. It sets a Latin text of unknown origin, together with its translation by Coleridge (‘Sleep, sweet baby …’). The piece displays all the hallmarks of Rutter’s music; but alongside the memorable tune, perfect choral writing, and sensitivity to the text, the harmony is more than usually rich, straying some way into the blues-zone. By the final refrain and coda, the baby is very drowsy indeed, gently nodding off post-feed. Jonathan Dove’s The Three Kings, a setting of Dorothy L Sayers, was commissioned for the 2000 Festival of Nine Lessons and Carols. Sayers’s division of the kings into three ages, with a stanza each—young, middle and old respectively—gives the piece its structure; the melancholic mood is immediately established by the beautifully simple lullaby refrain. Dove achieves a magical transformation at the start of the third stanza, by unexpectedly switching to the major mode. He then expands the scoring at ‘many a gaud and glittering toy’, the inner voices providing a sparkling pointillistic accompaniment to the slower-moving melody. An ecstatic climax is reached; but this subsides into a wistful repeat of the opening refrain, leaving a question-mark hanging over the scene.

‘Light’ music and Christmas are easy bedfellows. It is therefore no surprise that the early twentieth-century master of quasi-‘popular’ English song, Michael Head, should have scored his most enduring success with The little road to Bethlehem. This beautiful setting of a sentimental text by Margaret Rose stands outside the liturgical tradition, and entirely within another (familiar from countless Christmas cards) in which the nativity scene is transposed to pastoral England circa 1900. The simple, perfectly proportioned tune, the sweet harmony, and the liberal quantity of humming all combine to make The little road to Bethlehem the quintessential ‘easy listening’ carol. Similarly direct and uncomplicated are the carol arrangements for upper voices that complete the programme. Christopher Bowers-Broadbent made his four-part arrangement of Silent night for the choristers of Westminster Cathedral; the melody is couched in a gently rocking accompaniment. James O’Donnell’s setting of I saw three ships was written for this recording.