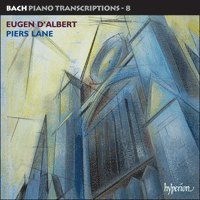 Hyperion’s Bach Piano Transcriptions series reaches volume 8, and continues to surprise and delight with a disc containing many first recordings. The controversial figure of Eugen d’Albert was one of the greatest pianists of his day and, although largely forgotten now, a composer of genuinely international renown. A sometime student at the Royal College of Music, d’Albert rejected his British upbringing and nailed his colours to the mast of German music. Bach was an important part of his performing career—and like other great nineteeth-century pianists, d’Albert saw in the monumental scale of the organ works an opportunity to synthesize the works of the Master with the expanded capabilities of the modern piano.

‘Lane takes no prisoners in these sonorous and exhilarating performances, conjuring up from the Steinway's richly resonant bass a cathedral's 32 foot pedal division to thrilling effect … I guarantee you will come away awed anew by the genuis of Bach and amazed by the ingenuity of d'Albert’ (Gramophone)
‘D'Albert's versions of the the C minor Passacaglia, and the Preludes and Fugues in C minor and A major, are extraordinary and exquisite, and Lane plays them with a ravishing finesse that belies their often monumental difficulty’ (The Guardian)
‘I found Lane's Prelude (Toccata) and Fugue in D minor, BWV538 unassailably alive to the possibilities that both Bach and d'Albert leave open. The rhythmic impulse never flags, the pithy contrapuntal detail keeps afloat and there is a subliminal sense of goal to keep the thing intact. The A major Fugue, BWV536 shows the pianist highly authoritative and, for me, underlines the highest musicianship’ (International Record Review)
‘Masterly performances by Piers Lane. D'Albert's versions … didn't attempt to make the instrument sound like a cathedral organ. In his ingenious hands, they become compelling piano pieces’ (The Sunday Times)

Johann Sebastian Bach is hardly likely to require an introduction to listeners of this CD, but Eugen d’Albert (1864–1932) may well be another matter. D’Albert, though hardly a household name today, was during his lifetime one of the world’s most celebrated pianists, and a composer of genuinely international renown. His opera Tiefland (1903)—a racy verismo drama with a plot more reminiscent of soap opera than straight opera—remains a repertoire piece in Germany, a position that it has maintained despite the almost crippling misfortune of having been one of Hitler’s favourite stage works.

And d’Albert’s own life was also straight out of a soap opera. As with Henry VIII of England, his professional achievements have been somewhat overshadowed by his fondness for getting married. He too had six wives—and indeed would have surpassed his famous predecessor by acquiring a seventh, had death not put a decisive end to his marital ambitions. But d’Albert did at least attempt to beat the royal record, for he died after travelling to Riga to secure yet another ‘quickie divorce’ under the then fairly lax Latvian regulations. (Unlike Henry, he was too fastidious to take the easy road of simply executing unwanted spouses.) The flesh may have been weak, but the spirit was still impressively willing.

So, in an all-too-human fashion, interest in d’Albert’s marital addiction has tended to eclipse discussion of his music, especially as several of his wives were celebrities in their own right—most notably the Venezuelan pianist Teresa Carreño. But d’Albert could certainly make as well as take jokes about the procession of abruptly discarded damsels. He claimed his ambition was to marry as many times as Beethoven had produced symphonies—the ninth time with a chorus! And on being asked what had been the problem with one particularly pretty previous partner, he ruefully quoted the words of her first husband: ‘The landscape was wonderful, but the climate terrible!’

D’Albert’s national background was as complex as his domestic life. He was brought up in Scotland, the son of a German-born French-Italian father and an English mother. Precociously talented, he was quickly offered a scholarship to the Royal College of Music in London, where his teachers included Ernst Pauer and Arthur Sullivan. He eventually crowned his studies with the Mendelssohn Prize for composition. Sullivan was so impressed with his energetic student that he assigned him the task of completing the overture to his opera Patience in 1881 (a piece of hack-work that Sullivan himself could not be bothered to do). Masterclasses in Weimar with a similarly impressed Liszt soon followed, as did d’Albert’s notorious decision that he would not ‘remain an Englishman’, to quote another Gilbert and Sullivan opera. He publicly repudiated Britain, and—perhaps more understandably—its weather, in a letter to a German newspaper in 1884. Here he made his new patriotic allegiance clear:

Above all things I scorn the title ‘English pianist!’ Unfortunately, I studied for a considerable period in that land of fogs, but during that time I learned absolutely nothing; indeed, had I remained there much longer, I should have gone to utter ruin. Only since I left that barbarous land have I begun to live. And I live now for the unique, true, glorious, German art.

Although d’Albert was only a naive twenty-year-old when he wrote this impolitic proclamation, its consequences dogged his reception in Britain for some time. Sullivan, in particular, was furious, and vainly tried to have the Mendelssohn Prize withdrawn from his ungrateful student. For his part, d’Albert continued his ‘Germanization’ with a will, even adopting a slightly foreign accent when speaking his native English (a strategy copied by the London-born conductor Leopold Stokowski, who also managed to develop a peculiarly exotic pronunciation). Naturally enough, d’Albert’s Teutonic tendencies extended to his repertoire as a pianist, which increasingly centred on Beethoven and Bach. With the latter, however, he came up against a problem, for some of the most imposing of Bach’s keyboard works had been written for organ, and included extensive pedal parts. The solution was obviously to transcribe these pieces for concert use, a strategy also adopted by d’Albert’s great contemporary Ferruccio Busoni, whose Bach transcriptions so eclipsed his original music that his wife was once absent-mindedly introduced as ‘Frau Bach-Busoni’!

D’Albert and Busoni became the two pre-eminent arrangers of Bach’s music in the generation after Liszt. Yet their approaches to the task were divergent, as is illustrated by their difference of opinion over Busoni’s piano transcription of Bach’s Chaconne for violin. This magnificent transcription was dedicated to d’Albert in 1893, and it was something of a disappointment for Busoni that the dedicatee’s initial reaction was nothing but a long silence. Indeed, it was around this time that Busoni began to refer to his notably shorter colleague as ‘d’Alberich’—after the malevolent dwarf in Wagner’s Ring. More than a year later a letter finally arrived, the contents of which proved even more disappointing than d’Albert’s previous reluctance to respond at all. D’Albert felt that Busoni had added too much to his transcription, that he had overstepped the mark in terms of expansion of texture and insertion of octaves. Accordingly, d’Albert’s own Bach arrangements are somewhat more reticent than Busoni’s—often less thickly textured, occasionally of a surprising simplicity.

A direct comparison is rarely possible, as both pianists mostly chose different works to arrange, but there are two instructive overlaps. The first is the great organ Passacaglia in C minor. Busoni did not attempt to complete either a piano solo or piano duet transcription of this piece—reportedly saying that it would offer too much for two hands to do, but not enough for four—but he did sketch out a few bars of a possible solo version in his essay ‘On the arrangement of Bach’s Organ Works for Piano’. (This appeared as an appendix to his edition of Book One of the Well-tempered Clavier.) We are here offered part of the Passacaglia arranged in a much thicker and more monumental style than the transparent d’Albert version heard on this CD. In general, Busoni exploits chordal doubling, the resonance of the piano’s deep bass register, and the sostenuto (middle) pedal much more than his rival. Though some of d’Albert’s fairly frequent long-held bass notes could certainly have used the middle pedal, this fairly recent invention from Steinway in New York did not feature on most of the pianos he would have played in Europe—at first not even on pianos made in Steinway’s own Hamburg factory. Busoni, on the other hand, had become well-acquainted with the new pedal during his time teaching at the New England Conservatory, and soon became an enthusiastic advocate. To summarize, Busoni’s goal was the imitation of the sonority produced by a large organ in a reverberant cathedral, d’Albert’s aim was greater clarity. This does not mean that d’Albert’s transcriptions are always thin-textured—on the contrary. The other arrangement in common—that of the self-standing Prelude and Fugue in D major—shows d’Albert exploiting a plethora of virtuoso octaves and extended chords. But the aural effect of the d’Albert transcription is even here slightly more restrained than that of Busoni’s, with the full arsenal of bass octaves usually kept in reserve for especially weighty climaxes.

We can observe a similar economy in d’Albert’s arrangement of six of Bach’s preludes and fugues. In several of these pieces, for example the D minor Prelude (Toccata) and Fugue, we might notice another d’Albert characteristic that marks out his divergent path from Busoni, namely the use of arpeggiated chords and octaves to permit the performance of notes that were given to the pedal in Bach’s original. What to do about the pedal part is, of course, one of the main problems in piano/organ transcription. D’Albert tended to follow Liszt’s approach. He took a relaxed attitude to the arpeggiation of the wider stretches, both in the bass, and—by implication—in the five-note extended chords that are sometimes required of the right hand. It is unlikely that the diminutive d’Albert, or even many taller pianists, would have been able to play some of these chords without arpeggiation. Busoni, by contrast, felt that spread chords were inimical to the proper imitation of an organ sonority, and therefore instructed players of his transcriptions (a trifle impractically) that ‘all chords, including the widest stretches, should be performed together’—a demand that has either been surreptitiously ignored in practice, or met by unobtrusively removing a note or two from the offending chords.

In the final analysis, whatever style of Bach arrangement one prefers is largely a matter of taste. D’Albert’s transcriptions are very much in the tradition of other distinguished Liszt students, including Alexander Siloti. They adopted the minimally invasive approach of their revered master to the works of Bach. Busoni took a divergent pathway, in which more heed was paid to the actual acoustic effect of organ registration in an echoing cathedral. The former method privileges lucidity over weight, the latter promotes an impressively cyclopean sonority that can risk indistinctness. Over the last hundred years, the Busoni transcriptions have undoubtedly maintained a much firmer place in the repertoire than the d’Albert, partly because their imposing presence makes them ideal pieces to open a recital. Yet many of the d’Albert transcriptions could also admirably fulfill this function, and probably would be chosen frequently to do so—if only they were better known by pianists in the first place. The present recording will hopefully go some way to redressing this.