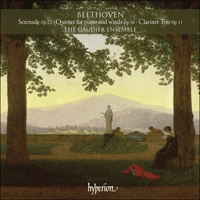 Richard Wigmore writes: “In November 1792 the twenty-one-year-old Beethoven left his native Bonn for Vienna, then vying with London as the musical capital of Europe. His plan was to study composition with Haydn before launching himself as a composer–performer. With the help of aristocratic contacts—indispensable to any aspiring young musician in Vienna—he quickly made his mark in the city’s salons, dazzling the cognoscenti with his prowess as pianist and improviser and his brilliantly original compositions. He was understandably cautious about tackling the elevated genres of the string quartet and the symphony in which Haydn, still at the height of his powers, especially excelled. But he was prepared to risk head-on comparison with the recently dead Mozart in works like the first two piano concertos, the E flat major String Trio Op 3 (modelled on Mozart’s Trio K563) and a clutch of chamber works involving wind instruments.”

Beethoven clearly had Mozart’s quintet K452 in mind when writing his quintet in E flat for piano and wind however despite the instrumentation and structure being the same Beethoven’s voice and methods remain very much his own, writing on a more expansive scale, creating outer movements that at times resemble a chamber concerto for piano and wind.

Also on this disc is the elegant and refined Trio in B flat major, composed for the then-rare combination of clarinet, cello and piano and the Serenade in D major, Op 25, for the airy combination of flute, violin and viola.

‘The performances are of superlative quality: sophisticated 'conversations' between musicians of rare insight deserving wider circulation’ (The Sunday Times)
‘This is a delightful program of 'Beethoven-lite' for which the Gaudier Ensemble makes the best possible case. Recording and notes are up to Hyperion's usual standards. I, for one, am grateful that the label seems to have survived its devastating lawsuit loss and is still able to continue producing such wonderful recordings. Recommended’ (Fanfare, USA)
‘Experience has demonstrated to me that any new recording from the Gaudier Ensemble is cause for rejoicing’ (MusicWeb International)
«Ce CD procure d'infinis bonheurs et d'abord ceux d'une entente et d'une homogénéité sonore parfaite entre les protagonistes des deux premières œuvres» (Classics Today France)

In November 1792 the twenty-one-year-old Beethoven left his native Bonn for Vienna, then vying with London as the musical capital of Europe. His plan was to study composition with Haydn before launching himself as a composer–performer. With the help of aristocratic contacts—indispensable to any aspiring young musician in Vienna—he quickly made his mark in the city’s salons, dazzling the cognoscenti with his prowess as pianist and improviser and his brilliantly original compositions. He was understandably cautious about tackling the elevated genres of the string quartet and the symphony in which Haydn, still at the height of his powers, especially excelled. But he was prepared to risk head-on comparison with the recently dead Mozart in works like the first two piano concertos, the E flat major String Trio Op 3 (modelled on Mozart’s Trio K563) and a clutch of chamber works involving wind instruments.

The template for Beethoven’s piano and wind Quintet in E flat major, Op 16, is clearly Mozart’s Quintet for the same combination (piano with oboe, clarinet, bassoon and horn), K452. Beethoven’s work was probably composed in Berlin in 1796 and first heard at a concert in Vienna on 6 April 1797. But while this essentially genial, urbane music owes a debt to Mozart in general and his piano and wind quintet in particular, Beethoven’s voice and methods remain his own. Mozart had subtly interwoven the piano and the wind quartet. Beethoven, working on a more expansive scale, characteristically sets them in opposition, so that the outer movements at times resemble a chamber concerto for piano and wind. Beethoven follows Mozart’s plan of opening with a majestic slow introduction, though typically the rhetoric is more emphatic. Typical of the whole work, too, is the way the suave cantabile themes of the Allegro ma non troppo are first announced by the piano alone and then taken up by the wind, with the clarinet very much primus inter pares. The development immediately transforms the exposition’s final cadence in a mock-stormy C minor, with explosive scales from the piano and cussed offbeat accents, before a tense series of dialogues between the individual wind instruments against rippling keyboard figuration. Where Mozart rounds off his first movement with a tiny tailpiece, Beethoven balances his substantial development with a seventy-bar coda—though he surely borrowed from Mozart the idea of enlivening the closing stages with rollicking horn flourishes.

The Andante cantabile is a simple rondo design in which increasingly florid appearances of the main theme (introduced, as usual, by the piano alone) enfold two contrasting episodes. The first opens as a plaintive duet for oboe and bassoon, while the second, in the sombre and (for the wind) difficult key of B flat minor, features a noble horn solo, interrupted by a brief development of the main theme. For his finale Beethoven follows the examples of Mozart (in the horn concertos and several piano concertos) and his own B flat Piano Concerto (No 2) and writes a bouncy ‘hunting’ Rondo in 6/8 time. There are brief hints of Beethovenian truculence in the central episode, where the rondo theme suddenly erupts in E flat minor. But otherwise the mood is one of unbridled exuberance, right down to the coda, whose teasing play with the theme recalls not so much Mozart as Beethoven’s former teacher Haydn.

With an eye to increased sales, Beethoven also published the piano and wind quintet in an arrangement for piano and string trio. He likewise maximized the commercial potential of the Trio in B flat major, Op 11, composed in 1797–8 for the then-rare combination of clarinet, cello and piano but also designed to be played, with minimal adjustments, by a conventional piano trio. (Except for one place near the end of the first movement, the clarinet never descends beyond the violin’s compass into its oily chalumeau register.) Compared with the quasi-symphonic four-movement Op 1 trios composed a few years earlier, the B flat Trio, in three movements only, is a work of elegant relaxation. Or so it sounds to us. When it was published, though, the critic of the influential Allgemeine musikalische Zeitung found the Trio ‘difficult’ and reproached Beethoven for writing ‘unnaturally’!

The broadly planned Allegro con brio is full of typically Beethovenian wit and ingenuity, with piano and clarinet alternately colluding and jousting for prominence. After an emphatic fortissimo close in the dominant (F major), for instance, the piano, quizzically interrupted by the cello, slyly deflects the music through D major and G minor before the expected ‘second subject’ (a shapely, dolce tune, rhythmically akin to the first) sails in on the clarinet. The beautiful theme of the E flat Adagio, a more soulful relation of the minuet in the near-contemporary G major Piano Sonata, Op 49 No 2, gives the cello its first moment of real glory in the work. There is a breathtaking remote modulation, à la Haydn, from E flat minor to E major at the movement’s centre; then, with the restoration of E flat major, the main theme is gradually appropriated by the clarinet against glistening keyboard figuration.

It was probably the Viennese clarinettist Joseph Bähr, for whom Beethoven wrote the Trio, who suggested the theme for the variation finale: a favourite number from Joseph Weigl’s new comic opera L’amor marinaro (‘Love at Sea’), premiered in Vienna in October 1797. According to his pupil Carl Czerny, Beethoven often contemplated writing an alternative finale, presumably because he found the original too lightweight. In fact, these nine variations are among the most inventive in early Beethoven. Highlights are the spare-textured No 2 for clarinet and cello alone, the two free variations in the tonic minor (Nos 4 and 7) and the trenchantly polyphonic final variation, which then pivots the music from B flat to G major for the start of the witty syncopated coda.

Beethoven’s friend and pupil Ferdinand Ries tells a colourful story relating to an early performance of the Trio. Present in the audience was a rival virtuoso pianist, Daniel Steibelt, renowned for his vanity and arrogance. At a similar musical gathering the following week, he attempted to trump the Trio’s finale with his own well-prepared ‘improvisation’ on the same aria from L’amor marinaro. Outraged, Beethoven seized the cello part of a quintet by Steibelt, placed it upside down on the piano’s music stand and hammered out a theme from the opening bars with one finger. He then improvised with such fire and brilliance that Steibelt, by now thoroughly humiliated, abruptly left the room and avoided all further contact with Beethoven.

The other work on this disc, the Serenade in D major, Op 25, for the airy combination of flute, violin and viola, was long thought to belong to the same period as the Clarinet Trio. Though the evidence is not watertight, 1800–01 now seems more likely, making the Serenade a close contemporary of the popular Septet. Written primarily for the profitable domestic market (since the days of Frederick the Great the flute was the instrument par excellence of the gentleman amateur), the Serenade, like the Septet, is a delightful late offshoot of the eighteenth-century divertimento tradition. Like Mozart in his Salzburg serenades, Beethoven begins with a march-like movement, here titled ‘Entrata’. In the opening fanfare the flute seems to be masquerading as a horn; the strings quickly join in the fun, and the whole movement is full of delicate, quickfire give-and-take between the three instruments.

Following tradition, the next movement is a galant minuet with two trios, the first for violin and viola alone, the second a skittering flute solo with a mandolin-style accompaniment. A mock-splenetic D minor Allegro molto leads to the Serenade’s centrepiece, a set of variations on a theme announced by the strings in double stopping to create a quartet texture. The three variations spotlight each of the instruments in succession, first flute (who turns the meditative theme into a frolic), then violin (with skipping triplets) and finally viola. After a frisky scherzo with a gliding, contrapuntal D minor trio, a brief Adagio acts as an introduction to the final rondo, a faintly rustic contredanse with a main theme characterized by piquant ‘Scotch Snap’ rhythms.