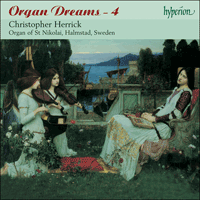 The fourth volume in our ‘Organ Dreams’ series finds Christopher Herrick at the helm of the Pels & van Leeuwen organ of St Nikolai, Halmstad, in Sweden, and this instrument – built in 2003 – turns out to be a perfect vehicle for the repertoire.

‘Whether your dreams are of the nocturnal or day variety there is plenty to enjoy on this fastidiously engineered disc; Herrick's playing is strong on communication and conviction. Most refreshing’ (Gramophone)
‘As ever, an enterprisingly devised selection of music, excellently performed on a pristine instrument. And, by the way, the quality of the recording is very good, too’ (International Record Review)

Charles-Marie Widor (1844–1937) was organist of St-Sulpice in Paris from 1869 until 1933 and succeeded Franck as Professor of Organ at the Paris Conservatoire. He wrote not only ten organ symphonies but also a number of books, of which his Technique de l’orchestre moderne (Paris, 1904), is the best known. Marche du veilleur de nuit (‘March of the night watchman’) comes fourth in Widor’s Bach’s Memento, which comprises six organ arrangements of movements from the works of J S Bach. In this particular case ‘very free paraphrase’ is more accurate than ‘arrangement’, for this is far from a faithful transcription of the organ prelude Wachet auf, ruft uns die Stimme, BWV645, the first of Bach’s Schübler chorales. Taking his cue from the watchman referred to in Nicolai’s hymn, Widor depicts a figure cheerfully strutting along the darkened streets (and provides what appears to be the only evidence that this formidable Frenchman had a sense of humour).

Like Widor, César Franck (1822–1890) was a Parisian organist, presiding from 1858 until his death at the Cavaillé-Coll organ at Ste-Clotilde. Prélude, Fugue et Variation, Op 18, the third of his Six Pièces (1860–62), is dedicated to Saint-Saëns. Coming as it does directly after Franck’s Grande Pièce Symphonique, Op 17, its title might suggest a contrasting work of neo-Baroque severity, but what could be more Romantic than the haunting oboe melody of the first movement? A typical Franckian theme, moving largely by step and emphasizing particular notes of the scale, it has two limbs, the first a flowing theme of five-bar phrases, the second a dogged affair ascending the scale in four-bar phrases (and taken up in quasi-canonic fashion by the pedals). A short bridge passage introduces the second movement, a sober fugue on a subject, vocal in character, marked cantando. Assisted by stretti, a muted climax is reached, and the music proceeds without a break to the Variation, in which the hautbois, taking the stage again, has the ‘flowing’ and ‘dogged’ themes of the first movement, but here set against rippling semiquavers.

Samuel Sebastian Wesley (1810–1876), the outstanding cathedral musician of Victorian England, was successively organist at the cathedrals of Hereford, Exeter, Winchester and Gloucester, and spent seven years at Leeds Parish Church between the second and third of these appointments. This Andante in E flat major is the third of Wesley’s Second Set of Three Pieces for Chamber Organ. Products of the Exeter years (1835–42), both sets were written for the chamber organ at Killerton House, Broadclyst, Exeter, the home of the Acland family; Lady Acland, a Wesley pupil, was the dedicatee. (This Andante must be distinguished from the Andante in E flat with which the first set begins: that example is in 4/4; this one is in 2/4.) Wesley was noted for skill at extemporization, and perhaps this graceful movement gives an idea of the sort of music with which he beguiled cathedral congregations in the few minutes immediately preceding services.

Like Widor and Franck, Maurice Duruflé (1902–1986) was a Parisian organist, presiding at St-Etienne-du-Mont from 1930 until his death. Born at Louviers, near Paris, his training began at Rouen Cathedral and continued at the Paris Conservatoire, where he studied with Paul Dukas. His Suite, Op 5, which dates from 1934, is dedicated to Dukas, and the Sicilienne, its second movement, is among Duruflé’s loveliest creations. Its main theme, an oboe melody distantly related to that of Franck’s Prélude, appears three times (in G minor, B flat minor and G minor again) and gives the movement a rondo-like structure; but the work has an improvisatory flavour nonetheless, exploring a wide range of soft colours and encompassing some ravishingly beautiful textures. It is not in fact Franck who comes to mind here but the Debussy of Clair de Lune, for this is surely another night piece, painting not the streets patrolled by Widor’s watchman, but a formal garden dominated by moonlit statuary and brilliant fountains. The movement ends, as did Franck’s Prélude, Fugue et Variation, with the main theme heard against a bubbling flute accompaniment.

Harvey Grace (1874–1944), the second English cathedral organist in this programme, was at Chichester Cathedral from 1931 to 1938 but is better known for an edition of the Rheinberger sonatas; his book The Organ Works of Bach, which although published in 1922 is read admiringly (and with profit) by organists of today; and his work for The Musical Times, which he edited from 1918 until his death. His Ten Compositions for Organ, which date from around 1922, are seldom heard nowadays but reveal a thoughtful and resourceful composer. Reverie, the eighth of them, is based on the eighteenth-century hymn-tune University, and the score makes clear that Grace was thinking of its pairing with George Herbert’s paraphrase of Psalm 23, The God of love my Shepherd is. Listening to this almost artless little work (and to S S Wesley’s Andante) is to be ushered into that corner of music-making practically unique to the organist – extemporization – and one can imagine an organist of Grace’s generation ‘playing in’ the choir and clergy with gentle reflections such as these, making much use of the soft woodwind and string colours of the Romantic organ. The harmonic vocabulary of the cathedral organist had changed somewhat since the nineteenth century, and whereas Wesley’s harmony is coloured by Mozart and the early Romantics, Grace’s seems at times touched by Delius.

Charles-Valentin Alkan (1813–1888) is the fourth Parisian organist in this programme, but – unlike Widor, Franck and Duruflé – he appears never to have held a post as organist (even though in 1834 the Paris Conservatoire awarded him a premier prix for the instrument). In some ways he was to the nineteenth century what Erik Satie was to the twentieth. Both were rather enigmatic figures, leading slightly odd, unconventional lives, and both wrote music which occasionally seems eccentric but which nonetheless commands its adherents’ fierce loyalty. Prière is the fifth of his Treize prières, Op 64, a collection for organ or pedal piano dating from the late 1860s. It is heard here in an arrangement by Franck, who evidently held Alkan in high regard, for it was to him that he dedicated his Grande Pièce Symphonique, and he took the trouble to arrange not only some of the Op 64 set but also some of the Onze grands préludes, Op 66. This particular Prière is based entirely on one theme, broad and chorale-like in character, which Alkan works up to a commanding climax.

Herbert Sumsion (1899–1995) is the third English cathedral organist in this programme. Like S S Wesley he was Organist of Gloucester Cathedral, serving there from 1928 until 1967. A chorister at Gloucester in the days of A H Brewer, Sumsion was steeped in the traditions of English cathedral music and the Three Choirs Festival, and his outlook must as a young man have been dominated to a large extent by Elgar; but the music of Elgar’s younger contemporary Vaughan Williams had more influence upon him, as the Air, Berceuse and Procession demonstrates. The first movement is fleet and scherzo-like, its principal melody a jaunty tune for whistling rather than singing. The modally inflected themes, parallel fifths and hemiolas of the finely wrought second movement underline the extent to which Sumsion had absorbed the music of Vaughan Williams (there is much here that could almost be by the master himself). The third movement is in A–B–A form, the flowing ‘B’ section again calling to mind Vaughan Williams, the sturdy ‘A’ section nodding occasionally in the direction of Percy Whitlock. Listening to this movement, it is not hard to imagine a civic procession making its way down the great Norman nave of Gloucester Cathedral, with Dr Sumsion seated at the console of the old Harrison & Harrison organ and playing this fine, stirring music.

Alexandre Guilmant (1837–1911) is the fifth and last Parisian organist in this programme. He succeeded Widor as Professor of Organ at the Paris Conservatoire, presided at Ste-Trinité from 1871 to 1901, and was Organiste Honoraire at Notre-Dame from 1902. As well as composing prolifically for the organ, he was a widely travelled recitalist and also a musicologist. His Choral: Was Gott thut das ist wohlgethan (‘What God does, that is well done’), the first of his Chorals et Noëls, Op 93, is a late work, dating from 1908 and dedicated to Joseph Bonnet. Its first movement is a limpid harmonization of the chorale melody; the second makes the chorale a tenor melody scored for basson, with the pedals responding in quasi-canonic fashion; and in the third, marked Adagietto, the chorale, remaining in the tenor, generates a two-voice canon, the second voice shadowing the first at a beat’s distance. The emotional core of the work is the penultimate movement, which Guilmant wrote in memory of his wife: here the chorale melody is in slow-moving, sepulchral pedal notes and the music inhabits the dark world of B flat minor. A vigorous four-voice fugue, Allegro moderato, brings the work to a powerful conclusion.

The last piece in this programme, the Variations on Weinen, Klagen, Sorgen, Zagen (‘Weeping, crying, sorrow, sighing’) by Franz Liszt (1811–1886), draws together a number of threads. Like the Widor work, it is based upon material by J S Bach, in this case the two-bar ground from the second movement of Cantata No 12 (a work from Bach’s years in Weimar, where Liszt was based). Like the Alkan piece, it ends in a blaze of F major grandeur, Alkan’s chorale-like melody having a certain amount in common (principally its first four notes) with the chorale melody used by Liszt, which is the same as the one on which the Guilmant work is based, i.e. Was Gott thut das ist wohlgethan. And just as Guilmant’s penultimate variation was inspired by personal tragedy, the Liszt work is a response to the death of his daughter Blandine. Written in Rome in 1863, the Weinen, Klagen, Sorgen, Zagen variations are a kind of pendant to the organ masterpieces Liszt completed in the previous decade – the Fantasia and Fugue on the chorale ‘Ad nos, ad salutarem undam’ (1850; recorded by Christopher Herrick on Organ Fireworks X, CDA67458) and the Prelude and Fugue on BACH (1855; recorded by Christopher Herrick on Organ Fireworks VIII, CDA66978). Although, like those works, it sounds highly improvisatory, it is in fact very tightly organized, the chromatically descending ground seldom being absent. Towards the end, the anguished chromaticism drains away in single notes and yields to a gentle diatonicism. The chorale melody, already familiar from the Guilmant work, is heard, simply harmonized and quietly registered; but what seems at first a benediction builds up to a triumphant expression of praise.