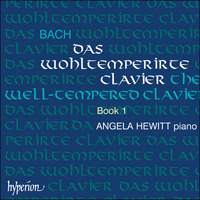 Here is Book 1 of Bach's immortal 'Forty-eight' played by Canadian pianist Angela Hewitt of whose recording of the Partitas Australia's Soundscapes magazine said: 'Only superlatives will do. My appreciation of this Canadian pianist is enormous; I classify her among the top performers of our time.' And Gramophone said of the same set: 'Hardline purists who baulk at the thought of Bach on the piano should put aside their convictions long enough to hear Angela Hewitt.'

Angela Hewitt's '48' (Book 2 will be issued next year) is destined to join the small list of the very greatest recordings of Bach's incomparable masterpiece.

The set is graced by her own absorbing and perceptive notes on each of the Preludes and Fugues, the subjects of which are all printed in the CD booklet.

‘The first recorded performances by a pianist of Book I that have made me want to hear them many times over. Strongly recommended’ (Gramophone)
‘Performances of exceptional grace and beauty … Angela Hewitt's version of Book I eclipses all others; hers will become the benchmark recording … special and uniquely enchanting’ (BBC Music Magazine)
‘An inspirational set’ (The Penguin Guide to Compact Discs)
‘The Canadian pianist may not regard herself as a Bach specialist, but her brilliant and profoundly musical playing of the first 24 preludes and fugues of the "48" goes straight to the top of available piano versions’ (The Sunday Times)