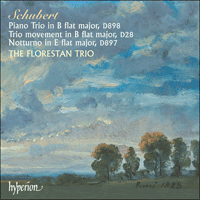 Hyperion is thrilled to be able to unite the remarkable talents of The Florestan Trio, deemed by Classic CD as 'among the finest chamber ensembles of the present day', with one of Schubert's greatest masterpieces, the magnificent Piano Trio in B flat major, D898. Of all the large-scale works of his last years, D898 is one that reflects the popular image of the carefree, companionable Schubert, pouring out a stream of spontaneous melody. From its soaring opening theme to the sublimated echoes of Viennese popular music in the finale, the music exudes life-affirming energy.

The 'Notturno' (so titled by the publisher) in E flat was the original slow movement of the B flat trio. Schubert's reasons for its eventual replacement remain unclear, but the work now stands alone most effectively as an entity of sustained melody and tranquillity.

The last work, the single-movement 'Sonate' (the composer's designation) was written when the composer was just 15. He was in self-consolatory mode and D28 was his immediate response to losing his treble voice, and with it his place in Vienna's Imperial Chapel Choir. An early work with apparent influences from Mozart, it is a work of great insight, lyricism and charm that reflect the despondent teenager's determination to lift his spirits.

‘This stands out among modern recordings of this fine work [and] the Movement in B flat makes a freshly endearing bonus. This will be hard to beat and one eagerly awaits the E flat major Trio’ (Gramophone)
‘Marvellously alive, the phrasing playful when required, delicate but never precious, [the trio] frolic through with palpable joy and an unerring sense of ensemble. Placed alongside this CD, even the Beaux Arts Trio, old favourites in this repertoire, start to look staid’ (The Times)
‘I urge you not to miss the Florestan disc which certainly becomes my version of choice for the B flat Trio and the early trio movement’ (Fanfare, USA)

Some time during the winter of 1822-23 Schubert became seriously ill with the symptoms of syphilis, tantamount to a death sentence in those days. And though there were extended periods of remission, for the remaining six years of his life his health was permanently undermined. It is, of course, dangerous to draw too close a parallel between an artist’s life and work, between, in T S Eliot’s phrase, ‘the man who suffers and the mind that creates’. Even so, it is hard to deny that much of Schubert’s music from the last years – Winterreise, the late string quartets and piano sonatas, the C major String Quintet – is suffused with a sense of evanescence, an awareness of impending doom. Yet amid this darkening inner landscape, the hedonistic, characteristically Viennese spirit of earlier works like the ‘Trout’ Quintet is never entirely lost. It reappears, for instance, in the Octet of 1824, a relaxation from the haunted, fatalistic string quartets in A minor and D minor written at the same period. And it permeates the lyrically exuberant Piano Trio in B flat probably composed during the late summer or autumn of 1827, a time when Schubert was also preoccupied with the last twelve songs of Winterreise.

Conjecture surrounds the B flat Trio, as it does so many of Schubert’s works. There is no surviving manuscript – and therefore no exact dating – and the composer never mentioned the work in his correspondence with publishers. But circumstantial evidence suggests that it was written shortly before the Trio in E flat, D929, whose autograph bears the date November 1827. Schubert’s first biographer Kreissle von Hellborn, drawing on the (admittedly not infallible) recollections of the composer’s friends, stated that the B flat was written ‘a little earlier’ than the E flat Trio, in September/October; and an investigation of the paper type used for the autograph score of the so-called ‘Notturno’ D897, long accepted as the original, discarded slow movement for the B flat Trio, has revealed that it is identical with the paper used in the autumn of 1827 for the E flat Trio and the finished copy of Winterreise. Beyond this, in January 1828 Schubert wrote appreciatively to his friend Anselm Hüttenbrenner of a public performance of a ‘new trio’ in the hall of the Gesellschaft der Musikfreunde on 26 December 1827, by three of the city’s leading musicians: the violinist Ignaz Schuppanzigh, the cellist Josef Linke (both members of the famed Schuppanzigh Quartet, which had given the first performances of the late Beethoven quartets), and the Bohemian pianist Karl Maria von Bocklet, a member of Schubert’s own circle. This ‘new trio’ could have been the E flat. But this was included as ‘new’ in an all-Schubert benefit concert in March 1828: and since ‘new’ traditionally denoted a public premiere, it seems likely that the work given at the earlier, December 1827 concert was in fact the B flat Trio.

Thanks above all to the example of Beethoven’s middle-period trios – the two works of Op 70 and the so-called ‘Archduke’ – the piano trio in the early nineteenth century was beginning to rival the string quartet in prestige. In Beethoven’s hands it had evolved from what was essentially an accompanied keyboard sonata designed for the amateur domestic market to a technically demanding, quasi-symphonic piece, usually in four movements, that treated the two strings and the keyboard fully as equals. Both Schubert’s trios seem to have been inspired by his contact with Bocklet, Schuppanzigh and Linke; and most amateur players of the day – especially string players – would have been fazed by the difficulties Schubert threw up in, say, the first and last movements of the B flat. One idiosyncrasy of Schubert’s trio writing is his fondness for allotting melodies to the piano with the two hands playing in octaves, a typical feature of the primo part in piano duets. This can make for delightfully airy, open textures, as in the passage near the beginning of the B flat Trio where the piano gives out the main theme pp against gently repeated quavers in the violin and pizzicato interjections from the cello.

Of all the large-scale works of his last years, the B flat Trio is the one that comes closest to the popular image of the blithe, companionable Schubert, pouring out a stream of spontaneous melody. From its soaring opening theme to the sublimated echoes of Viennese popular music in the finale the music exudes life-affirming energy, belying Schumann’s (to us) laughably sexist characterization of it as ‘passive’ and ‘feminine’, in contrast to the ‘dramatic’ and ‘masculine’ E flat Trio. Yet in the first movement, especially, the unfettered lyricism is underpinned by some of Schubert’s most subtle harmonic and structural thinking. The development builds the first theme to a strenuous climax, hovers on the dominant of F major and then slips magically to A flat major for a reappearance of the expansive second theme on the cello, counterpointed with the opening theme’s dancing triplets. In a series of typically leisurely sequences the music glides down via E major and C major to the brink of the tonic, B flat and a grand preparation, à la Beethoven, for the recapitulation. But instead of the anticipated triumphant return Schubert quietly and nonchalantly deflects at the last moment to the key of the flattened sixth, G flat major, only settling in B flat when the piano takes up the main theme. Beethoven never launched a recapitulation in a remote key like this. Yet Schubert here shows something of Beethoven’s power of long-range thinking: for the significance of G flat had been ‘flagged’, firstly by the G flat trill in the keyboard bass that momentarily ruffles the diatonic clarity of the main theme, and more prominently by the cello’s pivoting from F to an accented G flat in the cadential theme (a variant of the second subject) at the end of the exposition.

The E flat Andante is built on a sublime lullaby melody sounded in turn by cello, violin and piano, in the manner of a round, and exquisitely adorned with countermelodies. After a florid C minor central episode with a whiff of gypsy exoticism, the lullaby moves through a series of poetic modulations (A flat, E major, C major, then back to E flat) that echoes the tonal sequence in the first-movement development. The moderately paced Scherzo, enclosing a suave, waltz trio, has a puckish grace, with a deft and witty give-and-take between the instruments; as many commentators have noted, the first four bars are a virtual inversion of the opening of the ‘Trout’ Quintet’s Scherzo. In the sprawling sonata-form finale we meet Schubert at his most gemütlich. Contrast to the jaunty, echt-Viennese main theme is provided by a mock-heroic three-bar unison figure which crops up in assorted guises throughout the movement. Schubert reserves his coup de grâce for the start of the development. Here the unison figure’s three-bar structure and accentuation are cunningly fitted into a new metrical scheme (3/2 as oppposed to the original 2/4 time) as the players strike up a delightful rustic polonaise, complete with drone effects in the piano.

If the Notturno (so titled by the publisher) in E flat was indeed the original slow movement of the Trio, we can only guess at Schubert’s reasons for jettisoning it. But while it makes a less ready appeal than the Andante that replaced it, it uncannily prefigures the Adagio of the C major String Quintet, composed the following autumn. Indeed, it tends to sound like a trial run for the later movement, which realizes consummately the vein of timeless, contemplative ecstasy to which the Notturno aspires. Like the Quintet’s Adagio, it presents a mesmerically sustained melody in close harmony in the inner voices (here violin and cello) against a ‘plucked’ accompaniment in the treble and bass, with the piano doing a fair imitation of a harp. And as in the Quintet the contrasting central section moves to the key of the Neapolitan second, a semitone above the tonic: E major to F minor in the Quintet, E flat to E major (and a change from duple to triple time) in the Notturno. After an abridged reprise of the E major episode the coda, like that in the Quintet, contains a final harmonic shudder (with a sudden crescendo to ff) just before the closing bars.

The single-movement ‘Sonate’ (Schubert’s designation) offered here as a digestif was the fifteen-year-old composer’s immediate reaction to losing his treble voice, and with it his place in Vienna’s Imperial Chapel Choir. On 26 July 1812 he wrote in a score of a mass he had just sung: ‘Schubert, Franz, crowed for the last time’. And the following day he consoled himself by trying his hand at a trio movement in B flat, which he may originally have intended as the first movement of a larger work. Schubert had just begun studies with Antonio Salieri; and this B flat trio movement is one of several works from this time written in frank imitation of classical models. Mozart, rather than the more rigorously argumentative Haydn or Beethoven, is the obvious influence, though from the lyrical violin/cello duet near the start the cello plays a more emancipated role than in Mozart’s trios. The exposition, as in so many early Schubert works, is amiably discursive, while the brief and inconsequential development is elided with the recapitulation – a procedure that Schubert was to put to inspired use fifteen years later in the first movement of the great B flat Trio.