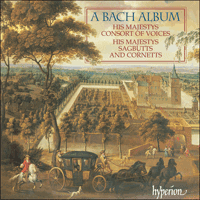 Bach's own transcriptions of his works are, on the whole, well known and well documented, but His Majestys Sagbutts and Cornetts perform here their own arrangements that have proved very successful in the concert hall.

This disc opens in a blaze of glory with the Sinfonia from the cantata Wir danken dir, Gott, wir danken dir (BWV29), itself a transcription by Bach of the familiar strains of the opening movement of his E major Violin Partita (BWV1006). This triumphant introduction sets the standard for the rest of this very special collection. Other highlights include an ingenious set of canons based on a theme from the 'Goldberg' Variations, discovered in 1974 on a blank page inside Bach's own working copy of the Goldbergs, and the lovely chorale O Jesu Christ, meins Lebens Licht performed here in its original guise before Bach himself arranged it for strings, oboes and continuo.

To hear all these works in such unfamiliar, yet extraordinarily beautiful, rich and rare sonorities can only be described as pure luxury.

‘A beguiling and brilliantly conceived programme, brilliantly performed. A special recommendation for a most delightful and unusual disc’ (Gramophone)
‘An engaging programme’ (BBC Music Magazine)
‘A fine example of a concept album that works’ (BBC Record Review)
‘The instrumental tone is very attractive and the standard of playing simply splendid’ (American Record Guide)
‘The Sinfonia to Cantata 29 is vibrant and exhilarating … this is certainly an interesting addition to the Bach catalogue’ (Cathedral Music)
‘Splendid performances … all done with taste and affection’ (Early Music Today)
‘The playing and singing are of course very good indeed’ (Scotland News)
‘This disc is a unique journey through some of Bach’s sacred music, with, as guides, an ensemble which takes an original approach to the music and comes out a winner … This is certainly one of the most interesting ‘derivative’ Bach albums I have heard in a long time’ (MusicWeb International)