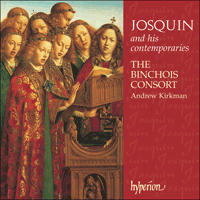 Josquin and his contemporaries

Josquin is one of those composers like Lalande (or De la Lande, Delalande) whose name we're never sure how to spell. Should it be Josquin Desprez, Josquin des Prez or Josquin des Prés. So we generally just call him Josquin. A Frenchman, Grove describes him as 'one of the greatest composers of the entire Renaissance and certainly the most important before the latter half of the sixteenth century'. Scholarship has revealed that much music ascribed to Josquin was in fact by other composers using his name and fame. On the other hand there is also much which he could have written but is not authenticated.

This disc by the award-winning Binchois Consort assembles some sublime music certainly by Josquin, and also works which may or may not be by his contemporaries.

The reputation of Josquin Des prés cast a long shadow after his death in 1521. Demand for his music, particularly in Germany, far outstripped supply, leading to the widespread reattribution to Josquin of pieces by other composers. Thus Georg Forster could famously recall in 1540 hearing ‘ … a certain eminent man saying that, now that Josquin is dead, he is putting out more works than when he was alive’. Yet if some of the pieces bearing Josquin’s name in these late sources look unlikely to say the least, others, more plausibly ascribed to lesser-known masters elsewhere, relate closely in terms of style to more verifiably authentic pieces. In considering these pieces, today sitting on the fringe of the Josquin ‘canon’, we should not forget that many of them had passed muster as genuine Josquin in the eyes of the most eminent aficionados of their day, men whose perceptions of Josquin, expressed in treatises and prefaces, form the bedrock of our understanding of him today.

This disc gives you the chance to judge for yourself: pieces whose places in the Josquin canon are as firm as seems possible in the present state of knowledge are set against others that, though widely assumed to be by Josquin in the sixteenth century, are now more plausibly assigned to others. Along with these pieces are others that are ascribed unambiguously to composers who, though less celebrated than Josquin both now and in the early sixteenth century, were capable nonetheless of rising, on at least some occasions, to heights comparable with those scaled by their better-known contemporary. Whatever the (considerable) financial incentive of printing spurious works under Josquin’s name, to ascribe a piece by someone else to Josquin may often also have represented a ‘seal of approval’, a sign of a high level of perceived quality. And, whatever the relations between our aesthetic perceptions and those of the mid-sixteenth century, listeners will surely agree that the pieces presented here – whether by Josquin himself or by a member of his ‘company’ – share not just stylistic common ground but also a high level of musical inspiration.

The authorship of our opening motet for St John the Baptist, Inter natos mulierum, has been disputed by scholars for decades. Though it is ascribed to Josquin in two of its three sources, none of these antedates the 1530s, and its full, sumptuous texture, lacking the clearly sectionalised musical architecture generally associated with Josquin, could support a date not much earlier than its first surviving copy. But whoever composed it, no one who hears this glorious piece, soaked in the resplendent sonorities that only five or more voices can afford, can doubt that it is fully deserving of a regular place in the repertory.

If Planxit autem David, a setting of David’s lament over his dead sons, strikes a tone to our ears less of lamenting than of considered contemplation, the eloquence of its text setting, with each elegantly sculpted phrase set off from the next, is unmistakable. In a famous description, the mid-sixteenth-century German theorist Heinrich Glarean commented that ‘ … throughout this entire song there has been preserved the mood appropriate to the mourner, who at first is wont to cry out frequently, and then, turning gradually to melancholy complaints, to murmur subduedly and presently to subside, and sometimes, when emotion breaks forth anew, to raise his voice again and to emit a cry; all these things we see observed very beautifully in this song, just as it is also apparent to the observing. Nor is there anything in this song that is not worthy of its composer. He has everywhere expressed most wonderfully the mood of lamenting …’.

Little known today, to Othmar Luscinius, writing in 1536, Nicolaes Craen was a model of all that was best about the modern style of composition, particularly in his Tota pulchra es: ‘Now Nicolaes Craen (a man, in truth, of outstanding natural qualities), has seemed to me, in his motet Tota pulchra es, to have very successfully ignored the practices of the old musicians: and we shall be able to learn from this how laudably he has moved beyond even the ancient laws.’ For Luscinius, Craen’s ability lay in his method and skill in ‘composing harmonies’, providing a model to be followed by all aspiring composers of his day.

Its great beauty notwithstanding, the chief claim to fame of Verbum bonum et suave lies in confusion over its authorship, a confusion offering clear proof that the cachet of Josquin’s name was as great in some quarters in the sixteenth century as it is today. Writing in 1558, the theorist Zarlino famously related ‘I remember what I have heard the most excellent Adrian Willaert tell many times, namely, that they used to sing that six-part motet Verbum bonum et suave under the name of Josquin at the Papal chapel in Rome on nearly every feastday of Our Lady. It was ranked among the most excellent compositions that were sung in those days. Now Willaert had moved to Italy from Flanders during the pontificate of Leo X [1513-21], and, finding himself in the place where they sang that motet, he noticed that it was ascribed to Josquin. When he pointed out that it was in fact his own, as it indeed was, such was their malice, or rather (to put it more generously) their ignorance, that they never wanted to sing it again.’

Veni sancte spiritus was universally accepted as a work by Josquin until 1985, when an attribution to his lesser-known contemporary Forestier was noticed in a manuscript considered to be of greater authority. Its credentials before that time seemed impeccable: ascribed to Josquin, it was showcased as the first piece in Ott’s collection of motets, Novum et insigne opus musicum, published in 1537-8, and, with its brilliant construction around two canons at the fifth, seemed every inch the expression of the better-known composer’s legendary contrapuntal brilliance. Whether by Josquin or not, Veni sancte spiritus is an extraordinary musical achievement, worthy to stand beside anything of its day; further, as one of the central pieces of the ‘Josquin canon’ recognised in the sixteenth century, it is an integral part of the picture of Josquin on which the modern view of the composer is based.

The four-voice De profundis has conflicting attributions to Josquin and ‘Champion’, presumably one of the brothers Jacques and Nicolas Champion who were employed in the Hapsburg Imperial Chapel in the first third of the sixteenth century. For Glarean, though, there were no doubts either about the authorship of this piece or its quality; for him it was the quintessence of Josquin, in both its beauty of expression and its novelty: ‘Here indeed I should like everyone to observe carefully how the beginning of this song is composed, with how much expression and how much dignity he has brought the phrase ‘De profundis’ … nor is he alone [in the modal practice of this piece] in a clearly immoderate love of novelty and excessive zeal to snatch a little glory by being unusual, a failing with which the more talented professors of disciplines are almost always afflicted …’ Original and unprecedented though the modal flexibility of this piece may be, in Glarean’s opinion Josquin ‘… has accomplished it learnedly and without giving the slightest offense to the ears’.

Like the Missa Da pacem, once considered a prime embodiment of Josquin’s late maturity, Ave caro Christi cara may more reasonably be ascribed to the highly gifted though much less familiar Noel Bauldeweyn. This conclusion certainly seems logical on the evidence of the sources: of four known to have existed, only the latest, a German print by Montanus and Neuber of 1564, ascribes it to Josquin, while of the other three, all apparently Netherlandish and some forty years earlier, two give it to Bauldeweyn. But the style and response to text in this elevation motet led Edgar Sparks to make a powerful case that the late ascription to Josquin may yet be the correct one: Sparks drew attention to the typically detailed musical architecture of the setting, with its subtle use of repetition and carefully graded alternations between fervent supplications in block chords and more active passages with more plangent counterpoint; on the other hand, he acknowledged the close stylistic relationship that exists between some works of the two composers. Whether the work of Josquin or Bauldeweyn, however, the extraordinary musical eloquence brought to bear by this motet on the collection of eucharistic prayers that constitute its text fashions an ornament of the utmost beauty for the elevation in the Mass – the central and summatory moment of late medieval Christian devotion – that it was created to adorn.

The ascription to Josquin of Recordare, virgo mater, which survives only in Antico’s second book of motets (1520) has long been seen as suspect. The texture of the piece, pitting three equal high voices against one lower one – a great rarity in itself – offers little to relate it to works whose ascriptions at present seem reasonably secure. Neither does the style of the piece, with its energetic, swirling motions and repeated returns, via surging scales, to cadences on the final, D, seem to draw the piece convincingly into the Josquin fold. What is beyond doubt, however, is the fascination of its mesmeric idiom, which carries the listener along with almost relentless energy through to its final climactic cadence.

Our wanderings through the fringes of the Josquin canon come to an end with a piece which, perhaps more than any other, might stake a claim to be its composer’s quintessential musical expression. Certainly the Pater noster / Ave Maria occupied a place very close to Josquin’s heart: this was the motet that, in his will, he asked to be performed posthumously before his house during all general church processions. Its heartfelt rendering of the two most fundamental Christian prayers respectively to God and the Virgin Mary, the prime intercessor, leaves no doubt of the acute awareness of its composer – admired and emulated by so many during his life and far beyond it - that he, like all of us, would end as dust. With the sublime intensity of its setting, and particularly of its unforgettable closing invocations, we are left with an abiding sense of Josquin’s mortality, and perhaps also of our own, ringing in our ears.