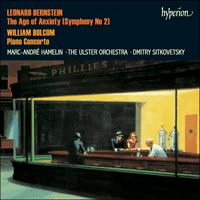 These two important American works for piano and orchestra are rather different stylistically but both are concerned with the very 20th-century issues of man's purpose in life and his place in a society when there are no longer any absolute values. As such they are far removed from the conventional idea of the concerto as display piece and both integrate piano and orchestra symphonically (indeed Bernstein calls his work a symphony).

Bernstein's The Age of Anxiety is based on a poem of that name by W.H.Auden and its contents follow closely the narrative of that work. It is a moving and predominantly sombre composition though The Masque section is an exhilarating, jazz-inspired piece.

Bolcom has, rather like Ives before him, always integrated the disparate styles of popular and serious music in his work and his concerto is no exception. The piece was written in 1976 as a cynical response to the glitz of the American bicentennial celebrations. Though the many quotations from American popular songs in the last movement are meant to be ironic, to most listeners their effect is of a riot of musical humour.

Though not much represented in his output for Hyperion, Marc-André Hamelin has long made a speciality of American contemporary music. His feel for jazz and the rhythmic drive of much of this music and his interest in popular North American culture make him the ideal interpreter for these major works.

‘Hamelin is on typically sparkling form’ (Gramophone)
‘To hear Bolcom's exuberant eclecticism on a bigger canvas, try the recording of the Piano Concerto on Hyperion … an air of bravura piano virtuosity, which the soloist Marc-André Hamelin brings off well’ (BBC Music Magazine)
‘Hamelin is outstanding’ (The Penguin Guide to Compact Discs)
‘Hamelin is faultlessly fluent’ (Classic FM Magazine)
‘Sparkling, electrically charged recordings’ (Fanfare, USA)
‘I like this record a great deal’ (Hi-Fi News)
‘The recording is everything one could want’ (Amazon.co.uk)

Leonard Bernstein rocketed to fame overnight when he stood in for Bruno Walter at the last minute and made his debut with the New York Philharmonic in a nationally broadcast concert on 14 November 1943. Of course he never looked back and soon after that he was conducting the major orchestras although he was composing too. In 1948 he became obsessed with ‘The Age of Anxiety: a Baroque Eclogue’ a long poem published that year by W H Auden (1907-1973), who had settled in New York in 1939. In 1948 Bernstein was in Israel conducting the Israel Philharmonic during the war of independence. The Dirge from Part Two of this symphony was completed there amidst historic events and premiered at Tel Aviv by the Israel Philharmonic under George Singer with Bernstein as soloist on 28 November. The whole work was dedicated to Serge Koussevitzky who gave the premiere with Bernstein and the Boston Symphony on 8 April 1949 at Symphony Hall, Boston, during his final season with the orchestra. Because Bernstein identified so passionately with the poem, seeing himself as pianist and ‘autobiographical protagonist’ in his symphonic realization, it is worth tracing the shadowy events within the poem.

Part One
A: The Prologue – four mixed-up characters in a Third Avenue bar try to sort themselves out: Quant, son of an Irish immigrant; Malin, a medical intelligence officer in the Canadian Air Force; Rosetta, a buyer for a big department store; and Emble, who is in the Navy. A very soft duet for clarinets is followed by a scalic descent on the flute acting as a ‘bridge into the realms of the unconscious’.

B: The Seven Ages – a four-fold discussion, ‘reasonable and didactic in tone’.

The seven variations, without a common theme, arise from aspects of previous sections.

1: A lyrical piano solo ending with the scalic descent on the harp.
2: Interactions between piano and orchestra.
3: Cantabile strings without piano.
4: A miniature scherzo in five-time (3/8 + 2/8).
5: A clarinet initiates a restless agitato.
6: A wistful piano solo.
7: Woodwinds lead into a long scalic descent from the piano.

C: The Seven Stages – seven more variations representing a dream-odyssey which symbolizes the inner journey of the four characters in various relationships leading to a ‘hectic but indecisive close’.

Part Two
A: The Dirge – expressing the feelings of the four as they take a taxi together to Rosetta’s apartment and lament the lack of a father-figure to disentangle their problems. The piano introduces the dirge with a rising Bergian twelve-note row. Bernstein described the middle section (mostly piano solo) of this ‘strangely pompous lamentation’ as of ‘almost Brahmsian romanticism’.

B: The Masque – now the group at the apartment is ‘weary, guilty, determined to have a party, each one afraid of spoiling the others’ fun by admitting he should be home in bed’. This is a brilliant jazz-derived scherzo with an enchanting accompaniment of harp, celesta and percussion.

C: The Epilogue – the party has purged the four characters of their past and they now look towards faith as ‘something pure’, symbolized by the sound of a solo trumpet preceded by a distant piano in the orchestra playing echoes of the jazz masque. Then the tone becomes serious: a kind of chorale with interpolations, a piano cadenza recalling earlier themes, more distant piano, followed by a slow affirmation. Originally the piano was left out of the epilogue, apart from the one solo chord at the end. But in 1965 Bernstein revised this section to keep the piano involved. The opening duet for clarinets, the third variation and the main theme of the Epilogue all come from earlier works (see Leonard Bernstein by Humphrey Burton, 1994), but the overall conception behind this symphony about the individual desperately trying to make sense of his/her own destiny is a recurring theme in Bernstein’s life and work. Here, in tandem with Auden, he embodies the dilemma in a unique way.

William Bolcom, born in Seattle, Washington, in 1938, is one of the most vivid characters amongst living American composers. As a performer he is a wonderfully idiomatic ragtime pianist and a stylish accompanist in all kinds of music, especially the repertoire he has pioneered with his wife Joan Morris. His refusal to segregate popular and classical idioms is an attractive feature of his Piano Concerto, a 1976 commission from the Seattle-based group PONCHO. The first performance was given at Seattle by the composer with the Seattle Symphony Orchestra under Milton Katims on 8 March 1976.

In his programme notes for the first performance of the Concerto Bolcom referred to it as ‘one of the bitterest pieces’ he had yet written. This was largely his reaction to the whole question of the American Bicentennial celebrations. With John Cage he wondered what could be celebrated with a straight face. However, it is difficult for music to be specifically ironic and Bolcom discovered that listeners enjoyed the riotous potpourri of popular tunes in his finale in much the same way that they respond to the last movement of Shostakovitch’s Fifth Symphony – at face value. He has pointed out that the Concerto is ‘a very direct piece … and in many ways a wry commentary on the Gershwin F major Concerto, particularly in its episodic form’. This does emerge, but overall, like Bolcom’s earlier ‘Commedia’ and later Fifth Symphony, the Concerto mixes styles in a way that is absolutely personal in a context where the soloist is far removed from the victorious hero of some nineteenth-century concerto scenarios.

I: Andante spianato – Allegro
The first movement opens with the simplest kind of C major walking bass from the piano in a way which recalls Milhaud, one of Bolcom’s teachers, or the opening of Copland’s Clarinet Concerto. The brass poke in some blue notes and then everyone starts to decorate. The episodes which follow alternate more dissonant styles with popular types. The piano hints at habanera, introduces pop music clichés, and then explores the sound of harmonics. There’s an intimate solo with a Spanish tinge which the piano shares around before getting into stride tempo to build to the climax. When it comes this is the opening C major texture exultant in the full orchestra followed by what the composer originally called ‘a terse, tragic coda’.

II: Regrets
If Bolcom had not told us that the second movement opens with what he calls ‘an ironic answer to the lovely clarinet beginning of the Gershwin Concerto slow movement’ we would never have guessed. There is much delicate question-and-answer between the soloist, marked ‘conversational’ to begin with, and the mood is introspective as if to create a foil for what comes next.

III: Finale
The slow movement runs straight into the finale, which is a mix-up that Bolcom tells us is ‘ridiculous and terrifying at the same time’. Charles Ives, with some of the same tunes, taught us the uninhibited enjoyment of such capers and it is notable that Bolcom completed his Concerto only two years after the Ives centenary. He has said that the finale is ‘intentionally like one of those TV cavalcades of the period, with every patriotic emblem heaved at us all at once in a mad collage’. It starts with fragments of ‘Yankee Doodle’; then introduces ‘Dixie’s Land’ and ‘Columbia the Gem of the Ocean’; then there’s a ‘pseudo-patriotic’ theme featured by the piano, but introduced just before by the cornet, which is Bolcom’s own. It feels like a nineteenth-century popular march complete with the barbershop chord routines. There’s a sentimental cornet solo in the middle, supported by bell effects, which turns into a country waltz then ups it into Broadway tempo. Occasionally the piano tries to be more sober – but not for long – and the ‘pseudo-patriotic’ theme comes back in the full orchestra with all the exhilaration of the real thing. Nobody but Bolcom could have dreamt up such a menagerie of Americana – triumphant in the end.