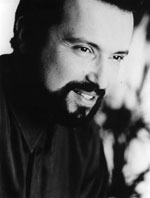 Dmitry Sitkovetsky was born in Baku, Azerbaijan, to violinist Julian Sitkovetsky and pianist Bella Davidovich. His father died in 1958, when Sitkovetsky was just three years old and the family moved to Moscow where Dmitry entered the prestigious Moscow Conservatory. In 1977, aged twenty-two, he decided to leave the Soviet Union and in order to do this, he registered himself as mentally ill. Fortunately his plan worked and Dmitry arrived in New York City on September 11, 1977, where he immediately began studying at the Juilliard School. Dmitry Sitkovetsky has built up a successful career as a violinist, conductor, arranger, chamber musician and festival director.

Sitkovetsky has performed as a soloist with a number of the world’s leading orchestras and he has performed at a number of high-profile festivals. He is also the founding director of the New European Strings Chamber Orchestra (NES CO), established in 1990, which is composed of distinguished string players from Eastern & Western Europe. Since his successful transcription of Bach’s Goldberg Variations for string trio, he has transcribed more than 30 works mostly for string orchestra. He has an active and varied recording career with an extensive discography which includes all the major violin concerti, numerous chamber music works as well as orchestral recordings that he’s conducted. Sitkovetsky’s increasing involvement in contemporary music and shows a keen interest in performing new repertoire. Since 1987 he has resided in London.