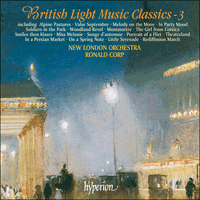 Another collection of favourites from an earlier generation—indeed from three earlier generations. Again the titles may not be familiar but in most cases the melodies will be. In Party Mood, for instance, may furrow a few brows until it starts to play, when it's safe to say that everybody in Britain over a certain age will immediately recognise it as the signature tune of the BBC's long-running 'Housewives Choice'. Alpine Pastures (1955) will be scarcely less familiar through its use as signature tune of another long-running radio series, 'My Word'. The first two volumes each included something by Albert W Ketèlbey and this one presents perhaps his best-loved piece, In a Persian Market from 1920, evoking images of camel-drivers, jugglers and snake-charmers, and heard here complete with its chorus of beggars. The earliest piece on the disc dates from 1898—Lionel Monckton's Soldiers in the Park from The Runaway Girl. It's perhaps better known by the first line of its chorus, 'Oh, listen to the band!'. Valse Septembre by Felix Godin has recently enjoyed renewed exposure in the film Titanic. We hear it here in the original orchestration.

21 delightful tracks altogether, sparklingly played, as usual, by Ronald Corp and his band of merry men and women of The New London Orchestra. Their manifest joy in making this recording is very apparent in this happy disc.

‘Ronald Corp and the New London Orchestra play with their familiar accomplishment and affection and, if anything, an even surer grasp of pace than before. The CD is gratifyingly full and excellently recorded. More, please!’ (Gramophone)
‘Throughout, Corp … has one great asset – charm, and I defy you not to sit listening to these appealing morceaux without a permanent grin on your face’ (International Record Review)
‘Corp’s performances are sumptuous’ (The Sunday Times)
‘An artfully cherry-picked selection played with affection and zest, which will leave you with a warm glow – and perhaps a feeling of regret that no one writes music like this any more’ (Classic FM Magazine)
‘If you've a soft spot for this kind of repertoire you'll love it’ (BBC CD Review)

With this third collection of ‘British Light Music Classics’ we offer yet more evidence of the extraordinary richness of this underestimated genre. The programme balances perpetual favourites against others whose one-time celebrity is now perhaps unfairly diminished. Only one of the pieces dates as far back as the nineteenth century. It is one of the most familiar numbers of that great master of melody, Lionel Monckton (1861–1924). The Runaway Girl (1898) was one of a series of Gaiety Theatre musical plays which he composed in collaboration with Ivan Caryll. The hit number was the song Soldiers in the Park, which is perhaps better known by the first line of its chorus: ‘Oh, listen to the band!’ It was probably Monckton’s regular orchestrator Carl Kiefert (c1855–1937) who arranged the full-scale orchestral march, with its contrasting trio section.

Monckton’s collaborator on those Gaiety shows, Ivan Caryll (1861–1921), was a bon viveur and larger-than-life character. Belgian by birth, he spent most of his mature years in Britain before moving to America. It was actually for America that he composed The Pink Lady (1911). This included the waltz song My Beautiful Lady, which London arranger H M Higgs (1855–1929) made the principal melody of the waltz on themes from the show.

Three other pieces in the collection date from that period of astonishing melodic richness just before the First World War. The Irish bandmaster Charles Ancliffe (1880–1952) was a light-music composer of particular accomplishment. He followed his famous waltz Nights of Gladness (1912) with others in similar style, of which Smiles, then Kisses (1913) enjoyed renewed familiarity after World War II with the craze for ‘olde tyme dances’.

Archibald Joyce (1873–1963) was a popular bandleader before and after World War I and, like Ancliffe, a successful waltz composer. He enjoyed lasting success with the waltz Dreaming (1911), but this was only one of a series of internationally popular pieces, of which Songe d’Automne (‘Autumn Dream’, 1908) was only marginally less successful.

French titles were very much in vogue at the time, as witness Valse Septembre (1909) by Felix Godin. One might wonder how a composer with such a French-sounding name finds a place in this collection; but that, too, demonstrates the mystique of anything French. It hides the identity of the more mundanely named Henry Albert Brown (c1864–1925), who under his nom d’artiste was, like Archibald Joyce, a popular dance-band leader before and after World War I. This waltz has recently enjoyed renewed exposure by featuring prominently among the period music played in the film Titanic. We hear it here in the original orchestration by Adolf Lotter (c1870–1942).

Among British light-music composers who enjoyed celebrity between the World Wars, three names stand out. Albert W Ketèlbey (1875–1959) was born in Aston, Warwickshire, and achieved his reputation with a series of pieces evoking exotic locations. One of the best loved is In a Persian Market (1920), evoking images of camel-drivers, jugglers and snake-charmers, and heard here complete with its chorus of beggars singing: ‘Baksheesh, baksheesh Allah. Empshi, empshi, empshi’.

Seemingly effortless in his creativity was Eric Coates (1886–1957), who hailed from Hucknall, Nottinghamshire, and who was without question the finest exponent of British light music. His march Music Everywhere (1948) became known as the ‘Rediffusion March’ because of its use as the call sign of Rediffusion Television.

The third member of this illustrious between-the-Wars trio was Haydn Wood (1882–1959), who was born in Slaithwaite, Yorkshire, and raised on the Isle of Man. Like Coates, he was a one-time composer of ballads who later turned to orchestral suites. From the latter, the swaggering march Montmartre forms the rousing finale of the three-movement Paris suite (1937).

Tolchard Evans (1901–1978) was a north Londoner who achieved celebrity between the Wars as a songwriter and dance-band leader. So successful was he at imitating the Spanish paso doble style in his song Lady of Spain (1931) that it was accepted with enthusiasm even in Spain itself. We hear it here in a concert arrangement by Ken Warner (1902–1988) from the original version by Fred Hartley (1905–1991).

Jack Strachey (1894–1972), born in Brighton, became known between the Wars for his theatre songs, among them ‘These Foolish Things’ (1936). Later he composed orchestral pieces for light-orchestral libraries, of which the two most popular are included here. The march Theatreland (1940) provides testimony to his love of the theatre and is heard here in its original orchestration by Don Bowden (1906–1966). The suitably jolly In Party Mood (1944) was for many years familiar as the signature tune of the BBC Light Programme’s Housewives’ Choice.

Vivian Ellis (1903–1996), a Londoner, was another of Britain’s leading theatre-composers between the Wars who likewise turned to light-orchestral composition. Coronation Scot (1948) has become a classic, but Alpine Pastures (1955) was scarcely less familiar at one time through its use as signature tune of the long-running radio series My Word. We hear it in the original orchestration by Sidney Torch (1908–1990). Sidney Torch was born Sidney Torchinsky of Russian parents in East London. A talented pianist, he became a theatre organist between the Wars as well as a prolific composer and arranger, and then conducted the BBC’s Friday Night is Music Night for many years. On a Spring Note (1952) may be counted among his most popular compositions—thanks largely to its use in the cinema for Pathé Gazette.

George Melachrino (1909–1965) was born in London and studied at Trinity College of Music, working as violinist, violist, saxophonist and clarinettist in various bands before directing his own dance orchestra at London’s Café de Paris. Of his various original compositions we here hear Woodland Revel, an insistent and engaging little piece dating from 1949.

Clive Richardson (1909–1998) was born in Paris of British parents and studied at the Royal Academy of Music. He composed a great deal of orchestral music, among it Melody on the Move (1946), which also gave its name to a radio series. It is heard here in an arrangement by Ronald Hanmer (1917–1994).

Among the outstanding post-World War II exponents of British light music was Ronald Binge (1910–1979). Born in Derby, he created the ‘cascading strings’ sound for Mantovani before revealing his compositional and orchestral inventiveness in a range of fine compositions. Here we sample the delicate charms of the fun-loving Miss Melanie (1956).

Harry Dexter (1910–1973) was born in Sheffield. Classically trained, he became a prolific composer and arranger in various styles, and it was he who founded the Light Music Society in 1956. His Siciliano (1953) takes its name from a lightly tripping dance style popular in the seventeenth and eighteenth centuries.

Finally we hear from three latter-day composers. Robert Farnon (1917–2005) was born in Canada and came to England as conductor of the Allied Expeditionary Forces Band in 1944. He was soon in demand as arranger and conductor, thanks particularly to a remarkable sequence of compositions which became highly popular in the late-1940s through exposure on radio—especially on the programme In Town Tonight. Among them was the aptly named Portrait of a Flirt (1947), which ends provocatively after flitting playfully between one rhythm and another.

‘Trevor Duncan’ (1924–2005) was born as Leonard Trebilcock in Camberwell, London. He was a BBC sound engineer for music programmes before the success of his early creations encouraged him to take up composition full time. The delightfully wistful The Girl from Corsica (1959) was inspired by a real-life Corsican girl he met on holiday one year.

Ernest Tomlinson, born later in 1924 in Rawtenstall, Lancashire, studied at the Royal Manchester College of Music. He has pursued a varied musical career as organist, composer, arranger and conductor, making many radio and television appearances. His most successful composition, Little Serenade, began life in a musical play The Story of Cinderella (1955). After being extracted as an independent piece, it became widely familiar, not least as signature tune for various radio and television programmes.