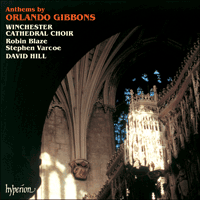 Orlando Gibbons was one of the most important English composers of the early 17th-century. He was a chorister at King's College, Cambridge, and later became a gentleman of the Chapel Royal, which he served as an organist and to which he later added the position of organist at Westminster Abbey.

He wrote forty anthems including the well-known This is the record of John—here sung by the brilliant young countertenor Robin Blaze—and is still regarded as one the of the great masters of the 'verse' anthem. A good example of a 'verse' anthem is Hosanna to the son of David where solos for one or more voices are repeated and reinforced with short choral passages. The 'full' anthem on the other hand does not use solo voices, as illustrated by the eight-voiced O clap your hands.

‘Sung with sensitivity and vigour. Vocal ranges are perfectly suited to Robin Blaze and Stephen Varcoe. Dovetailing between the solo and vocal sections is beautifully managed throughout, the countertenor quiet outstanding’ (Gramophone)
‘The choral sound is exemplary – clean, but edged with an appealing English softness … a glorious sound’ (BBC Music Magazine)
‘An essential addition to any collection of English church music’ (International Record Review)

When, during a tour of duty with the Chapel Royal at Canterbury, Orlando Gibbons fell victim to what was probably a brain haemorrhage on 5 June 1625, England lost one of her most gifted and versatile composers at the age of forty-one. Renowned as an adroit keyboard-player (a book published in 1693 describes him as the ‘best finger’ of his time), Gibbons was a musician whose skills could embrace composition for both sacred and secular forces with equal facility. He came from a musical family: his father twice migrated between Oxford and Cambridge, leading the town waits in both places. It was in Cambridge that Orlando’s elder brother Edward was born, probably early in 1568, while Orlando was baptized in Oxford on Christmas Day 1583. By 1590 the Gibbonses were once more in Cambridge where Edward became a Lay Clerk at King’s College from 1592, and Orlando began to receive his early musical training as a chorister in that choir from 1596. A mere seven years later he was to begin the major part of his short career at the Chapel Royal in London.

This was an age when patronage was of paramount importance to the church musician. Employment might be at one of the cathedrals or collegiate establishments, but in terms of prestige the aspiring would seek involvement with the Chapel Royal. There was, perhaps, a detriment to this: the monarch, particularly King James I, liked to be flattered, perceiving himself as divinely appointed—even divine in his own nature; his court musicians might therefore increase their standing by writing music to texts which could be open to a double interpretation. In the anthem Hosanna to the son of David the words ‘blessed be the king’ (the cry of the crowd at Christ’s entry into Jerusalem) might as easily be applied to His Majesty. Thus the existence of a setting of any particular text ‘proper’ to a season of the Church’s year may not necessarily imply the first liturgical usage of that music.

Gibbons’s church music covers two broad fields. On the one hand there are settings of texts for the ‘ordinary’ offices—the canticles for morning and evening prayer—and some festal preces and psalms. In contrast there are the anthems which themselves divide (as do the services) into ‘full’ and ‘verse’ types. The full anthem is self-explanatory: it is a setting for the full choir (exemplified here by Hosanna to the son of David and O Lord, in thy wrath rebuke me not) which might also be divided antiphonally, as in the large-scale O clap your hands. The verse anthem intersperses solos for one or more voices, usually from the start of the work, with short choral passages which repeat or reinforce the preceding solo material.

There is much in the style of the full anthems which clearly builds on the music of Thomas Tallis, one of Gibbons’s illustrious predecessors, who established what musicians for centuries would view as the epitome of achievement in English sixteenth-century polyphony. The verse anthems probably have their stylistic origin in the consort song, a secular solo form, accompanied by viols, which was developed for late sixteenth-century choirboy plays in which the ‘Children of the Chapel’ in London took part. In this format, transmuted into sacred surroundings, Gibbons developed a fluent and unmistakable style. Such music is the main focus of these recordings.

There is considerable argument about the pitch of instruments in cathedrals in this period—a problem which besets recordings of this type of music. There was no universal application of a standard and many places had their own notions of pitch, as they did of the time of day before the age of the railway. Each establishment existed in a form of local isolation. The evidence which has survived may therefore apply only to one particular place and not be a general indication. Many organs in England were destroyed or irreparably damaged by Commonwealth forces during the Civil War. When Thomas Thamar came to rebuild the organ at Winchester in 1665, whose pitch we know precisely, did he really impose an entirely new pitch on his instrument? Might he have been influenced by a survival of one or more of the largest pipes from the pre-Commonwealth organ? There are other places where this earlier ‘choir pitch’ was preserved. Of course this is only conjecture, but we have used it as the basis on this recording for the experiment in performing all the works at a lower pitch than has become customary over the past seventy years. It gives the alto parts a lower tessitura than modern singers have been used to, but it provides a far richer and less brittle sonority.

Only three of Gibbons’s verse anthems are scored for a single soloist. Two of them included here (This is the record of John and Behold, thou hast made my days) have the solo in the alto part, the voice most commonly written for among all the verse parts. The alto voice is also the one most frequently divided in the five-part textures of the choruses. Of the remaining verse anthems here, Glorious and powerful God features an alto-and-bass duet throughout the verse sections, while others use contrasting groups of soloists. For several of the anthems there are extant viol accompaniments which, given the total lack of evidence that these were ever used in church, may mean that secular performance was considered an alternative. This might point to the origin of some of the anthems not being entirely liturgical.

One anthem which clearly belongs outside the church, but which has here been given a religious sheen by performing its accompaniment on the organ, is Great king of gods. The main basis for its inclusion is its quality, and that it is otherwise left ‘stranded’ in the repertoire. It is an occasional piece written for the visit King James I paid to Scotland, amidst much local opposition, in 1617. Philip Brett has conjectured that it was given as the king arrived at Holyrood Palace, his entire Chapel Royal having travelled there from London by ship. In the 1870s a more directly ecclesiastical text, ‘Great Lord of Lords’ was substituted.

There are two settings of the evening canticles. The First or Short Service (not recorded here) is almost entirely homophonic and for full choir, whereas the Second Evening Service is an elaborate setting with numerous verses. The edition used has been prepared mainly from the version published in John Barnard’s compilation Selected Church Music of 1641. There are instances where this source does not include all the voices in the verses seen in other editions. At ‘for behold from henceforth’ the tenor, which has been known to modern editions since the 1920s, may be spurious; at the opening of the Nunc dimittis there has been an additional even more questionable treble part derived from the organ. The textual underlay, which E H Fellowes sought to modernize, has been restored and, in general, the organ accompaniments are heard in these recordings without the dubious benefit of the considerable accretions and ‘imitative ingenuity’ applied in his editions some seventy-five years ago.

The variety of texture and compositional devices in the verse anthems show Gibbons at his best, although his stature in this field has grown largely in the past forty years. Perhaps Fellowes’s readiness to adjust and ‘improve’ was because he originally held Gibbons’s full anthems to be superior, the verse anthems at ‘a decidedly lower level’. But the verse style was a product of its age and Gibbons its main exponent. Had he not died young, as John Harley has remarked, Gibbons’s innovation might have come to have been more directly influential. As it was, the verse anthem form itself, through Henry Purcell, Maurice Greene and William Boyce, became the basis of many cathedral anthems for a century and a half after Gibbons. In 1636, in his Principles of musik, Charles Butler was able to enthuse on the verse style: ‘a solemn Anthem, wherein a sweet melodious treble, or countertenor, singeth single, and the full quire answereth (much more when two such single voices, and two quires interchangeably reply one to another, and at the last close all together) … maketh such a heavenly harmony, as is pleasing unto God and Man’.