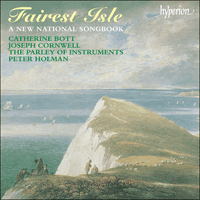 Until about 1970 every English child learned a repertory of 'national songs' at school. It included traditional songs from Scotland, Wales and Ireland, but the bulk of them consisted of English popular songs from the 'long eighteenth century'—roughly from the Glorious Revolution of 1688 to the accession of Queen Victoria in 1837. The repertory has often been thought of as 'folk music', but in fact it is quite different in character from the genuine folk songs collected in the late nineteenth and early twentieth centuries by Cecil Sharp, Percy Grainger and their associates. Despite the fact that they tend to deal with rural life, most of them are by professional 'art' composers working in London, and were written for the theatres or the pleasure gardens. Like many popular songs written more recently, they offer a nostalgic, urban evocation of the countryside, though they are none the worse for that. For this recording Peter Holman has mostly chosen pieces that can be traced back to an original setting by a named composer, though two of the beautiful settings of Scottish songs that J C Bach made in London in the 1770s have been included.

The most obvious way in which the developing sense of British national identity was celebrated in the repertory was through overtly patriotic songs such as Fairest Isle and Rule, Britannia, both of which can be heard here.

With many well-known songs, and sleeve notes which trace their source, this disc is sure to illuminate all!

‘Delightfully sung by Bott and Cornwell to a joyful accompaniment’ (Gramophone)
‘Stylish interpretations … elegantly shaped wind playing by The Parley of Instruments … the disc provides valuable insight into early 18th century music and national identity’ (BBC Music Magazine)
‘A winning disc’ (The Independent)
‘The performances share the brio and stylishness we associate with Holman’s Parley of Instruments team … this is a delightful mélange of Georgian Britishness in its different moods’ (International Record Review)
‘The Parley are on delightfully relaxed form, Holman’s direction unfailingly strikes the right note, and the singing exudes encore freshness. A winning collection all round’ (Classic CD)
‘A smashing disc’ (Classic FM Magazine)
‘This is one of those rare collections in which every one of its 16 pieces is a gem’ (Fanfare, USA)

Until about 1970, every English child learned a repertory of ‘national songs’ at school. It included traditional songs from Scotland, Wales and Ireland, but the bulk of the repertory consisted of English popular songs from the ‘long eighteenth century’ – roughly from the Glorious Revolution of 1688 to the accession of Queen Victoria in 1837. The repertory has often been thought of as ‘folk music’, but in fact it is quite different in character from the genuine folk songs collected in the late nineteenth and early twentieth centuries by Cecil Sharp, Percy Grainger and their associates. Despite the fact that they tend to deal with rural life, most of them are by professional ‘art’ composers working in London, and were written for the theatres or the pleasure gardens. Like many popular songs written more recently, they offer a nostalgic, urban evocation of the countryside, though they are none the worse for that. For this recording I have mostly chosen pieces that can be traced back to an original setting by a named composer, though I have included two of the beautiful settings of Scottish songs that Johann Christian Bach made in London in the 1770s.

It is unfortunate that this fine repertory, much of it over two centuries old, suddenly fell out of the public memory in the early 1970s; like the parallel repertory of eighteenth- and nineteenth-century English hymns, it is largely a closed book to my own children, now in their twenties, and their friends. I suspect that the words of many of the songs had begun to embarrass by their frank patriotism and their politically incorrect sexual attitudes, and the music was overtaken by modern pop music. However, in recent years historians such as Linda Collee have begun to reassess the nature of British or English identity, and have recognised that the repertory of national songs played an important role in establishing and defining that identity in the eighteenth and early nineteenth centuries; see her important book Britons: Forging the Nation 1707-1837 (London, 1992). In this spirit I offer this recording as a contribution to this reassessment, in the hope that it will play a part in rekindling interest in an important aspect of our national musical heritage. I would like to thank Jeremy Barlow, a pioneer researcher in the field, for his generous help and advice.

The most obvious way in which the developing sense of British national identity was celebrated in the repertory was through overtly patriotic songs such as Fairest isle, all isles excelling and Rule, Britannia. They both come from stage works that explore early episodes from British history: John Dryden’s semi-opera King Arthur (1691) and James Thomson’s masque Alfred (1740) respectively. Fairest Isle, Purcell’s most memorable minuet song, comes from a masque conjured by Merlin at the end of the play to demonstrate to the victorious King Arthur how Britons and Saxons will eventually become a prosperous, unified nation. Rule, Britannia, the ‘Grand ode in honour of Great Britain’, has a similar theme; it comes at the end of the play and was sung to Alfred, newly victorious over the Danes. Those who only know the corrupt version performed annually at the BBC Promenade Concerts will be surprised and delighted by Arne’s original, published in full score in 1742, with its charming echoes and its simple yet highly effective orchestration.

The version of The British Grenadiers recorded here was published in about 1770, and may well be the original, though the first half of the tune is similar to several sixteenth- and seventeenth-century tunes, and the references to ‘fusees’ and ‘looped clothes’ seem to refer to the equipment of grenadiers from around 1700 rather than the late eighteenth century. The fine arrangement in the Handelian idiom was printed in short score, with three-part choral writing similar to much parish church music of the period. The writing suggests the presence of trumpets and drums, which I have taken the liberty of adding.

Another less direct way of celebrating national identity was to place a love-story in a picturesque British rural setting. The most famous song of this type is James Hook’s The Lass of Richmond Hill, published in 1789 and said to have been sung by James Incledon (1763-1829) at Vauxhall Gardens. Its delightful orchestral setting features viola obbligato with pairs of flutes and horns supported by pizzicato violins and basses. J C Bach’s settings of The Broom of Cowdenknowes and Farewell to Lochaber also place love-stories in specific rural settings, and have beautifully conceived accompaniments for two flutes, two violins and continuo. They seem to have been written for the castrato Giusto Ferdinando Tenducci to sing in London concerts in the 1770s.

’Twas within a furlong of Edinboro’ town was often taken for a genuine Scottish song in the eighteenth century, but was actually written by Purcell or Jeremiah Clarke (there are conflicting attributions in contemporary manuscripts) for a play put on in London in 1695. Its realistic tone is matched by William Shield’s The Ploughboy, a satirical tale of a social climber with a delightful accompaniment for ‘little flute’ (recorder) and strings; The Milkmaid, ‘a Parody on the Ploughboy’, tells a parallel story of an ambitious village girl.

A number of the other songs recorded here were written for the London theatres. The most famous is When that I was a little tiny boy, a lyric sung by Feste in Twelfth Night. The setting by the tenor Joseph Vernon has an accompaniment for two violins and continuo, though an unaccompanied major-mode version of the tune is still sometimes sung in productions of the play. The Melancholy Nymph circulated as a popular song, but seems to have been written by Handel for a play by John Gay. It is one of the few works he wrote for the English theatre. Handel’s tune was used a few years later in The Beggars’ Opera (1728), along with Cease your funning, one of two tunes in the work that does not seem to have been borrowed from an existing song. The Miller of Dee comes from Thomas Arne’s ballad opera Love in a Village (1762) and uses a tune, ‘The budgeon it is a delicate trade’, that appeared in several ballad operas from the 1720s and ’30s. Only the first verse appears in Love in a Village, so we have added the others from a version published in The Convivial Songster (1782). Charles Dibdin’s Tom Bowling is justifiably the most famous sea-song of the eighteenth century, and is a delicate and subtle lament touchingly couched in naval parlance. Dibdin wrote it for one of his one-man-shows, put on in 1789 in an auction room in Covent Garden, where he accompanied himself at the keyboard and was apparently supported by two violins and cello.

The two instrumental pieces recorded here both use popular tunes. The Medley Overture by the little-known violinist Richard Charke was the prototype of a popular type of theatre piece in which popular tunes were combined in various ingenious ways. It starts with the ballad-opera tune ‘Dicky’s Walk’ which is soon combined with the march from Handel’s opera Scipio. In the repeated Allegro the identified tunes are ‘Adzooks’, ‘The Happy Clown’ (oboes and bassoon), ‘We’ve cheated the parson’ from Purcell’s King Arthur (in the bass), ‘Lilliburlero’, ‘Sir Eglamore’ (oboes and bassoon), ‘Girls and boys come out to play’ (oboes and bassoon), ‘Country bumpkin’ and ‘Tomorrow is St Valentine’s day’. The brief slow movement, harmonised in an intriguing mixture of 6/8 and 3/4, is slightly related to the tune now known as ‘Golden slumbers kiss your eyes’.

The Overture in G major by the immigrant oboist and composer Francesco Barsanti also uses ‘Country bumpkin’, but worked into an elaborate contrapuntal allegro movement. It is followed by a touchingly expressive Andantino and a minuet-like Allegro.