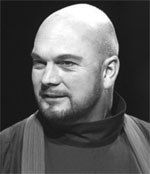 After studying music at York University and singing at the Guildhall School of Music and Drama, Joseph Cornwell began his career with The Consort of Musicke and the Taverner Consort. Singing under conductors such as William Christie, Harry Christophers, Eric Ericson, Sir John Eliot Gardiner, Robert King, Hervé Niquet and Andrew Parrott, his international engagements have taken him throughout Europe and to North America and the Far East. He also appeared in concert throughout the UK with orchestras including the Britten Sinfonia, the Northern Sinfonia, the London Mozart Players and the OSJ.