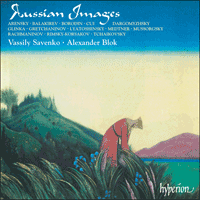 The songs on this disc are drawn from Vassily Savenko's recital series entitled 'Russian Images'—a kaleidoscope of songs and romances by some of Russia's best-known composers. The simple tunes are strong and lyrical and range from serious, romantic ballads such as Tchaikovsky's I bless you, forests, set to poems by Tolstoy, to the unusual: 'Listen you blockhead! … if one of them bites us we'll squash it right away!', text from Mussorgky's satirical song Mephistopheles' Song of the flea.

‘Savenko is a suave and accomplished singer, his phrasing beautifully shaped. Beautiful and evocative songs’ (BBC Music Magazine)
‘Vassily Savenko is something rather special … superb recital exploring a wide repertoire … an ideal introduction to the wealth of Russian song’ (Classic CD)
‘A voice of great expressive eloquence and power, rich in sonority and depth. A debut recital of great quality’ (Classic FM Magazine)

The songs on this CD are drawn from Vassily Savenko’s recital series called ‘Russian Images’ – a kaleidoscope of songs and romances by some of Russia’s best-known composers, as well as a few less familiar ones. Diverse vocal genres are represented in music by Glinka, Dargomyzhsky, Balakirev and his circle (‘The Mighty Handful’, which included Borodin, Mussorgsky, Cui, Rimsky-Korsakov), and by Russia’s most popular composer, Tchaikovsky. Works by Arensky and his pupils Gretchaninov, Medtner and Rachmaninov conclude the selection, interspersed by two songs of Boris Lyatoshinsky, a pupil of Glier (who was himself a pupil of Arensky) and thus linked to this group.

Composers such as Tchaikovsky, the Balakirev circle, Stravinsky and Shostakovich all paid homage to Mikhail Glinka (1804-1857) as ‘the father of Russian music’. His key works – the operas A Life for the Tsar (1836) and Ruslan and Lyudmila (1842) – established important precedents in Russian opera for subsequent generations. The two songs recorded here – Ah, the sweetness of being beside you (1840) and Bolero (from the song-cycle A Farewell to St Petersburg, 1840) – are representative of many of Glinka’s romances. Their Classical/Romantic duality, their clean lines in both voice and piano, are a simple musical language which allows the singer every opportunity to respond to the texts.

Alexander Dargomyzhsky (1813-1869), best known for his opera Rusalka, is an important innovator through his development of dramatic recitative in the opera The Stone Guest and in some of his many songs, including two of the three in this selection – the Pushkin settings The Night Zephyr (1862) and The Miller (1851). This innovation was later developed and extended by Mussorgsky in much of his own music.

Mili Balakirev (1837-1910), Alexander Borodin (1833-1887), Modest Mussorgsky (1839-1881), César Cui (1835-1918), and Nikolai Rimsky-Korsakov (1844-1908), collectively and affectionately nicknamed ‘The Mighty Handful’ (Moguchaya kuchka) by the famous critic Vladimir Stasov, are all represented here by some of their best-loved songs. Balakirev’s Embrace, kiss (1858) illustrates the composer’s lyrical style in a setting of words by Alexei Kol’tsov – a poet known for his ‘folksong imitations’. Borodin’s For the shores of your far homeland (1881) is a poignant setting of Pushkin which the composer was moved to write following the death of Mussorgsky. These are followed by two more Pushkin settings: Cui’s The Fountain Statue at Tsarskoye Selo (1899), a delicate miniature, and Rimsky-Korsakov’s classic example of mood-painting, the thematically oriental On the hills of Georgia (1866). Concluding this group are two songs by Mussorgsky – the famous ballad Forgotten (1874), inspired by Vassily Vereshchagin’s painting depicting the tragic fate of the Russian soldier and dedicated to the artist, and perhaps his most famous satirical song, Mephistopheles’ Song of the Flea. Dating from 1879, with words by Strugovshchikov based on Mephistopheles’ song from Goethe’s Faust, it was dedicated to Darya Leonova and became one of Feodor Chaliapin’s most popular pieces.

Peter Tchaikovsky (1840-1893) is perhaps Russia’s most popular composer, and his genius for ‘the beautiful self-contained melody’ has earned him universal and everlasting appeal. The three songs included here are all settings of poems by Count Alexei Tolstoy: I bless you, forests (1880) (from the poem Ioann Damaskin), a divine declamation, In the midst of the ball (1878), a tender, melancholy waltz, and Don Juan’s Serenade (1878), a bravura piece on a Spanish theme.

Anton Arensky (1861-1906) studied composition with Rimsky-Korsakov and went on to become Professor of Harmony and Counterpoint at the Moscow Conservatoire, where among his pupils were to be Rachmaninov, Medtner, Scriabin, Gretchaninov and Glier. His significant output includes stage works, orchestral, chamber, choral and keyboard music, and more than eighty songs and romances. In the lyrical, expressive style of Autumn, a setting of a poem by Afanasy Fet (1820-1892), Arensky aptly reflects the mellifluous language for which Fet’s poems are considered among the most musical in Russian literature.

Alexander Gretchaninov (1864-1956), who studied counterpoint and theory with Arensky at the Moscow Conservatoire, is best known in two fields of Russian music – liturgical music and children’s music. Here in this excellent Pushkin setting, The Prisoner, he displays expressive power in a song made famous by the great bass Alexander Kipnis.

Sergei Rachmaninov (1873-1943) and Nikolai Medtner (1880-1951) were close friends, but the two had quite different creative personalities and this is nowhere shown more clearly than in their songs. Rachmaninov – whose closest musical ancestor may be said to be Tchaikovsky – carried on the tradition of the Russian ‘romance’ begun by Glinka, whereas Medtner, despite his profoundly Russian character, had his musical roots planted firmly in the German Classical tradition. For both composers, vocal music was a significant part of their output; Rachmaninov published seventy songs, Medtner a hundred-and-six.

In the first of the Medtner pieces, an early Pushkin setting, I have outlived my aspirations (1903), the composer displays a fine lyrical melody. (He later made another setting of the same text, Op 29 No 5). The second piece, Spring Solace (1913-14), a setting by Tyutchev (after Uhland), is profoundly Russian in character. It is a plea not to be laid to rest in the damp earth but in lush grass with the sound of a reed pipe in the air. The opening vocal phrase imitates the pipe’s melody and its single accompanying piano chord is very reminiscent of Rachmaninov’s Georgian Song.

The two Rachmaninov songs are both from his Opus 14: She is as beautiful as noon (1896), a setting of Nikolai Minsky’s poem of resignation in the face of hopeless love, is contrasted by the final song, It is time (1896), a powerful setting of Semyon Nadson’s well-known poem in which the poet begs a prophet to come to the aid of a struggling people.

Boris Lyatoshinsky (1895-1968) was born in Zhytomir, Ukraine. A pupil of Glier at the Kiev Conservatoire, he went on to become a professor of orchestration at the Moscow Conservatoire. His creative output includes five symphonies and other orchestral works, two operas, choral works, numerous songs and much chamber music. His Two Romances, dating from 1942, depict powerful images of the anguish of war; the work was given its United Kingdom premiere by Vassily Savenko at London’s Wigmore Hall in June 1994.

In acknowledgement of the bicentenary of Alexander Pushkin (1799-1837), it is worth noting that this programme of Russian songs contains seven Pushkin poems in settings by Dargomyzhsky, Borodin, Rimsky-Korsakov, Cui, Medtner and Gretchaninov. Pushkin is Russia’s best-loved and most significant writer. Not only did he give the literary language of Russia its final modern form, he also used it to write poetry of such quality that it has never been surpassed in that country. Despite the shortness of his life – he died in a duel at thirty-seven – Pushkin’s output was prolific. He achieved masterpieces in several different genres, and even created one or two new ones. In addition to a novel in verse, Eugene Onegin, a major Shakespearean drama, Boris Godunov, a series of blank verse, Little Tragedies, and several prose stories, he also penned over eight hundred lyrics and a dozen narrative poems which inspired Russia’s greatest composers.

The Pushkin settings range widely in tone, from atmospheric evening scenes in Spain and Georgia (The Night Zephyr and On the Hills of Georgia) to an amusing ballad of infidelity (The Miller); the sadness of a double parting (For the shores of your far homeland), the depiction of a classical statue (The Fountain Statue at Tsarskoye Selo) and two sad lyrics, one of age and disillusionment (I have outlived my aspirations) and the other of bitter imprisonment (The Prisoner). The poems are well chosen and exquisitely set by the composers. Each demonstrates the poet’s remarkable ability to evoke a miniature scene, mood or character with the subtly modulated sound-effects of his beautiful native language.