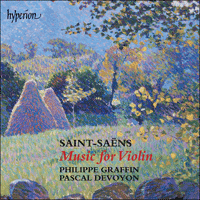 This selection of music for violin and piano spans many years of Saint-Saëns’s life from 1871 to 1920. Within it we can hear the variety of writing styles that Saint-Saëns used - the Sonata No 1 of 1885 is designed like Beethoven’s 'Kreutzer' Sonata, with a romantic Lisztian feel; the Sonata No 2, completed eleven years later, shows a clear classical leaning (it was first heard at a concert held in 1896 to celebrate the fiftieth anniversary of his first performance as an eleven year old!)

The Berceuse dates from 1871 and is dedicated to Paul Viardot, the violinist son of the celebrated singer Pauline Viardot, a close friend. A calm serene work, it has a simple, memorable melodic quality that places it close to Saint-Saëns's best-known piece, The Swan.

Philippe Graffin and Pascal Devoyon make a winning partnership—the proof of which can be seen in the reviews from their other discs on Hyperion in which they perform together. This disc is sure to receive an equal amount of praise.

‘Listen to this wonderful new disc from Philippe Graffin and Pascal Devoyon. From the turbulent emotions of the opening to the furiously driven moto perpetuo of the ultimately triumphant conclusion, they hold the listener spellbound … there is no doubt about the sheer pleasure which Graffin and Devoyon find in this music, with a performance enducing a wit and heartwarming intimacy that also extend to the smaller works … strongly recommended’ (BBC Music Magazine)
‘Fresh from the extraordinary success of his Saint-Saëns concertos, Philippe Graffin proves even more alluring in the French master's chamber music. This spellbinding performance had me lost in rapt concentration. The rarities that make up the rest of the disc are also sheer delight. A wonderful recording in every way’ (Classic CD)
‘Philippe Graffin is the sensitive violinist who often conveys a sense of rapture in this music. Pascal Devoyon is a splendid partner in this welcome recording’ (MDC Classical Express)
‘Graffin is one of the most elegant violinists of the younger generation, his performances of Saint-Saëns having that rare thistledown quality that creates a remarkable crystalline beauty … in passages of more substance, he is equally persuasive, despatching technical difficulties with consummate ease … in Devoyon, he has a partner that matches his radiant readings, the clarity of articulation complementing Graffin’s silvery tone’ (Yorkshire Post)

From his early childhood, Saint-Saëns’s musical enthusiasms inclined towards the great classical composers. He had begun to compose at the age of three-and-a-half. As he was impatient with the trivial music designed for children, his first piano teacher, his great-aunt Charlotte Masson, gave him the sonatas of Mozart and Haydn to study; at the age of five he received as a present the full score of Don Giovanni, which he began to study every day with delight. Later he was to approach Beethoven, Gluck, Bach, and the forgotten masters of the French baroque—Lully, Campra, Rameau—with equal passion. His natural curiosity extended to music of his own day, of course, and it was to the more serious-minded and innovative of these—Schumann, Wagner, Liszt and Berlioz—that he felt most strongly drawn. (The last two became close friends.) Yet Saint-Saëns was growing up in a Paris whose musical taste was often depressingly superficial and conservative—admiring the lavish productions at the Opéra and ready to applaud displays of vocal or instrumental virtuosity, but not prepared to tolerate music that demanded much concentration or whose language was at all unconventional. In this environment, it was no wonder the most gifted French composers—Berlioz, Gounod, Bizet, Fauré—all found it difficult to establish themselves. Saint-Saëns’s prowess as concert pianist and organist gave him a more secure base from which to launch his composing career; at the age of twenty-two he was appointed to the prestigious post of organist at the Madeleine. But it is significant that whilst his prolific output before 1880 includes eight of his ten concertos and all four symphonic poems—music whose brilliant instrumental writing and poetic character seem designed to ensure a wide popular appeal—there are only four major chamber music works (Piano Quintet, Piano Quartet, First Cello Sonata and First Piano Trio).

Saint-Saëns himself played a large part in fostering a change in attitudes. In 1871, in the aftermath of the Franco-Prussian War, he was involved in founding the Société Nationale de Musique, dedicated to the promotion of French music. He was the Vice-President of the new society and its committee members included Franck, Fauré and Lalo. Concerts of chamber music formed an important part of the society’s activities and Saint-Saëns often appeared as a performer—at the premiere of the Franck Piano Quintet in 1879, for instance. On that occasion his partners were the Marsick Quartet, and it was to Martin Marsick that he dedicated his Sonata No 1 in D minor, for violin and piano, completed in 1885. (Marsick is chiefly remembered today as the editor of the popular Massenet Méditation, and the teacher, at the Paris Conservatoire, of Thibaud, Enescu and Carl Flesch.)

The Sonata is a broadly-conceived work, designed, like Beethoven’s ‘Kreutzer’ Sonata, to create a brilliant effect in performance, especially in the finale, with its moto perpetuo motif. The four movements are arranged in two groups of two—as Saint-Saëns was to do again the following year in the famous ‘Organ’ Symphony—so that the only break comes after the Adagio. The dark, passionate opening theme has a remarkable rhythmic freedom, with its syncopations, cross-accents, and constant changes of time-signature. Its continual development contrasts strongly with the haunting second theme which, though it appears in different keys and contexts and with changes of texture, remains unaltered in outline. Marcel Proust confessed that this sonata provided the model for the fictional sonata by Vinteuil that plays such an important part in Swann’s Way. We can identify this second theme as the ‘little phrase’ that was, in Monsieur Swann’s mind, so intensely associated with his love for Odette. Though Proust’s detailed description of a performance of the ‘Vinteuil’ sonata doesn’t quite fit the Saint-Saëns, the ‘little phrase’ does return in the finale just as M. Swann expects. It also effects the transition to the sensuous Adagio, whose main theme is beautifully formed as a dialogue between the two instruments—a dialogue where the roles are later reversed and, towards the end of the movement, elaborately decorated.

The delicate minor-key scherzo that follows is, most unusually, formed almost entirely from five-bar phrases. Saint-Saëns clearly enjoys exploring the implications of this scheme. The subdued colours of this piece provide a perfect foil to the bright D major of the finale with its dramatic contrasts and virtuosic panache.

If Sonata No 1 represents the romantic, Lisztian side of Saint-Saëns, then the Sonata No 2 in E flat major, completed eleven years later, shows equally clearly his classical leaning. It was first heard at a concert held in 1896 to celebrate the fiftieth anniversary of his first public performance as an eleven-year-old. Sarasate, Saint-Saëns’s friend and colleague for over thirty-five years, played the violin part of the new sonata, and the composer also gave the first performance of his Fifth Piano Concerto.

With its regular formal outlines, the clear diatonic harmony of its opening bars and its Beethovenian motivic play, the sonata could be seen as a conscious attempt to recreate classical ideals, but Saint-Saëns avoids any sense of imitation or pastiche. In the first movement there are continual modulations, often quite unexpected and unconventional, and a remarkably free use of non-harmonic notes—notes that are foreign to the underlying chords. Together, these create a richly varied musical tapestry, the texture clearing every now and then to reveal a simple diatonic phrase.

The energetic Scherzo shows a classic regularity of form, with both scherzo and trio sections cast in the time-honoured binary pattern. The trio is one of several passages to show Saint-Saëns’s growing preoccupation with counterpoint; it’s in the form of a three-part canon, at the unusual interval of a 7th. The Andante encloses another miniature scherzo, or ‘Allegretto scherzando’, as its middle section. Here, as well as in the episodes of the Rondo finale, one feels that Saint-Saëns is adapting his beloved Rameau’s idea of the short character piece to a more modern idiom. In the Andante’s outer sections, the violin sings a long, dreamy melody above a piano accompaniment whose continual rising scales blur the harmony in an impressionistic way. Saint-Saëns disliked his younger contemporary Debussy’s music intensely, yet here he comes quite close to a Debussian fascination with sonority for its own sake. The final movement echoes the wide-ranging modulations of the opening Poco allegro, but in a lighter, less closely-worked style.

The Berceuse, Opus 38, dates from 1871 and is dedicated to Paul Viardot, the violinist son of the celebrated singer Pauline Viardot, a close friend. A calm serene work, it has a simple, memorable melodic quality that places it close to Saint-Saëns’s best-known piece, ‘The Swan’.

Triptyque of 1912 is formed of three contrasting character-pieces. Prémice (prelude, starting-point), gentle and wistful apart from a surge of passion near the end, shows Saint-Saëns’s continuing interest in unusual metres and rhythms. It is predominantly in 5/4 time (still fairly uncommon in 1912) whose ambiguities are exploited to make a delightfully flexible melodic line. The introductory passage for piano, however, suggests a quite different metre, of seven, quicker, quaver beats, so that it is some time before the true pulse of the music emerges. Triptyque was dedicated to Queen Elizabeth of the Belgians, herself a violinist, which perhaps explains the second piece’s title, Vision congolaise, whose modal inflexions, habanera-style rhythms and lazy tropical atmosphere recall the Havanaise for violin and orchestra of twenty-five years earlier. Joyeuseté is a brisk scherzo, virtually monothematic and notable for its sustained energy and vigour.

The two late Élégies are very different in character. Opus 143 (1915) is the more intimate, and from the first bars uses tonal ambiguity and continual modulation to create an unsettled, troubled atmosphere. The music develops free of formal restraints like, one imagines, one of the improvisations for which Saint-Saëns the organist was famous. The emotional expression of Opus 160 (1920) is more grandiose. This Élégie starts in a surprisingly foursquare way, though some of the composer’s usual subtleties of harmony and form appear later and help to build a powerful climax. It’s inscribed to the memory of Alexis de Castillon, gifted composer and co-founder with Saint-Saëns of the Société Nationale de Musique. Castillon (1838–1873) only found his voice as a composer in the last years of his life. Looking back over his long career, Saint-Saëns must have been struck by the contrasting destinies—his colleague who had died before achieving any renown, and his own life, full of public honour but extending into what must often have seemed an alien era, increasingly remote from the revered classical masters who had been his Aunt Charlotte’s contemporaries.