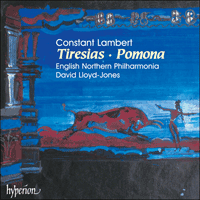 Constant Lambert—like his colleague Peter Warlock—tends to be remembered more for his personal charisma and tragically early death than for his music. Yet the twenty or so extended scores which he did compose (The Rio Grande and Summer's Last Will and Testament being perhaps the most well known) are every bit as worthy as those of his more famous contemporaries.

The bulk of Lambert's output was directed at the ballet, and he was the first Englishman ever to be commissioned by Diaghilev and the Ballets Russes– quite an achievement for a twenty-year-old. As a result of this, Nijinska commissioned Pomona, a ballet rich in the atmosphere of neoclassicism and the French dance music of the 1920s. Pomona shares with Tiresias a thread of sexual intrigue, indeed the stage requirements of the latter suggest it as a particularly improbable ballet subject: the lead changing sex, two snakes copulating, an argument about which of the sexes enjoys the sexual act the most … The work enjoyed considerable success during the early 1950s, but then fell from the repertory. This is its first recording, and uses the reconstructed score commissioned by the BBC in 1995.

‘A worthy successor to Hyperion's earlier Lambert discs’ (BBC Music Magazine)
‘This excellent premiere recording from Hyperion may well restore a major score to the repertory, even perhaps to the stage’ (The Times)