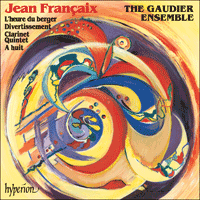 Jean Françaix: a quintessentially French composer following in the tradition of Saint-Saëns, Poulenc and Satie; composer of some one-hundred-and-fifty works; and virtuoso pianist in his own right.

The four works on this recording were composed between 1942 (the Divertissement—very much a 'distraction' during the Nazi Occupation of France) and 1977 (the Clarinet Quintet). All four share a high degree of compositional mastery, but this is always embedded within an air of grace, of profound charm, and of wit. It is perhaps this sense of humour which has so endeared Françaix's music to generations of musicians and music-lovers. But despite the facts that L'heure du berger was composed in honour of a Parisian restaurant who were to use it as 'background' music, that Françaix self-deprecatingly passed off A huit as a 'stop-gap to fill a programme' for the Vienna Octet, and that the Divertissement contains unashamedly blatant musical jokes, these compositions are unmistakably the work of an expert, a distinctively 'Gallic' artist.

‘Four delightful works. Music which is as easy on the ear as it is beguilingly performed. A magical disc ideal for unwinding after a long hard day at the chalk face’ (Classic CD)
‘An absolute must for every Françaix addict’ (Fanfare, USA)
‘An hour's worth of pure delight’ (Hi-Fi News)

The gentle, urbane music of Jean Françaix, at once fresh and engaging and invariably distinguished by an unerring sense of style and charm, has endeared itself to successive generations of musicians and music-lovers since the appearance of his earliest scores in 1931/2. His death in 1997 at the age of eighty-five removed from contemporary music one of its most immediately appealing masters, and the present collection of four examples of his chamber music featuring wind instruments offers an excellent conspectus of the prolific output of this distinctively Gallic artist.

Jean Françaix was born in Le Mans into a professional musical family. His father was the director of the Le Mans Conservatoire, and his mother was a noted professional singer, so the young boy could hardly have enjoyed a more sympathetic environment in which his musical gifts could flourish. He began writing music around the age of six, and within several years had been accepted as a pupil at the Paris Conservatoire, where he studied piano with the legendary Isidor Philipp and composition with Nadia Boulanger. It was Boulanger who conducted the premiere of Françaix’s first opera, Le Diable boiteux in Paris in 1938. By this time, however, Françaix had already begun to make a name for himself with his Concertino for piano and orchestra of 1932 (which he premiered and recorded with the Berlin Philharmonic Orchestra some years later) and with the magnificent String Trio of 1933. Quintessentially French, Françaix composed more than one hundred-and-fifty works, including five operas, thirteen ballets, three symphonies (one for string orchestra) and more than thirty concertos or pieces for solo instruments and orchestra, together with a large number of vocal works and much chamber and instrumental music. Although Françaix was capable of serious expression, as we find in L’Apocalypse selon St Jean (for four soloists, mixed chorus and two orchestras), the opera La Princesse de Clèves, the ballets Les Demoiselles de la nuit and Les Camélias, and the striking film score for Sasha Guitry’s film Napoléon in 1954 (starring Orson Welles and Erich von Stroheim as Beethoven), his music is more generally known and widely admired for its unpretentious charm and impeccable mastery of compositional technique.

In this regard, Françaix continued the line of French composers that includes Saint-Saëns, Grovlez, Poulenc, Ibert and Sauguet, together with elements of Ravel, Satie and Les Six, and, like many French composers of the past two hundred years, Françaix was much attracted to writing for wind instruments.

The four works in this collection span thirty-five years, from the Divertissement for bassoon and string quintet of 1942 to the Clarinet Quintet of 1977. The Divertissement was written at the time of the first performance of the oratorio L’Apocalypse selon St Jean, which took place in Paris in June 1942, and shortly after the composition of the Cantate en l’honneur de Sully (the tercentenary of whose death was marked in 1941). This was a troubled time for France, during the Nazi occupation, and, as if to rid himself of the daily privations, Françaix composed this delightful Divertissement. Some time later, he made a version for bassoon and string orchestra, yet—for reasons which remain unclear—the work was not first performed until 1968. It falls into four short movements, the first being a kind of moto perpetuo in which the basson bubbles along almost continuously over an entrancing string texture before a sudden ‘joke’ ending leaves us with a smile.

The second movement is a very simple structure as befits its relatively brief span. The music forms an idyllic study, as if idly contemplating a rural scene in high summer, and is based upon one idea that leads to several related fragments of themes. The reverie is banished in the jaunty scherzo movement, rhythmically irregular and full of tricky writing for the bassoon (as well as for the strings!). It is the bassoon, however, which seems to be the ‘odd one out’ until at last it joins the strings—almost!—for the ebullient brief coda. In the finale, after a peremptory opening gesture from the strings, the bassoon takes control of the music and gradually restores its authority, until the final quip—which takes everyone by surprise.

In 1947 Françaix composed his delightful suite for piano and wind quintet L’heure du berger, subtitled ‘Musique de Brasserie’ in honour of a noted Paris restaurant. This was a kind of musique d’ameublement (‘background music’ might be an apt translation) score, such as was written in those days especially for Parisian fashion shows and the like, but—as one might expect from this fastidious composer—it is so well written that it stands independently as a highly appealing score. Technically, Françaix uses variation technique in this work, which falls into three short movements. The first opens humorously with clarinet and bassoon passing a simple phrase, one to the other, as if we had a maître d’ noted for his fun ushering us to our table. A faster new theme appears as the waiters busy about us before the opening idea returns. The central slow movement has a languid atmosphere, decorated with clarinet arabesques which gradually grow and proliferate in brilliance to create a vividly fascinating scene. The finale is a dazzling piece of much rhythmic subtlety; music which smiles throughout and is adorable in its tingling good humour before a scrap of a music-hall tune glides across the fabric of the score. The rhythmic luminosity of the music returns to end L’heure du berger in a riot of colour.

Françaix’s octet A huit dates from 1972. Inscribed by the composer ‘To the revered memory of Franz Schubert’, and written for the same instrumental combination as Schubert’s Octet, Françaix’s score was commissioned by the Vienna Octet, who gave the first performance in Vienna on 7 November 1972. Françaix claimed, self-deprecatingly, that this work was asked for as the ensemble ‘needed a stop-gap to fill its programme’, but the result is one of the composer’s most organically subtle scores. The first movement opens with a slow introduction, given over to an evenly-measured theme that is passed between the three wind instruments and gradually builds to a climax before a perky scherzando idea, Allegrissimo, with soft pizzicato accompaniment, is upon us. This has a blues inflexion and is derived from the opening slow theme. It is first heard on the clarinet and in turn leads to a new theme on the horn; both themes are now developed in sequence—by bassoon and strings, strings alone, clarinet and strings, horn and strings, and so on—occasionally with lively counterpoint before the slower coda reminiscenza arrives. The urbane, not to say urban, Scherzo is fleet and delicately scored throughout, and the Andante slow movement has a splendidly relaxed and flowing air which never fades and which occasionally glimpses more troubled vistas. For all its charm and character, this music is never trivial, and in the endearing finale Françaix opens with a tutti call to action before sliding into a delicious waltz (leading to a late-evening liaison perhaps?) which surrounds various contrasting episodes before the splendid final coda.

The last work in this collection to be composed is the Clarinet Quintet, written in 1977 and first performed the following year in Munich. This is in four movements and exhibits a degree of compositional mastery that is wholly exceptional in music of its period. The work begins in pastoral vein, with a relatively lengthy idea which is developed until the clarinet asserts its individuality by cutting across the mood, leading to a lively new scherzando section in which the clarinet, now firmly in command, takes on the character of a true boulevardier. The pace remains very fast, but the clarinet, riding over the music, relaxes proceedings for a third section, a more considered view of the material, until the scherzando returns, playfully full of glee, to dance along to the final bars.

The dance-like element continues in the second movement, with scraps of thematic material woven into the texture, as light as gossamer and thistle-down, the whole controlled by an instinctive and admirable feeling for pace and structure. A solo viola idea (almost English in its inherent modality) opens the slow movement, to be answered by the clarinet and the other strings. A secondary, rising theme now follows, maintaining the warm and tender musical atmosphere, a feature of which is the highlighting of various instruments for brief solo passages—this aspect lends a widening of texture, almost visually panoramic, to the music. A gathering of forces ushers in a more anguished development from which the clarinet, in its chalumeau register, intones a lengthy theme of calm and graceful character. As the strings take this up, the clarinet weaves melismata around the strings, drawing the music to its close.

A gentle ‘motoric’ rhythm on the strings sets the finale in motion, before the clarinet enters with a dance-like jolly, salty tune. Formally, the finale is what might be termed a ‘sonatina-rondo’ with superbly varied episodes displaying much imaginative skill from the composer. A cadenza from the clarinet heralds the lively adieu.