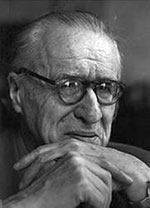 born: 23 May 1912
died: 25 September 1997
country: France
The gentle, urbane music of Jean Françaix, at once fresh and engaging and invariably distinguished by an unerring sense of style and charm, has endeared itself to successive generations of musicians and music-lovers since the appearance of his earliest scores in 1931/2. His death in 1997 at the age of eighty-five removed from contemporary music one of its most immediately appealing masters, and the present collection of four examples of his chamber music featuring wind instruments offers an excellent conspectus of the prolific output of this distinctively Gallic artist.

Jean Françaix was born in Le Mans into a professional musical family. His father was the director of the Le Mans Conservatoire, and his mother was a noted professional singer, so the young boy could hardly have enjoyed a more sympathetic environment in which his musical gifts could flourish. He began writing music around the age of six, and within several years had been accepted as a pupil at the Paris Conservatoire, where he studied piano with the legendary Isidor Philipp and composition with Nadia Boulanger. It was Boulanger who conducted the premiere of Françaix’s first opera, Le Diable boiteux in Paris in 1938. By this time, however, Françaix had already begun to make a name for himself with his Concertino for piano and orchestra of 1932 (which he premiered and recorded with the Berlin Philharmonic Orchestra some years later) and with the magnificent String Trio of 1933. Quintessentially French, Françaix composed more than one hundred-and-fifty works, including five operas, thirteen ballets, three symphonies (one for string orchestra) and more than thirty concertos or pieces for solo instruments and orchestra, together with a large number of vocal works and much chamber and instrumental music. Although Françaix was capable of serious expression, as we find in L’Apocalypse selon St Jean (for four soloists, mixed chorus and two orchestras), the opera La Princesse de Clèves, the ballets Les Demoiselles de la nuit and Les Camélias, and the striking film score for Sasha Guitry’s film Napoléon in 1954 (starring Orson Welles and Erich von Stroheim as Beethoven), his music is more generally known and widely admired for its unpretentious charm and impeccable mastery of compositional technique.

from notes by Robert Matthew-Walker ©