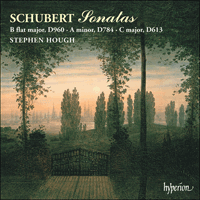 Schubert's Piano Sonatas, after a century of neglect, are now regarded as being among the most profound musical works ever written. Here Stephen Hough tackles the last, perhaps the greatest, of them—D960—in a performance of extraordinary depth and beauty.

Also included on this well-filled are the earlier masterpiece, D784, and the almost unknown D613 Unfinished Sonata which nonetheless contains much vintage Schubert and some wildly experimental writing.

Though entering a highly competitive field, this disc has nothing to fear from its rivals; these are performances sure to join the ranks of the very greatest.

‘His moving performance of the B flat Sonata, marked throughout by refined, discerning pianism and an uncommonly subtle ear for texture … Hough seeks out the music’s inwardness and fragility, its ethereal, self … communing remoteness … [D784] magnificently done … the lyrical music is limpidly coloured and poignantly inflected… Hough’s individual and searching reading of the two great sonatas … take their place alongside the most recommendable in the catalogue’ (Gramophone)
‘The recording is of exemplary clarity, warmth and truthfulness’ (Gramophone)
‘Especially sensitive in its uncertain switching between laughter and tears, a typically Schubertian trait reflected in Hough’s outstandingly delicate touch and his natural phrasing … these are profoundly musical and deeply thought-out performances’ (The Sunday Telegraph)
‘[D784] the pulsing triples … haunt the memory, as does the floating treatment of the lyrical subject in the finale’ (BBC Music Magazine)
‘It is obvious that Hough identifies deeply with this music … he is temperamentally attuned to its urgent lyricism and, sometimes, heartrendering pathos … lush tone, subtle pedalling, and a firm grasp of structure’ (American Record Guide)
‘Any pianist who records Schubert must be sure of his ground. Stephen Hough here proves himself a worthy rival’ (The Sunday Times)
‘Always thoughtful, in places transcendent’ (Classic CD)
‘This is, quite simply, some of the most beautiful Schubert I have heard in years, or (why not come out and say it?) ever. Irresistible. That is, indeed, the word for everything about this superb release … a musician capable of the greatest things … a performance that ranks with the most celebrated classic and modern versions in or out of the catalogs’ (Fanfare, USA)
‘[Hough] combines the imagination and pianistic colour of the past with the scholarship of the present, illuminating the very essence of the music he plays … a performance of extraordinary depth and beauty’ (Pretoria News)
‘Hough keeps listeners’ attention through the musical equivalent of whispering … a tribute to his elegant legato touch and phrasing as natural and unforced as breathing … Hough’s supernal playing and matchless poise make this album an unmitigated success’ (CD Now)
«Stephen Hough has made his name in the post-Romantic repertoire, exploring rarely-known works of interest … here in a more familiar repertoire he works wonders through an approach which is particularly sensitive and intelligent. His accompanying notes are particularly valuable» (Répertoire, France)
„Poetic, imaginative, deeply felt and keenly thought … a deeply loving treatment of the piano in performances of exceptional refinement“ (Piano, Germany)

To listen to someone is to put oneself in his place while he is speaking. To put oneself in the place of someone whose soul is corroded by affliction (malheur), or in near danger of it, is to annihilate oneself.

Those who are unhappy have no need for anything in the world but people capable of giving them their attention […] nearly all those who think they have this capacity do not possess it. Warmth of heart, impulsiveness, pity, are not enough. (Simone Weil)

Schubert, in his late piano sonatas, is revealed more as a listener than a speaker, the ‘heavenly length’ being that open-ended time which it takes for a person to respond to the suffering of another. The composer and performer thus enter into an intimate communion of hearts, and the audience can only ever be eavesdroppers. There is a contrast here with Beethoven, the declamatory prophet, whose individualism tends to manifest a will to power, to overcome; Schubert’s individualism is more a withdrawal into solitude, and a sense of being overpowered and overcome.

Both composers reached full maturity only to discover that they had serious, debilitating physical ailments—one a loss of hearing and the other syphilis; and there is something curiously enlightening in the nature of these afflictions which almost becomes manifest in their musical personalities. Deafness is like a brick wall to be confronted, it is tangible and local; whereas syphilis is more like an ocean to be waded into, uncertain, intangible, its horror creeping up on a victim unawares.

There is not really affliction where there is not social degradation or the fear of it in some form. (Simone Weil)

The Sonata in A minor, D784 (1823), and the Sonata in B flat major, D960 (1828), are the first and last of Schubert’s mature works in this form, and the former was almost certainly written at the time that Schubert first learned of the seriousness of his illness. The chilling desolation of its first movement’s first subject seems to be a direct response to that tragic news, the ‘strong-weak’ appoggiatura in bar 2 sighing wearily or angrily throughout the entire movement in both melody and accompaniment. However, as in so much of Schubert’s work, it is the moments of major tonality which seem the saddest. Perhaps only Mozart equals Schubert in this ability to transform the sunshine of a major key into a mood of heartbreak and pain.

The second movement is strangely unsettling for three reasons: because of the almost enforced normality of its theme after the bittersweet bleakness of the first movement; because this theme is doubled in the tenor voice, a claustrophobic companion seeming to drag it down; and because of the constant, murmuring interjections (ppp) between the theme’s statements. The helter-skelter finale introduces a note of panic, as triplets trip over themselves in their scurrying counterpoint. Here, as in the first movement, the glorious second subject, in the major, seems unsure whether to laugh or cry, calling to mind Rückert’s poem Lachen und Weinen which Schubert set the same year.

Beauty captivates the flesh in order to obtain permission to pass right to the soul. Beauty is a fruit which we look at without trying to seize it. (Simone Weil)

The opening movement of the Sonata in B flat major goes beyond analysis. It is one of those occasions when the pen has to be set down on the desk, the body rested against the back of a chair, and a listener’s whole being surrendered to another sphere. Here there is neither the superficial gloss of refinement nor the mawkish self-consciousness of profundity; rather Schubert’s miraculous ability to bare his soul without a trace of narcissism—a combined result of his humility, universality, and an exquisite unawareness of either.