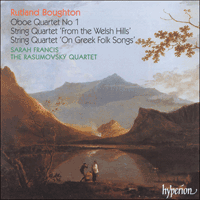 Although Rutland Boughton is rightly admired as an operatic composer, he contributed generously to virtually every musical genre from symphony to song. The two string quartets were written at the height of his popularity in 1923 and are works of much charm. The descriptive titles, of the individual movements as well as of the quartets themselves, do not so much present a 'programme' as suggest, in Boughton's words, 'the emotional pleasure one has in natural beauty of a certain kind'. The quartets were first performed at The Aeolian Hall, the advertisement stating that the concerts were 'not for high-brows, but for the general musical public who still believe in the common-chord and an occasional tune'.

In many ways the Songs without Words can be regarded as a second oboe quartet and are charming miniatures. Boughton had a particular love for the oboe (his daughter Joy was the instrument's leading exponent in England at the time) and this is reflected in his compositions.

‘Performances throughout are shapely and sensitive, the production is refined and the balance truthful. Fans of this colourful figure should acquire forthwith’ (Gramophone)
‘There is some gorgeous music here. All these works contain a fund of attractive melody. Music as directly appealing as this warrants a place in any collection of British music’ (Fanfare, USA)

Although Rutland Boughton is rightly admired as an operatic composer, he contributed generously to virtually every musical genre from symphony to song. Among his juvenilia are works for a variety of chamber ensembles, including string quartet, all written with a practical eye for what he and his friends might perform amongst themselves. Having served their purpose these apprentice pieces were destroyed and chamber music took a back seat in his musical preoccupations until much later in his career.

Boughton was born in Aylesbury on 23 January 1878. Despite evidence of an early talent for composition he did not receive much by way of formal instruction until 1901 when he was enabled to become a student at the Royal College of Music where, for five terms, he studied under Sir Charles Stanford. There followed a period of grinding poverty as he struggled to make a living from music. This was relieved in 1905 when Granville Bantock offered him a post at Birmingham’s Midland Institute of Music. Success as a singing teacher, conductor, and composer soon identified him as one of the most promising talents of his generation. In 1911 he left Birmingham to follow his dream of an artistic commune built around festival performances of his music dramas – in particular the Arthurian cycle he had begun in 1908. Aided by the poet Reginald Buckley and the artist Christina Walshe (who became his second wife) he established himself in Glastonbury and in August 1914 launched the first Festival.

Though necessarily carried out with the minimum of financial resource and the maximum help from local amateurs and professional friends, the Glastonbury Festivals developed into an important aspect of the British operatic scene: an outlet for experimentation and a learning-place for young singers. Audiences came from all over Britain and included the most respected musicians, artists and writers of the day. The Festivals continued with increasing success and sophistication until 1926, when Boughton’s need publicly to declare his strong socialist principles (he outraged opinion by presenting his Nativity opera Bethlehem in modern dress, with Christ born in a miner’s cottage, and Herod as a representative of all that was evil in capitalism) undermined local support to such an extent that in July 1927 the Glastonbury Festival Players were forced into liquidation.

By this time, however, Boughton was internationally famous as the composer of The Immortal Hour – a music drama which, after its premiere in Glastonbury (1914), took London by storm in 1922/3. With the collapse of the Glastonbury venture Boughton retired to a remote corner of Gloucestershire, there to complete his Arthurian cycle and to attempt further festivals (at Stroud in 1934 and Bath in 1935). He also began to diversify into orchestral and chamber music, completing his second and third symphonies, a series of concertos, and finally a number of chamber works. He died in London on 25 January 1960.

The String Quartets
Boughton’s string quartets were written in 1923, at the height of his London success with The Immortal Hour. The first, in A major and based on Greek folk song, is dated June–July; and the second, in F major and subtitled ‘From the Welsh Hills’, August–September. Both reflect the buoyant mood brought about by fame and fortune and the acquisition of a third wife, Kathleen. Indeed, the F major quartet is a loving souvenir of a holiday they spent at Beddgelert in August 1923. Both quartets were first performed at a series of three chamber concerts he presented in London’s Aeolian Hall in 1923: the ‘Greek’ quartet on 12 October, and the ‘Welsh’ on 19 October. Critical reaction was decidedly mixed.

Typically, however, Boughton had caused offence by advertising his concerts as being ‘not for high-brows, but for the general musical public who still believe in the common-chord and an occasional tune’, and offered an even greater hostage to fortune by adding that there were to be ‘no free tickets even for “the profession”’. At the third concert (26 October) he repeated the quartet (the ‘Greek’) which the critics had most disliked.

Though a medium as complex as the string quartet is scarcely calculated to appeal to the ‘working men and women’ whom Boughton sought to address, it seems that the actual performances were not as immaculate as they might have been. The critics, therefore, could only make of them what they heard. And certainly both quartets test to the utmost the skill and agility of even the most dedicated performer. Their movements follow traditional Classical formulae with a degree of rhapsodic freedom that makes them difficult to grasp at a first hearing. The subtitles Boughton gave to each movement may also have been more of a hindrance than a help, though each was intended only as an indication of ‘the preponderant emotion’. Nor can the fact that he insisted that the audience listen in a darkened auditorium, with the players behind a screen, have added to the success of the occasion.

In addition to the descriptive titles given to the movements of the ‘Welsh’ quartet, Boughton added a further gloss to its first two movements (‘Purple and Gray’ and ‘Green and Gold’ respectively) but warned that the music was not to be thought of as programmatic except in the sense that it was a personal reaction to ‘the emotional pleasure one has in natural beauty of a certain kind’. About the third movement, ‘Satire’, he was more explicit, declaring that it mirrored his distress at finding that Snowdon had fallen victim to civilization – in particular to an undignified, tin-hut ‘hotel’ at its summit. As to form, this he declared to be in accord with Classical precepts and therefore in need of no explanation. He said nothing about the obvious influence of folk song, or whether he had made use of genuine Welsh material. Given his flair for inventing tunes that deceived even such informed collectors as Vaughan Williams, the question must remain, at least for the time being, unresolved.

A question also hangs over the thematic material of the ‘Greek’ quartet, though in this instance Boughton admitted the incorporation of folk song. Unfortunately he did not specify particular tunes, their source or vintage. All that he did allow was that the material had been derived from incidental music (now lost) that he had composed for the Glastonbury Festival’s 1922 production of The Trachiniae of Sophocles, and to a lesser extent from modal studies he had undertaken before setting to music Gilbert Murray’s translation of the Alkestis of Euripides (Glastonbury, 26 August 1922). Again, the quartet’s movements, though proceeding almost without a break in pairs, are given subtitles as ‘clues’ to their emotional content, but these are also declared to have ‘no further meaning or value’. The third movement, however, is by way of being a memorial to Sheerman Hand, whose untimely death (suicide?) in September 1922 had deprived Boughton of a friend and trusted administrator.

Oboe Quartet No 1
Boughton’s interest in the oboe stemmed from the fact that his third daughter, Joy (1913–1963), had become one of this country’s outstanding soloists. She had been a pupil of Leon Goossens, and it was for her that Britten would write his Six Metamorphoses after Ovid in 1961. Boughton celebrated her skills with two oboe concertos and two oboe quartets, plus a number of shorter works as encore pieces for her recitals. The Oboe Quartet No 1 was composed in March and April of 1932, Boughton recording in a letter dated 13 April that he had ‘just written a quartet for oboe and strings – small, sweet and Spring-like; with some of Spring’s sadness in it though’. It is as good a description as any of a delightful work: its first movement in sonata form, with fugal passages; its second a brief scherzo; and its third a set of six variations on a folk-like theme. Joy Boughton performed it on many occasions, though the date of the first performance has not been recorded.

Three Songs without Words
The Three Songs without Words, composed probably in 1937, were also dedicated to Joy Boughton. Each movement is based on one of Boughton’s songs and, despite the title, the effect is of a third oboe quartet. The first song belongs to incidental music he wrote in 1935 for Isolt, a play by Antonia Bevan Williams. The original opening words echo Housman: ‘Out of a sigh an air that blows’, and the title is given as ‘The Birth of Song’. In his quartet version Boughton changed the title to ‘Whence!’ and quotes the line as ‘Out of a something that no one knows’ – presumably to underline the sense of mystery.

‘Faery Flout’ is based on a setting of a poem by Mary Webb (1881–1927, author of such popular pastoral epics as ‘Precious Bane’ and ‘Gone to Earth’ – devastatingly parodied by Stella Gibbons’ novel Cold Comfort Farm). The opening lines tell all:

The faery people flouted me
Mocked me, shouted me;
They chased me down dreamy hill
And beat me with a wand.

‘Barcarolle’ refers to a poem by Eimar O’Duffy (1893–1935), an Irish prose satirist and member of the Irish Republican Army. The opening lines seem only faintly relevant to the title:

Boughton’s setting has not survived, though it may well belong to 1931 when he undertook to collaborate with O’Duffy on a musical comedy entitled Butterflies and Wasps that was designed to excoriate contemporary society. Fortunately, perhaps, the enterprise did not get beyond a rather lame libretto and sixty-six pages of very tentative musical sketches. Wherever Boughton’s theatrical genius may be judged to lie, it was certainly not in realms where Cole Porter and Noël Coward reigned supreme.