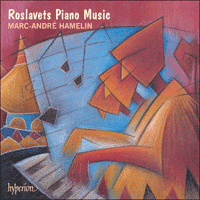 Roslavets was the most radical of all Russian musical innovators in the early decades of the twentieth century. His so-called 'new system of tone organization' involves highly original manipulation of 'synthetic chords' and transposition throughout the twelve degrees of the chromatic scale. As for so many composers, the genre of the piano miniature became Roslavets' chosen vehicle for much of this experimentation.

The pieces on this recording span much of the composer's mature career, from the Three Compositions of 1914 to the Sonata No 5 of 1923 (the three Sonatas presented here are numbered 1, 2 and 5—Nos 3 and 4 are lost). The Three Études are among the most daunting of piano music around, using as many four staves at moments of emotional climax.

(As a point of reference, Roslavets' piano music may best be compared to the later works of his compatriot Scriabin—Hamelin goes so far as to say 'Scriabin on acid'!)

‘This finely recorded recital confirms Hamelin's place as one of the most enterprising and virtuosic performers of our day’ (Gramophone)
‘Roslavets is ideally served by Hamelin who relishes the elaboration and sorts it out with his customary acuteness of ear for quality and balance of sound’ (BBC Record Review)
‘Roslavets is a most compelling musical presence. For those interested in digging beneath the surface of 20th-century Russian culture, musical and social, grab this disc’ (American Record Guide)
‘Hamelin's playing remarkably demonstrates a phenomenal set of fingers and a hyper-accurate ear. Variable but exotic and intriguing music, immaculately played’ (Classic CD)
‘Canadian super-pianist Marc-André Hamelin captures their individuality and multilayered complexity with superb aplomb’ (The Irish Times)
‘Marc-André Hamelin, the thinkers' virtuoso, has restored a major composer to history. Wonderful music … [the] performances are a miracle of dexterity and understatement’ (Soundscapes, Australia)